"That We May Come to Believe"

I was over on O‘ahu the last two days attending a series of meetings. Four of us flew in from Maui. Others came from Kaua‘i and Hawai‘i island as well as O‘ahu.

Overnight accommodations were made at the Pagoda Hotel in downtown Honolulu. After dinner on Friday evening, I made my way to the elevator to get to my room. Someone was holding the door open.

There was the obligatory exchange, “What floor?” and the glance upward as though there was something to look at above the inside elevator wall above the doors. There’s the awkward attempt at wanting to be cordial. 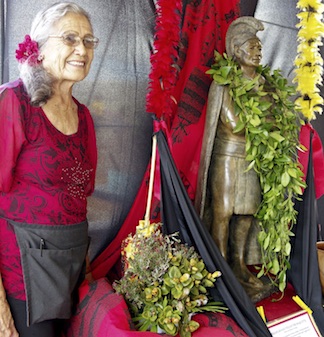 Before the elevator door could close two of my dinner companions Auntie Aletha and Joclyn arrived and so we held the doors open for another moment.

I turned to the man and said, “Auntie is from Kaua‘i too.”

Jocyln was quick to volunteer, “I’m from Maui.”

And for a brief moment, we all looked at that same spot above on the inside wall of the elevator as though there was something to see. “Oh,” Auntie said as she turned to look at the man aware that he was also from Kauaʻi.

She continued, “My late husband and I are from Hanapēpē.”

“I used to live there too,” he responded. “But I live in Hanamāʻulu now.”

The conversation took its natural course for those of us who have grown up here in Hawaiʻi. “What is your family name?” Auntie asked.

“Richard?!” Auntie said with a sudden look of astonishment and recognition in her eyes,

“Aletha?!” he said as he looked at her with an equal look of astonishment and recognition.

They smiled and laughed. As they continued speaking their conversation became more and more animated. “Yes,” Auntie replied, “I was married to Mervyn.”

“You are as beautiful as ever,” he said.

“You look so different,” Auntie added.

I learned later that Auntie’s husband and Richard were best friends. They grew up as neighbors to one another and played football together from “small kid time.”

The elevator pinged as we reached the ninth floor for Auntie and Joclyn. They bid us good night as we bid them good night. Richard and I continued on to the eleventh floor.

It was a simple encounter; in some ways a chance encounter that I know brought back memories for Auntie Aletha and Richard. It was a moment of great joy for them and a moment that both Joclyn and I celebrated.

I thought back of how, at first, Auntie seemed uncertain about who he was but as they talked with each other she began to recognize him from her memories of the past.

Auntie explained to me the next morning, “My husband died over thirty years ago. I had not seen Richard for many, many years since that day. He looked so different,” she said repeating what she had said to him the night before. She described how he was no longer the bulked-up football player.

As we gather here this morning on the Third Sunday of Easter, we come aware of other stories of recognition and amazement that were told long, long ago – stories of the appearances of Jesus following his resurrection. Those who saw Jesus were filled with joy, but at first they themselves were uncertain.

“How could this be?” they wondered.

Matthew, a former tax collector who was called by Jesus to be one of the twelve apostles; Mark, who was a follower of Peter; and John who was a disciple of Jesus and possibly the youngest of his twelve apostles all had their stories to tell. Our story this morning does not come from Matthew, Mark or John but from Luke.

Luke provides us with his account of how the disciples reacted to the appearances of Jesus. We learn from Luke that they were “startled and terrified” (Luke 24:37); “frightened” and doubtful (Luke 24:38); “disbelieving” and marveling (Luke 24:41) - all at the same time - at what they were witnessing.

The Rev. Barbara J. Essex is an ordained minister of the United Church of Christ. She is currently the Executive Director of the United Protestant Campus Ministries in Cleveland, Ohio, and serves as an ecumenical voice on three campuses. She shared her reflections on our reading from Luke.

“The disciples and others gathered in Jerusalem [that day] were immersed in chaos and confusion – fear, frustration, guilt, grief, doubt, anxiety, suspicion, distrust, restlessness, despondency and terror.” Jesus, whom they choose to follow, was now dead and his blood-stained and wounded body was missing. “In the midst of their escalating alarm,” she writes, “out of nowhere, Jesus himself appeared” (Feasting on the Word, Year B, Volume 2, Bartlett & Taylor, Westminster/John Knox Press, Louisville, Kentucky, 2008, page 425).

Down through the centuries much has been said about the resurrection appearances of Jesus. The questions we raise today about the appearances were questions that were raised by the earliest Christians.

We are told that they met and saw Jesus. They ate with him. They touched him.

But there others who were uncertain, then and now, about whether or not there was a resurrection (Acts 23:8). Others assumed his appearances were those of a spirit or ghost. But by speaking with them, eating fish with the disciples, and letting them touch him, Luke presents us with a Jesus who is not ghost but “a living, walking, talking and eating Jesus,” alive as they themselves were (Ibid., pages 425-426).

It was out of the accounts recorded by Luke, John, Mark and Matthew that the doctrine of Jesus’ bodily resurrection came to be. In the early church there were those who had doubts, others who objected, while some saw the rejection of his bodily resurrection as a heresy.

In the centuries that followed, Ignatius, a second century bishop and martyr, warned Christians not to deny the reality of Jesus’ resurrected body in favor of a spiritual resurrection (Letter of Ignatius to the Smyrneans, Early Christian Writings, A. Louth, Penguin, London, 1987, page 85). In the third, fourth and fifth centuries, others affirmed the full reality of human nature in Christ.

In “Seven Stanzas at Easter”, the late American poet and novelist John Updike underscores the centuries-long insistence that the bodily resurrection of Jesus was and remains the key to the story of Easter. Updike wrote:
Make no mistake: if he rose at all
It was as his body;
If the cell’s dissolution did not reverse, the molecule reknit,
The amino acids rekindle,
The church will fail.

All of this is to say, that the resurrection appearances were a big deal for many in the early church. It remains a big deal for many in the church today. We know those who witnessed the resurrection reacted to Jesus’ appearances in a variety of different ways. We cannot turn back the clock and revisit the moments that Jesus appeared to the disciples, the women and many others.

While the debate about whether or not Jesus physically rose from the dead continues, the questions about the resurrection remain: What does it all mean? What will happen to us? Will we be resurrected as he was? What difference does the resurrection make in our own lives and in our world today?

I confess to hour that I may be accused of being a heretic. It doesn’t matter to me if the appearances of Jesus following his crucifixion and death were in the form of a bodily resurrection despite what Updike pointed out and what others say. Unlike Thomas who insisted that he would not believe unless he saw the nail marks in Jesus’ hands and put his finger where the nails were and put his hand in his side, what is more important to me is Jesus’ admonition first to Thomas and then to us: “Because you have seen me [Thomas], you have believed; blessed are those who have not seen and yet have believed” (John 20:29).

I believe in the resurrection of Jesus Christ. Despite the accounts recorded by Luke as well as by Matthew, Mark and John about what occurred as Jesus appeared to the disciples, the women and many others, I would rather spend my time wondering what the resurrection means to us in our day and time.

I would prefer that we spend our time opening our minds “to understand the Scriptures and to proclaim repentance and forgiveness of sins . . . in his name to all nations” (Ibid., page 424). We live in a perilous world, “a world of war, poverty, disease, neglect, prejudice, fear, isolation, and sinfulness” (Ibid., page 429).

I shared with Joclyn as we were about to leave the hotel yesterday morning for the second day of our meetings that I was troubled by the debate over the bodily resurrection of Jesus in the early church and in the church today. I knew that Luke as well as Mark, John and Matthew were concerned that there were some who wanted to deny that the resurrection occurred.

I wondered why it was necessary for them to insist that there was a bodily resurrection and if that was so, what would that mean for us today? I would like to think I would inherit the body I had when I was 36 years old and 50 pounds lighter.

It was then that our conversation turned to obake and kepalō. It is said that there is no direct equivalent in English for the Japanese word obake. Growing up in Hawai‘i, we understood the word obake to simply mean “ghost” but obake are not the spirits of those who have died. In Japanese folklore the obake referred to a state of transformation or shapeshifting.

The Hawaiian word kepalō referred to something devilish, something sinister from the spirit world. But like the word obake, we simply understood kepalō to also mean ghost.

Joclyn remarked, “You know Jesus probably knew that the disciples, the women and the others who saw him after the resurrection would be afraid if it turned out that he was a kepalō or obake – a ghost. So he did some things to reassure them so that they would believe it was him.”

It occurred to me that what Joclyn said made sense. It was only after he reassured them that he was not a ghost or a shapeshifter or a devilish apparition that they were able comprehend what he said. “ ... he opened their minds to understand the scriptures, and he said to them ‘Thus it is written, that the Messiah is to suffer and to rise from the dead on the third day, and that repentance and forgiveness is to be proclaimed in his name to all nations, beginning from Jerusalem. You are witnesses of these things” (Luke 24:45-48).

We are blessed for though we have not seen what Thomas and the others saw, we believe in the promise and power of the resurrection that out of death, new life will emerge. Amen.