“Believing & Following: That We May Have Life”

Over the last several years it happened on two occasions after I moved from Kīhei to Wailuku. The second time it occurred, it was late in the day as Kiko - my dog - and I were walking across the field at Wells Park not far from our home. 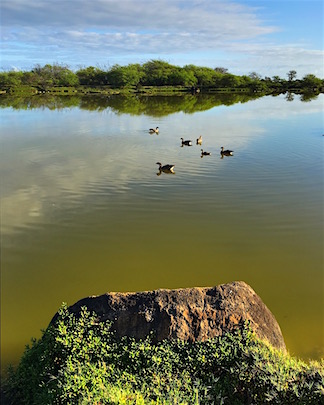 It was the familiar honk of nēnē – or Hawaiian geese - flying overhead. We heard them before we saw them. But I knew the sound of their honking. I looked up as Kiko turned her own head skyward and we saw five nēnē flying slightly above each other in a v-shaped formation to conserve their energy.

It was a glorious sight reminding me once again about what makes Hawaiʻi such a special place for those of us who call this place our home. Yesterday, Kiko and I went out for an early morning walk in a neighborhood near to our home. As we made our way from one street to the next, we could hear the sound of pigeons cooing in the distance and finches chirping above us in trees and rosters welcoming the morning sun.

We could also hear dogs barking as we walked by fenced-in yards imagining that one was a German shepherd, another a pit bull, another a terrier. Every now and then a human voice could be heard imploring a dog to quiet down.

Having grown up in the countryside, it makes sense that Jesus would respond to those in the city of Jerusalem who wondered if he was the Messiah (John 10: 24) by answering: “My sheep hear my voice.” Whether geese or pigeons, finches or dogs, chickens or sheep, we hear their voices and they hear our voices. Perhaps in another time and another place, Jesus would have responded differently – choosing instead the wildebeests of Namibia, Botswana and South Africa or snow monkeys of Japan.

But in our reading from The Gospel According to John, Jesus alludes to himself as a shepherd. “Those who follow him belong to the flock. They hear his voice and obey him. He guides them to pastures where they are nourished; they find protection from whatever could harm them. Nothing can separate those who believe in Jesus from the love of God in whose name he tends to the flock of faith.” (When We Gather, Year C, A Book of Prayers for Worship, James G. Kirk, The Geneva Press, Philadelphia, Pennsylvania, 1985, page 72)

Luke reminds us in our reading from The Acts of the Apostles that the story of the miracle of Tabitha’s healing - of Peter raising her from the dead - caused many in Joppa to believe “in the Lord.” (Acts 9:42) But rather than focus on the miraculous aspect of her healing, we might want to look instead to the miracle of a healing community – that is a community that cared deeply for Tabitha and her well being.

The death of Tabitha was a profound loss for many in Joppa. There was great weeping. Many of the women who were widows shared tunics and other clothing that she had made while she was with them. They knew her well and of how she cared for others.

The loss they felt is a loss we have experienced in our own lives, in our own families, in our own churches, in our own communities. I agree with those who point out that the emphasis on the healing of Tabitha is not upon Peter, but upon those who went to Peter and implored him, “Please, please come to us without delay.” (Acts 9:38)

Within the larger context of other healings we come to realize that the “God who created the world and raised Jesus from the dead is still active in the world, bringing healing to the diseased, hope to those in despair, and life where death seems to reign.” (Feasting on the Word, Year C, Volume 2, Bartlett & Taylor, Westminster/John Knox Press, Louisville, Kentucky, page 426) The story of Easter did not end with Jesus’ death. It began with his resurrection.

The miracle occurs and Tabitha lives and yet we know her life in this world will come to an end with the passing of the seasons. “Peter will not return time and again to revive her. Even Peter will not live forever.” (Op.cit., page 431) Tabitha will not live forever. But for now she lives because of Peter and because she lives we come to understand through her life of service that the “mission (of the church) often takes the form of responding to the needs of others.” (Preaching Through the Christian Year C, Craddock, Hayes, Holladay & Tucker, Trinity Press International, Harrisburg, Pennsylvania, 1994, page 244)

That is the greater miracle. If we believe that Jesus is the Messiah then we too will live a life of service and in believing and in following we will have life in his name.

“Whom are we willing to hold on to, as we are in the hands of Christ? Whom are we to hold?” (Feasting on the Word, Year C, Volume 2, Bartlett & Taylor, Westminster/John Knox Press, Louisville, Kentucky, page 448)

Let us pray: Grant that we may hear your voice, O God, speaking our names and claiming us as your own. Open our ears to hear the law and the prophets, and the good news of their fulfillment in Christ Jesus.

Prepare us to be devoted as Tabitha was devoted to a life of good works and acts of charity. As we continue to gather in the light of this Easter season, may we go forth from this place as your messengers of grace and mercy; may we reach out to others with your hope and peace; may we praise you in the depth of our being so that even the silent moments of our lives, we will speak of your love.