It seemed back then that the telephone in our home was meant for adults. As the years go by, many of my own childhood memories begin to dim. Sometimes I am unsure if what I remember is factual or imagined. 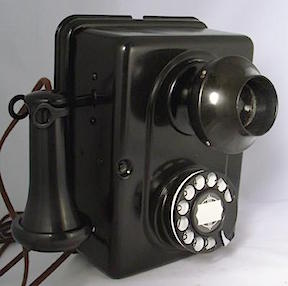 In any case somewhere in my childhood years we did get a telephone. In my mind or in my imagination, I remember a telephone that was rectangular in shape and hung on the wall of our kitchen. It was black in color – they were all black in color - with a hearing piece tethered by a cord on the left side of the device and a mouth piece on the front of what we called the telephone box into which we spoke.

I was told we were on a party-line with several of our neighbors. What that meant was we would have to wait for a neighbor to complete his or her call before we could make our own.

I was on a conference call late last week with someone in Honolulu and someone in Hilo – all of us on our smart phones. I picked up smart iPhone 5 not too long ago. Not long afterwards Apple upgraded the device to an iPhone 6. It has been a challenge for me to keep up with the constant change in technology.

My smart phone provides me with a camera to take photographs and to record videos. You may be wondering what telephones and smart phones have to do with this Easter season. I wondered as I turned to our reading for this morning from The Gospel According to Luke what it would have been like if Mary or Peter or Thomas had a smart phone when Jesus appeared to them after his burial.

How would the image of Jesus appear on the screen of a smart phone? Would we be able to see the mark of the nails in his hands and feet? Would he simply appear as a wisp of light, an apparition?

Luke records the reaction of the disciples when Jesus stood among them and said, “Peace be with you.” In our reading, Luke tells us that the disciples were “startled and terrified, and thought they were seeing a ghost.” (Luke 24:37)

It occurred to me that having a smart phone and recording the appearance of Jesus would have been a sure and certain way for the disciples to prove that the resurrection occurred. We would have an opportunity then to see his hands and feet and to watch as he sat and ate some broiled fish. 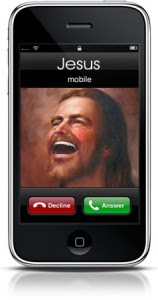 However, neither Luke nor the disciples had smart phones. They did not have video or camera equipment. But what they did have was the ability to either write down their experiences of seeing Jesus, of touching him and of eating with him or of bearing witness to what had occurred by telling their stories to others.

Down through the centuries many Christians, especially Christian theologians, have found themselves embroiled in debates about whether or not the resurrection occurred and if it did what was the nature of that resurrection. Some insisted that Jesus only seemed to be human. Others argued that the resurrection was about the immortality of the spirit.

But the more immediate reaction of the disciples’ encounter with the Risen Christ is what provides us with a clearer sense of the significance of the resurrection. We are told that the disciples were startled and terrified; that they were filled with fears and doubts. It is very likely that if any of us were among the early disciples, we too would have been startled and terrified and filled with fears and doubts.

Some looked upon the stories that were being told as idle tales. There were questions and more questions. “What does this mean? Do we continue where we left off? Do we start over? Will Jesus now go to God and leave us here alone? What will happen to us? Will anybody believe this? Will we be resurrected as Jesus was?” (Preaching Through the Christian Year B, Craddock, Hayes, Holladay & Tucker, Trinity Press International, Harrisburg, Pennsylvania, 1993, page 248)

He goes on to remind the disciples and to remind us, “Thus it is written, that the Messiah is to suffer and to rise from the dead on the third day, and that repentance and forgiveness of sins is to be proclaimed in his name to all the nations, beginning from Jerusalem” (Luke 24:47).

Each of us is called to make that proclamation and to live according to the love and hope of Easter that is in us. As we look about the world and our own lives, vengeance not forgiveness seems to rule the day. It seems that we find fault in others convinced that they are the ones who need to repent.

If the Easter story of repentance and forgiveness is to have any effect in our lives it will be in recognizing that the presence of the Risen Christ is among us, empowering us here and now, to live our lives as people of the resurrection. Like a mother reassuring a child and like a father calming a child’s fears, so it is that that God seeks to reassure and to calm us. Through all our doubts and fears, the Risen Christ is among us offering us words of peace and calling us to do the same.

We met in Kaneʻohe and on Friday afternoon, four of us travelled to Hawaiʻi Kai to see Kahu Genie Keanu. Genie suffered a stroke several years ago and had just moved into an assisted-living facility.

I was with Boyd and Sharon Matsuyama from Pukaʻana Congregational Church in Kealia, South Kona and Frank Mulec from ‘Opihikao Church located on the east side of the island of Hawaiʻi when we met Genie. We talked and laughed, laughed and talked.

At the close of our time together Boyd, Sharon and Frank decided that I should be the one to offer a prayer. I shared with everyone but especially with Genie that among the lessons learned from our Gospel reading this week was the awareness that Christ was amongst us and that he would be amongst each of our lives.

“Peace be with you.”