“Dance Wherever You May Be”

“How come no can hula in church?”

“It has always been that way from the time I grew up in the church. Church is church. If you like hula outside the church okay when get lūʻau, but not inside?

“But how come?” I asked again. “How come no can dance inside?”

“Because her tūtū said ʻNo can,’” she replied. 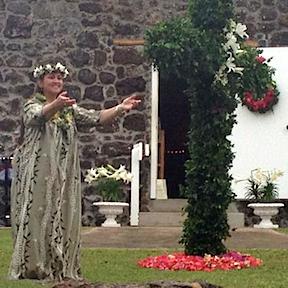 She smiled because she knew I knew that the Christian missionaries who had arrived in 1820 from Boston were quick to call for the suppression of the hula convinced that it was a “lewd and lascivious” activity. Even after King David Kalākaua commemorated his 50th birthday with a two-week celebration of Hawaiian culture at ʻIolani Palace in 1886 with hoʻopaʻa (chanters) and ʻolapa (dancers), hula was frowned upon by many.

But Kalākaua remained resolute in his desire to perpetuate Hawaiian culture and language, especially hula. In 1963 the Merrie Monarch Festival was born in Hilo on the island of Hawaiʻi to honor him. Today marks the start of a week-long celebration of the festival that will include music, crafts, art and hula.

By the end of the week oli, mele and hula will take center stage reminding us that it was through the chant, now song and dance that our Hawaiian ancestors recorded their genealogy, mythology, history and religion. Far from being “lewd and lascivious” hula was one of the ways through which Hawaiian culture was expressed and passed down through the generations.

When I asked one of our kupuna the question, “How come no can hula in church?” the year was 1993. Over a century had gone by since Kalākaua’s “Silver Jubilee” was celebrated.

I wondered how many more years would go by before hula would finally become a part of our life as a church family. We had gotten to the point where we agreed that hula in church would be permissible as long as it was not danced on the altar area.

The change came in an almost quiet and unassuming moment. It happened one Sunday morning during our time with the children. There were so many children that morning. They were seated on the floor and on the steps leading up to the altar. There was no room to move.

Those who were about to hula were crowded up on the altar area. I looked at the dancers, they looked at me. I shrugged my shoulders, they shrugged theirs as if to say, “Why not?” and then they started to dance. Ever since that day hula has become a part of our life as a church family.

In 1963, the same year as the birth of the Merrie Monarch hula Festival, Sydney Carter, an English songwriter, wrote the words to the anthem our choir sang a moment ago, “Lord of the Dance.” Carter borrowed the tune from the American Shaker song “Simple Gifts.”

The hymn follows the idea of a traditional English carol, “Tomorrow Shall Be My Dancing Day” which tells the gospel story in the first person voice of Jesus portraying his life and mission as a dance. Carter wondered if Jesus ever leaped to the rhythm of a pipe or drum.

It is not impossible, he writes, to believe that Jesus danced. The fact that many Christians have always regarded dancing as a bit ungodly, Carter writes, does not mean that Jesus did nor did others who knew him.

I imagine when Mary Magdalene and Mary went to the tomb where Jesus was buried only to be told by an angel, “Do not be afraid; I know that you are looking for Jesus who was crucified. He is not here; for he has been raised, as he said” (Matthew 28:5-6) - I imagine that their joy quickly turned to dancing.

The Bible says “they left the tomb quickly with fear and great joy, and ran to tell his disciples.” (Matthew 28:8) Their fear was not one of dread but one of awe. They understood something happened that first Easter morning that would change the world.

How does one run with great joy? A skip here, a jump there. A smile, a laugh. A twist from one side to the other. It sounds like dancing to me.

From images of Miriam (Exodus 15:20-21) leading the women with dancing across the Red Sea to David (2 Samuel 6:12-19) dancing before the Ark of God to the numerous references throughout the Psalms (30:11, 149:3, 150:4), dance was an expression of awe, worship and joy -something that Mary Magdalene, Mary and the disciples knew. They danced and so we dance – wherever we may be – for the One who is the Lord of the Dance. Moses Keale was a powerful Christian leader from the island of Niʻihau. He was born in Kalalau on the island of Kauaʻi around 1828.

One day, as he was hunting, he followed a white goat up a cliff and became stranded on a ledge. A falling rock hit him, causing him to lose his balance and tumble into the river called Makani Kahoa. As he plummeted down the cliff, it is said that he called out, “If there really is a God, he (sic) will save me and I shall spend the rest of my life serving him.”

His fall was broken by a lauhala tree and he was pulled from the river by his dog. Shortly after that Keale started a church in Waimea and then was led to Niʻihau where he became greatly loved and respected as a kahu, a pastor and for his gift of prophecy. He wrote many prayers and hymns for the church that are still used today including “Ua Mau - Hosana.” 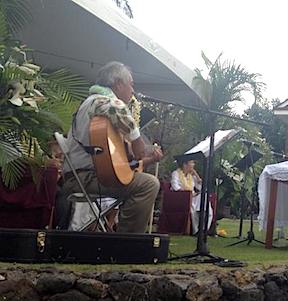 There are ten verses to the hymn. In a moment Uncle George Kahumoku of Kahakuloa will sing and Keʻala Pasco of Kīhei will come to dance two of those verses and the chorus.

“Perpetual is the righteousness that comes from God above. Let us gather together in God’s goodness and grace. Praised be God in the high heavens, laying down for our lives. We gather together, parents and children as one in mind and one in heart.”