Uncle Angus stopped by the other day.

As I arrived at work on Thursday morning I noticed a small yellow school bus with the blue and white sticker for the Kamehameha Schools – Maui Campus its the side window. At first I did not see him but as I walked towards the sidewalk entrance, Uncle Angus came forward and greeted me.

“I came by to visit Mama,” he said as he turned and nodded his head in the direction of her gravesite.

I met Auntie Helen Kuamoʻo Peters – Uncle Angus’ mama - twenty-one years ago. At that time she was the most senior member of our congregation. Her health had declined to the point where she was no longer able to walk or attend services here at the church. 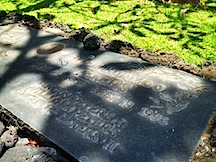 Uncle Angus reminded me about Auntie Helen. We “talked story” for few minutes. It was Auntie Helen along with Auntie Caroline DeLima and other kūpuna or elders who kept the doors of this church open throughout their lifetimes and for that I am grateful.

All of them are gone now.

It is not difficult to see Auntie Helen in Uncle Angus. During our visit Uncle reminisced about his childhood days here at church with his mama. He remembered hymns that he sang in Sunday School. As he spoke he began singing - “I ka hele o Iesū . . . ”

He retired not long ago having served in local government for many years. Now in his retirement he spends his days telling the keiki or children in his care about the lessons he’s learned in his own life.

He talked about his visit with family and friends whenever someone was in the hospital. “They ask me to come and pray for them,” he said. “So, I go and I always tell them we pray for God to comfort you.”

I appreciated Uncle’s humility and understood how important it is for us to distinguish between “praying for a cure, which seems to dictate to God our desired outcome, and praying for healing, which can come in a hundred unexpected ways.” (Feasting on the Word, Year C, Volume 2, Bartlett & Taylor, Westminster/John Knox Press, Louisville, Kentucky, 2009, page 429.) Our reading from The Book of Acts is about a woman named Tabitha whom Peter raises from the dead. It is a story about healing, not about curing.

We know that Tabitha will not live an earthly life forever. One day she will die and Peter will not return to again raise her from the dead. Even he will die.

The significance of the story of Tabitha is not about returning from death. Instead it is about the ways in which a community utilizes its spiritual strength and resources with great passion upon life and wholeness. (Op. cit.)

It seems that the writer of the text wants us to know that “the God who created the world and raised Jesus from the dead is still active in the world, bringing healing to the diseased, hope to those in despair, and life where death seems to reign.” (Ibid., page 426) In light of the horrific bombings that occurred at the Boston Marathon last Monday that claimed three lives and injured more than 170 others (“Students from Maui relate ‘scary’ moments as events unfold,” The Maui News, Saturday, April 20, 2013, A-1), we understand that “God is still working through God’s Spirit in the lives of people and in human society to restore this broken world.” (Ibid., page 428)

Some may feel we live in a world where healing, hope and life are in short supply. That may be true in many parts of the world this morning. It is not true in Boston. In an interview with employees at the restaurant where the second bomb was detonated, it was reported that all of the employees stayed to lend a hand and more to those who were injured.

When asked “Do you consider yourselves heroes?” one of the men answered: “We were in the wrong place at the wrong time, but we did the right thing.”

Joseph Harvard, a Presbyterian minister, contends that the story of Tabitha being raised from the dead “challenges our assumption that we are left to our own devices to fix our predicaments” and that some of “our predicaments are not fixable at all.” (Op. cit.) Some call it the Humpty Dumpty syndrome – that whatever is broken is impossible to put back together again.

But the story of Tabitha tells us otherwise. Tabitha was a disciple of Jesus. She was a widow and as such she lived on the margins of society. It is certain she understood what it meant to live in a broken world. Yet, despite her status as a widow, we are told that she was devoted to do good works and acts of charity. She served others.

Upon her death two men are sent to Peter with the request that he come to them without delay. We are told that upon his arrival, Peter was taken to the room where she lay. All of the widows with whom Tabitha had served stood beside Jesus weeping for her. They showed him the clothing she had made for them.

In response to so many who gathered that day, Peter prayed for her and then helped her up. While it is true that we attribute the healing to Peter, it is also true that the community of “resurrection hope had reason to believe in a God who transcends ... birth, life, and death.” (Ibid., page 429)

As we continue through this season of Easter we are mindful of the life-giving acts of those who bring healing, hope and life to others. We call them “first responders.”

Jesus said, “The works that I do in my Father’s name testify to me. My sheep hear my voice. I know them and they follow me.” So it was that Tabitha and Peter followed.

So it is that you and I, as disciples of Jesus Christ, must also follow.

Yes, some may believe that life-giving acts or works are in short supply. Not so in Boston and as we discovered a few days after the bombings not so in West, Texas.

Many of you saw the photograph of Martin holding a sign at his school which read: “No more hurting people. Peace.” 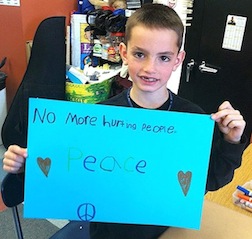