"That We May Love"

Before Kiko came into my life, I adopted one of her male puppies from a friend. The puppy was brought to my home in Wailuku when he was a little over eight weeks old. 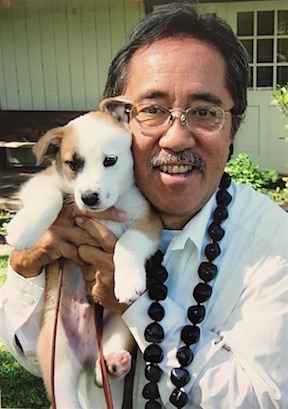 I named him Hanu after coming across a passage in The Book of Ecclesiastes which reads: “I said in my heart with regard to human beings that God is testing them to show that they are but animals. For the fate of humans and the fate of animals is the same; as one dies, so dies the other. They all have the same breath, and humans have no advantage over the animals; for all is vanity. All to go one place; all are from dust, and all turn to dust again. Who knows whether the human spirit goes upward and the spirit of animals goes downward to the earth?” (Ecclesiastes 3:19-21)

The Hawaiian language Bible translates a portion of verse 19 in this way: “ ... ho‘okahi hanu iā lākou – they share one breath.” So I named the very first dog that came into my life – Hanu – which for me meant – “We share the same breath” or “We share one breath.”

Many of you know Hanu came into my life nine years ago. We were together for three years. He died in 2012 from seizures. I was profoundly affected by his death but have come to value and appreciate the memories of those years that were filled with aloha, with love.

About three months after Hanu died, I adopted Kiko, his mom, and we have been together ever since. Kiko means “Spot.” It made sense to keep her name since the spot on the top of her head is a permanent marking.

Like his mom Kiko, Hanu was a poi dog. He was a mixed breed.

Whenever anyone would ask what his mix was I would answer, “Border Collie, Catahoula and American Staffordshire Terrier.”

In many ways, I saw all of that in Hanu and I see all of that in Kiko. The American Staffordshire Terrier was bred to be a fighter. While they are muscular in appearance and can easily give people pause in approaching them, they are courageous, obedient, and intelligent. They are people-oriented and they thrive when they are made a part of a family.

The Catahoula is known as a hunting dog, and was named after Catahoula Parish, Louisiana where they were first bred primarily for hunting pigs. They are energetic, independent, gentle, inquisitive, and intelligent. The herding instinct is in the Catahoula. I saw that in Hanu and I see that in Kiko.

Like the Catahoula, the Border Collie is a dog developed for herding life stock, especially sheep. Border Collies were bred for their intelligence and obedience.

Hanu and I took a drive to Upcountry Maui one afternoon. On the drive down from Haleakalā we went by a pasture filled with sheep. I noticed how he instinctively rose up a bit higher than usual on all fours and turned his attention to sheep grazing in the field along the roadside. His eyes were transfixed on the sheep.

I suppose it was not a good idea that I had the back windows rolled down. He could see them clearly and perhaps more significantly he could smell them.

I felt bad about not being able to pull over to the side of road, stop and let him out to have a run across the field. As much as I knew he would instinctively “herd” them, I was not the shepherd of the field and so it was not my place to turn him loose.

I kept apologizing to him. “You know, they’re not my sheep, Hanu. I’m sorry, but we can’t stop.”

Our reading from The Gospel According to John is the third of four subunits in chapter 10:1-21 filled with images of sheep and shepherds. The first, verses 1-6, is filled with images of the shepherd as well as thieves and robbers and a door. The second, verses 7-10, seems to be a commentary on verses 1-6. The fourth, verses 19-21, is a summary of the mixed responses to Jesus’ speech (Preaching through the Christian Year B, Craddock, Hayes, Holloday & Tucker, Trinity Press International, Harrisburg, Pennsylvania, 1993, page 254).

But in verses 11-18, Jesus is presented as the model shepherd who gives his life as the ultimate act of caring. This act of love stands out . . . against the dark backdrop of hired workers who, at the slightest threat of danger, abandon the sheep (Op. cit.).

In the early church, this model of Jesus as shepherd was held up before pastors, urging them to care for the “flock,” for the “people” in spite of the dangers (Acts 20:28-30) or violent persecutions (1 Peter 5:1-2). Those in the early church for whom the writer of The Gospel According to John was deeply concerned were facing social and religious ostracism and even death at the hands of those claiming to be God’s servants (John 15:18-25; 16:1-4).

For those reasons, they were encouraged by the image of Jesus as the Good Shepherd, as one who was willing to lay down his life for the “people” in the same way a good shepherd would do anything to save his sheep. In our other reading from The First Letter of John, the writer reminds us at the outset: “We know love by this, that [Jesus] laid down his life for us – and we ought to lay down our lives for one another” (1 John 3:16).

The writer then raises a question that we cannot ignore: “How does God’s love abide in anyone who has the world’s goods and sees a brother or sister in need and yet refuses to help?” (1 John 3:17). If we are God’s people and the sheep of God’s pasture, then our love for God, ourselves and others must not only be in word or speech but in truth and action.

Sadly though that truth is more easily said than done. Police arrested a man on Friday for allegedly demanding money from flood victims on the island of Kaua‘i after picking them up on his boat. He was arrested for extortion, robbery and terroristic threatening.

Apparently he was not the only one demanding money following the catastrophic rains that fell on Wainiha, Haena and Hanalei. Other residents and visitors who were trapped in Haena after the access road was washed away during a flash flood said others representing themselves as rescuers also demanded money for their help.

How does God’s love abide in anyone who has a boat and sees a brother or sister in need, offers to help and then declares 200 yards offshore from their destination, “Oh, by the way you owe me $200!” There is no aloha, no love in that action.

As the Good Shepherd, we see how Jesus came to care for those who took heed of his voice. He embraced the outcasts of his day – “sinners, lepers, women, Samaritans, tax collectors and more” (Feasting on the Word, Year B, Volume 1, Bartlett & Brown, Westminster/John Knox Press, Louisville, Kentucky, 2008, page 451). He was concerned about the welfare of each person and at the same he was concerned about the welfare of all. We ought to share the same concern.

So it is that “sharing the love and showing the way of Jesus Christ” are what we must be about. He laid down his life for us in love that we too may love (Feasting on the Word, Liturgies for Year B, Volume 1, Long, Westminster/John Knox Press, Louisville, Kentucky, 2014, page 164).

Let us pray: May the goodness and mercy of God follow us all the days of our lives, and at our life’s end, may we dwell in your house forever. This we pray in the name of the Good Shepherd let us. Amen.