“That We May Have Life - Eternal” 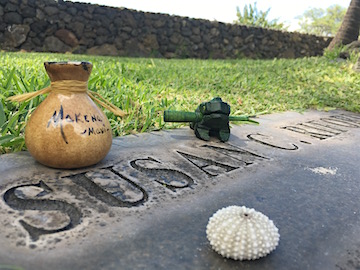 I know there are those among us this morning who have experienced what Gary Jones, an Episcopal priest, says is “a final, intensive conversation with someone we love who knew that he or she would not be with us much longer.” (Feasting on the Word, Year C, Volume 2, Bartlett & Brown, Westminster/John Knox Press, Louisville, Kentucky, 2009, page 468). “It is,” Jones, writes, “a truly sacred time that we are supposed to remember for the rest of our life.” (Op. cit.)

It is not difficult for us to imagine that such a question was on the mind of Jesus as he gathered his disciples for what was to be his final Passover celebration in Jerusalem. Jesus knew that the time had come for Judas to betray him to soldiers, the police and religious leaders.

He knew that his time with the disciples and his life would be coming to an end. “I am with you only a little longer,” he tells them. “Where I am going, you cannot come.” (John 13:33)

After washing their feet and sharing supper with them, Jesus decides “to get right to the point.” (Op. cit.) No more speaking in parables. No more long discourses for the moment.

In what appears to be an acknowledgement of the difficult days that lay ahead for the disciples, Jesus addresses them as “little children” (John 13:33), not to denigrate them but with “an intimacy that conveys the poignancy of this special moment in his life.” (Op. cit.)

Jesus knows that Peter will deny knowing him. He knows that the disciples will flee out of fear and confusion after his arrest, trial and crucifixion. Yet, his love for them does not change. It does not waver.

We may say we understand but others have observed that: “[This] new commandment is simple enough for a toddler to memorize and appreciate, and it is profound enough that the most mature believers are repeatedly embarrassed at how poorly they comprehend it and put it in to practice.” (The Gospel According to John, D.A. Carson, Apollos, Leicester, England, 1991, page 484)

Jesus’ primary concern was about what we believe but about how we live. “I give you a new commandment, that you love one another.” (John 13:35)

By demonstrating our love for one another, Jesus makes clear that everyone will know we are his disciples. He did not say, “Others will know you are my disciples if you believe in the right things” – if you go to church every Sabbath, read your Bible every day and pray, pray, pray. (Ibid, page 472)

But how are we to love one another? Jesus provides no details on the content of that love in our reading from The Gospel According John this morning except to say, “Love one another. Just as I have loved you, you also should love one another.” (John 13:34)

Our inclination is to point to Jesus’ compassion for others. But his love went beyond compassion. Jesus repeats himself several times and then adds, “No one has greater love than this, to lay down one’s life for one’s friends.” (John 15:13)

Taken out of context, it is easy to conclude that the implication is that we ought to lay down our lives for one another. But Jesus was saying that of himself – that he would lay down his life for Peter and the others and for us.

In her book Out of Africa, author Isak Dinesen includes a story of a boy named Kitau. The book is neither memoir, autobiography or novel. It is arranged as a series of anecdotes rather than a chronology of her life.

Among the anecdotes is a story about a boy named Kitau. It is said that “he appeared at the author’s door one day to ask for a job as a domestic servant. She hired him but was surprised when after three months he asked for a letter of recommendation to Sheik Ali Bin Salim, a Muslim who lived in a nearby town.”

“Dinesen offered to raise Kitau’s pay in order to keep him, but money was not his interest. Kitau had decided to become either a Christian or a Muslim, and his purpose in working for Dinesen had been to see close up, the way a Christian lived. Now that he had worked for Dinesen and seen the ways of Christians, he would go and observe Sheik Ali to see how Muslims behave; then he would decide.” It is said Dinesen “remembers how she wished Kitau had told her that before he came to live with her.” (Op. cit.)

I thought about one of the lyrics of a hymn that we sometimes sing as a part of our worship service. “There Is a Balm in Gilead” is “one of the most moving of African-American spirituals because it illustrates the way in which the enslaved tried to encourage those who were feeling especially weighed down by the burden of their captivity.” (The New Century Hymnal, The Pilgrim Press, Cleveland, Ohio, 1995, #553.

As we continue through this season of Easter, we give thanks for the gift of life and of love eternal. At the end of our lives all that will matter is how much we loved and how much we were loved. All we can really take with us in our dying is love and all that we can leave behind that has true value is love. Nothing else matters - not our dogmas or doctrines, not our wealth or possessions, not our fame or achievements – only love.