About a week after the two bombs were detonated near the finish line of the Boston Marathon, churches across the city opened their doors to remember those who were killed and to ease the grief of the living. It was not so with Boston’s historic Trinity Church. 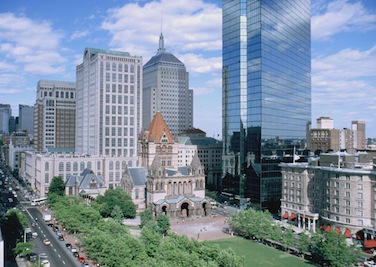 The church could not open its doors nor hold services last Sunday because it was within the area designated as the crime scene. The congregation was invited to worship at the Temple Israel synagogue instead. The Federal Bureau of Investigation allowed church officials a half-hour Saturday to go inside to gather the priests’ robes, wine and bread for Sunday’s service. (“Police think brothers had planned for more attacks,” The Maui News, Monday, April 22, 2013, page A4)

Trinity’s Rev. Samuel T. Lloyd III offered a prayer last Sunday for those who were slain and for those who must rebuild their lives having suffered catastrophic injuries. I suspect the sight of an Episcopal priest celebrating the Lord’s Supper in a synagogue may have been hard for some to imagine.

But I also suspect the sight of an African American Jewish Gospel singer in a Hawaiian Congregational Christian church would be equally hard for some to imagine. But here we are and we see what is possible. We see that a new heaven and a new earth is possible now and not simply at the end of our lives or the end of the ages.

Our reading from The Revelation to John provides us all with strength and hope in desperate times. The promise of a new heaven and a new earth is for all who long for the assurance that there is a place where death and mourning, crying and pain will be no more.

Dana Ferguson, a Presbyterian pastor, writes: “In The Revelation to John ... the new heaven is plainly and simply the place where God is. This is the first and most important detail: heaven is the place where God is and humans are fully united with God.” (Feasting on the Word, Year C, Volume 2, Bartlett & Taylor, Westminster/John Knox Press, Louisville, Kentucky, 2009, page 462)

In trying to make sense of that horrific day in Boston, Rev. Lloyd asked rhetorically, “So where is God when the terrorists do their work? God is there, holding us and sustaining us. God is in the pain the victims are suffering, and the healing that will go on. God is with us as we try still to build a just world, a world where there will not be terrorists doing their terrible damage.”

Imagine such a world—where heaven and earth are one—a place where love abides and abounds. Such a world was difficult if not impossible for the early disciples of Jesus to imagine. In our reading from The Gospel According to John, we learn that Judas had gone out and left the other disciples with Jesus.

Jesus is aware that they are not going to understand the implications of Judas’ departure. Very shortly they will quarrel among themselves and eventually run away fearful for their own lives as Jesus is arrested, put on trial and executed. This is Jesus’ last opportunity to say what he wants to say.

Rather than address them as men, he addresses them as children as if to underscore their inability to comprehend what is about to happen. But he also seeks to convey his deep love for all of them, concerned that they will be overwhelmed by the events that are to come.

This is Jesus’ last opportunity to say what he wants to say. He does not tell a parable nor does he confront them with questions. There are no distractions or diversions. He gets right to the point – “love one another.” That’s it. All pau!

Someone said that such a command is simple enough for a young child to memorize and appreciate and profound enough that as adults most of us are embarrassed at how poorly we comprehend it and put it into practice. (Op. cit., page 470) We are to love one another and in doing so others will know that we are disciples of Jesus Christ.

I still find comfort in those words. But as I’ve grown older, I have come to realize that Christians are not the only ones who are called to love. Others are called to love – some who share in what we believe as well as others who believe differently. While as Christians we may value our doctrines, practices and rituals it is very, very clear that Jesus did not say, “They will know we are Christians if we believe the right things.” (Op. cit., page 472)

Ferguson reminds us: “The words that we hear today in Revelation have the power to become such life-altering words for . . . those who find themselves in the midst of struggle and turmoil. ‘It is done. I am the Alpha and the Omega, the beginning and the end.’” (Revelation 21:6)

“All that has hindered, hurt, and hampered us will be gone. What will be left is a life with God, filled with relationships of joy and strength...” (Op.cit. 466) We imagine such a new heaven and a new earth – a place where love abides and abounds.”

The vision of such a place was shared by the prophet Isaiah centuries earlier. “Thus says the Lord: ʻFor I am about to create new heavens and a new earth; the former things shall not be remembered or come to mind. But be glad and rejoice forever in what I am creating.'”