"What did the women say?"
The Rev. Kealahou C. Alika

Throughout the month of April our readings from the Bible have focused Jesus’ final entry into Jerusalem during the Feast of the Passover. His journey was our journey.

Along the way we experienced moments of joy as well as sorrow – sorrow that turned into grief – and then into joy. How was it that we were so deeply affected by his death?

In our reading from The Gospel According to Luke, Cleopas and his companion find themselves overwhelmed by Jesus’ trial, crucifixion and death. Jeffrey M. Gallagher, the senior pastor of the United Congregational Church of Tolland in Connecticut, concludes that they were lost and defeated. “They poured their whole lives and selves into following this man they knew was the savior. They gave up everything to follow him. Then he died – defeat was snatched from the jaws of victory. The one who was supposed to deliver them all couldn’t even deliver himself from the cross.” (Christian Century, April 12, 2017, page 20)

But who was this Jesus? What did Jesus have to say of himself? In a reading from The Gospel According to John, Jesus said, “I am the resurrection and the life. Those who believe in me, even though they die, will live, and everyone who believes in me will never die.” (John 11:24-26a)

What did the people say? As he entered Jerusalem the people spread their cloaks on the road and others cut branches from trees and spread them on the road. They began shouting, “Hosanna to the Son of David!” (Matthew 11:9)

What did those who were in the crowd that day say? They said, “This is the prophet Jesus from Nazareth of Galilee.” They regarded Jesus as a person who was not simply an inspired teacher but one who came to proclaim of the will of God.

More recently we asked the question, “What did Thomas say?” It was Thomas who said he would not believe that Jesus had been resurrected unless he could see the mark of the nails in his hands.

It was only after he recognized Jesus that he said, “My Lord and my God!” (John 20:28) Inasmuch as there are those would make the same demand as Thomas, Jesus made clear to Thomas that those who have not seen and yet have come to believe are among those who are blessed. (John 20:29)

Before Cleopas and his companion head out for their 7-mile trek from Jerusalem to the village of Emmaus, some of the women in their group reported that they did not find Jesus’ body in the tomb where he was laid to rest. 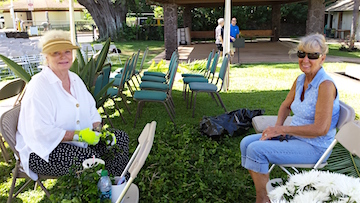 What did the women say? They said they had seen “a vision of angels who said that he was alive.” (Luke 24:23)

How could that be? He was nowhere to be found. Yes, there were the appearances following his death. But just as quickly as he appeared, he disappeared.

Was it all a dream, an illusion, a hallucination? Did they see someone that looked like Jesus? Did they see someone who reminded them of Jesus? Or could it be that despite Luke’s account of what happened to Cleopas and his companion, the extraordinary miracle of the resurrection was not so much Jesus’ appearances to the women, the disciples or even to them but in something more ordinary.

Their almost comedic encounter with Jesus makes this evident. As they walk along talking to each other, Jesus joins them and asks, “What you are talking about?” Looking sad, Cleopas responds, “You’re kidding right? Are you the only one in Jerusalem who does not know what has taken place these days?”

Jesus asks him, “What things?”

He shares what it was like to lose hope. For them, the empty tomb meant nothing.

As they drew near to the village of Emmaus, Jesus walked ahead of them as though he was going on. They invite him to stay with them and Jesus accepts their invitation.

He sits down with them for a meal. It was then that “he took break, blessed and broke and gave it to them.” (Luke 24:30) It was in that moment, in the ordinariness of that moment that they recognized him. For Cleopas and the others, the breaking of the bread, the sharing of a meal was a hō‘ailona, a sign of his presence.

They did not recognize him when he came near to them on the road to Emmaus or when he walked with them and when he attempted to explain everything to them. Instead they recognized him in something so ordinary - when he took, blessed, broke and gave them bread. (Op. cit.)

Jeffrey Gallagher points out that “it’s only then that the tears give way . . . and they can finally see who has been journeying with them.” (Op. cit.) “Is this not the way God so often enters our lives?” he asks rhetorically, “not in the miraculous, but in ordinary taking, blessing, breaking and giving; in the hug of a friend we haven’t seen in a while; in the laughter of a child ... ”

Through such encounters we recognize God. Over the course of recent months, we have bid aloha to Muriel Winterscheid of Mercer Island, Washington; Phil Christopher of Kula; Uncle Joe Noland of Wailuku; Jim Campbell of Honolulu; Maryreba Kircher of Scottsdale, Arizona and San Diego, California; Marilyn Maddux of Wailuku; and Ualani Makaʻike Calleja of Paukukalo.

Let us pray: Lord, hear our prayer. Your rising from the tomb heralds the dawning of life eternal as the dawning of this day holds the possibilities of life anew. Open our eyes to the signs of your resurrection in the ordinary moments of our lives and confirm in our hearts the power of your amazing love that we may with confidence sing “Alleluia.”