When I told Charlie I wanted the front yard of my home to have an outside area that was landscaped with Hawaiian plants and designed to look like a Japanese garden in deference to my mom and dad – my mom was Hawaiian-Portuguese and my dad was Japanese – he quickly came up with the idea of including a water feature. Charlie suggested a two-tiered pond – the lower pond would be the larger of the two and become a habitat for Japanese koi. 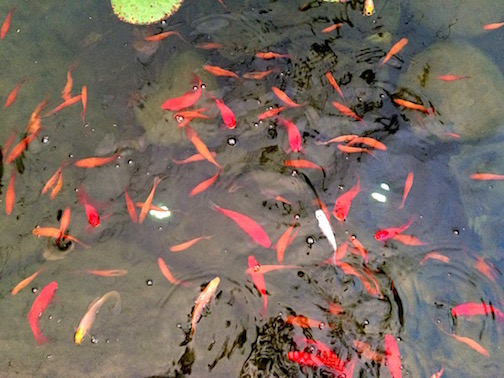 The upper pond would be planted with kalo or taro and serve as a filtration system that would circulate the water from the bottom to the top and cascade back down as a waterfall. In addition to having the taro as part of the landscape, it would also become a source of food. [Ed.: photo above is of Kahu Alika's actual koi pond. ~ L. Nebres]

Taka, a member of our church, grew up in Wainiha on the island of Kauaʻi on a taro farm. As a boy, he worked in the loʻi where the taro was planted. Growing and harvesting taro is something Taka knows well.

I knew that he had taro at his home in Kīhei and so I asked one day if I could get some huli or cuttings from him that would be good for making laulau, not poi. He gave me three cuttings.

I took them home that summer day and planted them in the upper pond. I waited for taro to grow. The months went by. I waited and waited.

Charlie noticed that not much was happening and he wondered if I should get more cuttings from Taka. I decided to wait.

Then it happened. The rains came at the start of the Makahiki season in October and almost overnight, the taro began to flourish.

The stalks grew tall, the leaves grew broader and broader and soon it was time for the first harvest. I cut about two dozen leaves, enough to make twelve chicken laulau. Other harvests would follow.

With all of the rain we have this last Makahiki season and this spring, the taro has continued to flourish. When I mentioned to Taka that it seemed like there was too much growth, he suggested it was time to thin out the taro. So early last week, I began to cut the taro back.

I would be the first to tell you that I know next to nothing about what it takes to be a taro farmer. What I know comes from books and what others have told me. There have been a couple of occasions when I have worked with others clearing a loʻi of weeds and preparing the area for planting. That is about as much as I know about taro farming.

For the taro farmer long ago and today, the work of planting, caring and harvesting taro was and is demanding. Over the course of time, the taro became more than a dietary staple for our Hawaiian kūpuna or ancestors. Its impact on the political, economic and spiritual life of ancient Hawaiʼi grew many say to “mythological proportions.”

Its importance was so significant that taro came to be considered as the elder sibling of the Hawaiian people. The story is told of how a child born to Wākea and Hoʻohokukalani died at childbirth. In Hawaiian cosmology Wākea is Sky Father.

The child was buried and it is said that a taro plant grew in its place and they named the plant Hāloanaka or the “long stalk trembling.” A second son born to Wākea and Hoʻohokukalani was named Hāloa after his elder brother.

From this Hāloa, it is said the Hawaiian people descended. Hāloa was to respect and look after his older brother – the taro plant – for all eternity. In return, the elder Hāloa would always sustain and nourish his younger brother and his descendants.

So it was that the life of a taro farmer to care for the taro and the land came to be. During the harvest, only what was needed was pulled. The roots were worked free from the mud by hand and foot.

On the banks of the loʻi or pond, the leaves were chopped off and the corm or the roots of the taro were cut from the huli and the top part of the corm could then be replanted. From the corm, which represented the makua or parent, grew the offshoot or some say the keiki or children known as the ‘ohā. It would make sense then that out of the story of Hāloa would come the Hawaiian word ‘ohana - for family.

Now as little as I know about being a taro farmer, I know absolutely nothing about being a vinegrower. But what I have come to realize is that in understanding what it means to be a taro farmer, I have come to appreciate more fully the intent of Jesus’ discourse on what it means for our Heavenly Father (sic) to be a vinegrower.

Our Hawaiian ancestors saw and understood that there was an interrelationship between Wakea as Sky Father, Hāloa and themselves. In our reading from The Gospel According to John, we see and understand that our Hebrew and Gentile ancestors saw the interrelationship between God as Father, Jesus and themselves through Jesus’ discourse about the vinegrower, the vine and the branches.

Jesus said, “I am the true vine.” He used an image that was familiar in Hebrew Scriptures. Vineyards were an important and significant part of Israel’s agricultural life. Like the taro farmer, the vinegrower was faced with extensive work in preparing the ground for cultivating vines.

Jesus called himself “the true vine” and then identified those who followed him, then and now, as the branches. There is one vine and many branches that nourish its growth. But the branches are only strong when they are connected to the stem of the vine.

From time to time vines must be pruned. Dead branches are cut away. This allows for the vine to produce better fruit. We know that any kind of pruning does not hurt a healthy plant, but in fact stimulates new growth.

It has been said that there are two messages in our reading that are clear and inescapable. As we continue through this Easter season, the question is raised for the early church and yes, for us today: What does the risen Christ have to say to us about pruning and bearing fruit?

First, there is the relationship of the risen Christ to the church. “That the relationship is possible . . . is a gift of grace and the occasion for gratitude and joy” (Preaching Through the Christian Year B, Craddock, Hayes, Holladay & Tucker, Trinity Press International Press, Harrisburg, Pennsylvania, 1993, page 260).

The second message is that Jesus makes clear that God as the Father, as the makua, as the parent, is the vinegrower (John15:1). The vinegrower comes into the vineyard to cut away and to prune the branches of the vine.

Is it not the case that pruning – that is, the severing of relationships that are debilitating, the loss of things that burden us, and the cessation of pursuits that have no meaning - is often understood by those suffering the pain as being cut away from God? “When we go through difficult times, we may experience this image of pruning as painful” (Op. cit.).

Yet we know that there are aspects of our lives that need to be cut away or redirected. Such cutting and pruning of the branches is done in order for the vine to be more fruitful. So it is with our lives. Our fruitfulness is the way we are able to carry out God’s work in the world.

In his words to the early church and to us, Jesus offers us assurances, warnings, instructions and promises enabling us to welcome all into our midst and to proclaim to others the good news of God’s love to all. In the end, Jesus makes clear that God is the master gardener – whether of taro or of grapes – “and that those who abide in love abide in God, and God abides in them.” (1 John 4:16)