“In the Breaking of the Bread”


My poi dog Kiko was on the shoreline when we launched the canoe from Mākena Landing the other weekend. We were on our way out to release ashes at the south end of Maluaka Beach for someone who died in early March.

It was early morning. The sun was already above the summit of Haleakala. The ocean was a bright turquoise and deep blue.

We were about a hundred yards offshore when Daniel turned to me and said, “I think your dog is following us.”

Daniel was straddled over the ‘iako or the outrigger boom of the canoe. All he had to do was look to his right to get a clear view to the back side of the canoe.

I twisted my torso a bit and saw Kiko’s head bobbing in the ocean and her front paws breaking the surface of the water. She seemed determined to get to us and as I looked back I panicked thinking, “Great, she’s about to become shark bait.”

Although I did not say anything to anyone at the time I could feel myself being gripped by fear. Daniel quickly volunteered, “We need to turn around and get her.”

“That’s it!” I said. “We need to go and get her.” Once the decision was made my feeling of fear turned to anger. I was prepared to berate Kiko for such a fool-hearted adventure.

Phil steered the canoe into a broad turn. Just as we completed the full turn Daniel said, “It looks like she wore herself out. She’s turned around and is heading back to the shore.”

The feeling of fear and anger dissipated and I found myself puzzled.

“Why would she do such a thing?” I blurted out.

“Because she wants to be with you,” said Daniel. 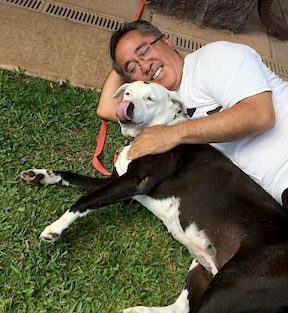 In the span of a few minutes I went from feeling great fear to feeling great love – for and from a dog no less. That love was always there but because I was overcome by fear, it was hard for me to see what was right in front of me.

The inability to see what is right in front of us is what marks the encounter Cleopas and an unnamed companion experienced when Jesus came near to them and walked with them on the road from Jerusalem to Emmaus. Surely there was time enough on the seven-mile journey for them to come to realization that it was Jesus. We are never told why they did not recognize him.

We can only imagine the source of their blindness and in our imagination we may discover that in many, many ways we are like Cleopas and his companion. “Who among us has not felt blindsided in times of distress and wondered if God can see what is around the bend?” (Feasting on the Word, Year A, Volume 2, Bartlett & Taylor, Westminster/John Knox Press, Louisville, Kentucky, 2010, Page 420) Were they both so blinded by their sorrow and grief, confusion and sadness, fear and anger over Jesus’ death that they could not see the risen Christ right in front of them?

Even as Jesus reminds them of the promises of the resurrection found in the scriptures, they still do not recognize him. They look, but they do not see.

Remarkably, it is only when Jesus sits with Cleopas and his companion at their table, takes bread, and blesses and breaks it, it is only then that their eyes are opened. They recognize what he is doing. They see the pattern of his movements that are familiar to them. They see Jesus. (“Living by the Word,” Yvette Schock, Christian Century, April 30, 2014, page 20)

In a way, we cannot fault Cleopas and his companion, Mary and Mary Magdalene, or Thomas and the other disciples for not recognizing Jesus in the days following the burial and resurrection. Their fears and our fears become the source of our blindness in the world.

Last Tuesday a 19-year-old man shot himself to death after he opened fire at a FedEx package-sorting center just outside of Atlanta. At least 8 workers were wounded.

There are those who will argue that had the new Georgia gun law been in place, the shooter would have been stopped from his rampage. The new law dubbed “guns everywhere” goes into effect July 1st.

On that day those who are licensed to carry a gun in Georgia will be able to do so in businesses as well as in churches. Ironically one of the few places where one will not be able to carry a gun is in the state government building where politicians as lawmakers meet.

There are those who believe that “a well-armed family is a safe family. A well-armed America is a safer America.” For over a year we have prayed for wisdom and courage for our political leaders and those in the leadership of the National Rifle Association to seek ways to curb gun violence in the places where we live, work, play, study, and worship. It appears that our prayers have been to no avail.

It troubles me to think that the only thing we can do to assure peace and security for ourselves, our families and our communities is to buy a gun to protect ourselves from our fear of others. Centuries ago the road to Jerusalem ended with the horror of the crucifixion. If anyone had reason to be concerned about their own peace and security that, it would have been Cleopas and his companion.

In their grief and fear, Jesus finds them. He walks with them and takes a place at their table and in breaking bread with them, Jesus opens their eyes to his presence. All that keeps them from recognizing him are stripped away – the disappointment, the loss, the isolation, the fear. (Op. cit.)

Cleopas and his companion return to Jerusalem. There they find the disciples and their companions. The disciples tell them that Jesus has risen and that he has appeared to Simon.

It is then that they tell the disciples what had happened on the road to Emmaus and of how Jesus had been made known to them in the breaking of the bread. No guns. No swords. No weapons, only bread shared.

The choice is before us and it is clear – more guns or more bread.