Takahiro and Junko stopped by the church last Thursday for a visit. They were married here a year ago on Saturday, May 5, 2012. Their English was far better than my Japanese and between our gestures and smiles we were able to communicate well enough with each other. 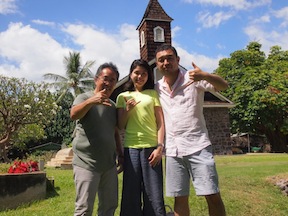 They came bearing an omiagi or gift. Takahiro referred to them as “Japanese cakes” – two bread-like pastries individually sealed in clear plastic pouches. I also offered them an omiagi – a ceramic tile of the church - and they were pleased. [Click photo to go to Keawala'i's Facebook page, where the couple posted this picture.]

We sat down. Junko pulled out what appeared to be a hard-bound book that you would find on a coffee table from her purse.

It was a book filled with photographs of their wedding day. I looked through each page and began to recall the day we had spent together. They watched patiently and eagerly as I turned from one page to the next.

Before they left, Takahiro asked someone to take a photograph with the three of us – Takahiro, Junko and myself. We then said our goodbyes bowing, smiling and hugging one another like old, old friends.

Almost two centuries ago American missionaries set sail for Hawaiʻi out of Boston harbor. They were among many who would be sent not only to Hawaiʻi but to other countries around the world through the work of the American Board of Commissioners for Foreign Mission. Down through the years many, many, many others were sent.

Today the mission field is changing. There was a time in the history of our Hawaiian churches when it was said we were “mission churches.” But that is no longer the case at least for us here in Mākena. We are no longer a “mission church” dependent on others but a “church in mission.”

While some may insist that we continue to send missionaries out into the world, what I realized in meeting Takahiro and Junko a few days ago is that the world is coming to Maui, to Mākena, to Keawalaʻi. Just last Sunday, Joshua Nelson – an African American Jewish Gospel singer – came to share not only his music but his aloha. This week we welcome the Ying Quartet and others thanks to the dedicated work of Katherine Collier and Yizhak Schotten of the Maui Classical Music Festival. 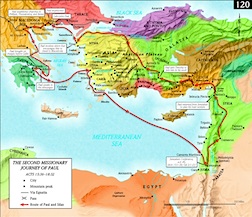 Long before American missionaries found their way to our islands, the Apostle Paul received a vision of a man pleading with him to come to a place called Macedonia. Paul was convinced that God was calling him and others to proclaim the good news to those who were in Macedonia. So he set sail with his companions from Troas to Samothrace to Neapolis and then to Philippi to seek out those who might respond to the proclamation of his new found faith. (Click on the image above left [or here] to see a larger version of the map of Paul's second missionary journey.)

On a map, it appears that it was a far less arduous journey than the one taken by those who set sail from Boston in 1819 through the passage around Cape Horn in South America and on to the Kailua Bay in Kona. But Paul’s journey was not without its difficulties especially when we consider that the route he took brought him to Europe for the first time and that his journey ended not with “a man of Macedonia” but with “a woman named Lydia.” It was a journey that took him to what he considered to be “the ends of the earth.” (Acts 1:8)

At first it would seem that Paul and his companions were missionaries looking for new converts. But what is critical for us to recognize is that Lydia was a woman of no small stature that she was in charge of her own household. She was in command of her property. She did not depend on a man to confer her status. (Feasting on the Word, Year C, Volume 2, Bartlett & Taylor, Westminster/John Knox Press, Louisville, Kentucky, 2009, page 476)

Yes, it is true that some have said she was a financially independent woman who was Paul’s first convert in Europe.” (Ibid.) But Lydia responded and was baptized not simply because of Paul’s proclamation but because she worshipped God and because “the Lord opened her heart to listen eagerly to what was said by Paul.” (Acts 16:14)

In other words, proclaiming the good news is what we do. It is not my responsibility or your responsibility to “convert” others from their ways. Ronald Cole-Turner is a theologian who puts it this way: “Paul does his part and Lydia hers, but it is God who guides all things and works in and through all things, not just for good but for what would otherwise be impossible. It is the Spirit who brings Lydia to Paul so that she can hear the gospel.” (Ibid.)

Jesus said, “Those who love me will keep my word, and (God) will love them, and we will come to them and make our home with them.” (John 14:23-29) It is that love that prompted Lydia to say to Paul after she and her household were baptized, “Come and stay at my home.” (Acts 16:15)

My hope and my prayer is that someday Takahiro and Junko will return to Maui with their own children and say to them, “This is the place where our lives were changed forever.” I would welcome the opportunity, then, to welcome them “home” – not to a geographical location but to a “home” where love abides.

As we gather to share in the eating of the bread and the drinking of the cup, we count as brothers and sisters in Christ, people of all ages, tongues and races. May God’s name be praised.