"You Are My Friends"

They came from Haʻikū, Waiʻehu, Kahului, Wailuku and other communities around Maui to remember and celebrate the life of their Kumu hula - Ualani Makaʻike Calleja. When she was first diagnosed with cancer several years ago, we included her in our weekly prayers.

For a time it seemed the disease was held at bay but it returned and on April 8, 2017, Ualani died. Many gathered here a month later on May 6th to celebrate her memorial service. Last Saturday, her haumana, her students returned for the celebration we call the ʻAha ʻAina Wai Maka or Feast of Tears. 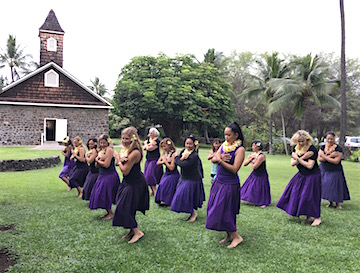 The ʻAha ʻAina Wai Maka, a year later, was not a somber occasion but a time of great joy. No more suffering or pain, no more sorrow or despair, even death itself was no more.

I met with Kēhaulani Kaneholani-Santiago in preparation for our time together last weekend. We hard an opportunity to meet and to talk. She explained that following Ualani’s death, the haumana did not want to give up dancing hula. Kēhau explained that no plan was in place for the halau to continue.

She was one of three alakaʻi or assistants to Ualani, but none of the women were kumu hula. They sought the counsel of Kumu hula Hōkūlani Holt and over the course of several months that followed Kēhau went through the process of her ʻūniki.

She was tested through a series of exercises that focused on her knowledge of hula, oli (chanting) and many other aspects of hula. Upon completion, the title of Kumu hula was conferred upon Kēhau in what was essentially a “graduation” ceremony. Kēhau was clear about the need to follow the protocol for carrying on the Ualani’s work.

When we met to prepare for the gathering, Kēhau was no longer an alakaʻi but a Kumu hula. In speaking with her. what struck me was the desire of the women to remain together as hula sisters. Their love of hula and the joy that it brought to their lives were palpable as they danced at the reception that followed the service. But even more striking was their love for Ualani and their love for each other – yes, as hula sisters – but also as friends.

It was a feast – not only of food – but of music and dance and shared memories. Ualani’s son, Cody, came in from Oʻahu to honor his mother’s legacy. As we watched the women dance, I remarked, “For folks who know hula, they are often able to identify the dancers’ teacher by observing how they danced – the movement of the hands and feet. I see your mama.”

As we near the end of this Easter season, our reading The Gospel According to John highlights the primary teaching of Jesus. Several key terms warrant our attention. They include: abide, love, joy, commandment and friends (Preaching Through the Christian Year B, Craddock, Hayes, Holladay& Tucker, Trinity Press International, Harrisburg, Pennsylvania, 1993, page 265).

As disciples of Jesus Christ, we know that love is the foundation of our living. “To love is to be for another and to act for another, even at cost to oneself. The supreme act of love is the giving of one’s life for the other” (John 15:13).

While those who are in a halau may know the former well – that is to be and act for another – it is not likely that they would ever be called upon to offer the supreme act of love required in the latter – that is giving up one’s life for another. The primary basis upon which our love for one another is measured is God’s love for the world (John 3:16) and that according to Ualani’s son Cody is something she understood.

The writer of John reminds us that we are no longer simply servants of Jesus. Instead, we are his friends. Jesus assured his early disciples and he assures us today: “You did not choose me but I chose you.”

The command to love one another is at the heart of our reading. While we may be tempted to see such love as only “in-house”, we know God’s love is for the whole world (John 3:16).

Cody reminded me that for several years prior to his mother’s death, she taught hula to women who were incarcerated. She saw hula as a way for the women to be strengthened in their resolve to transform their own lives. She became their Kumu hula, their teacher.

All of Ualani’s haumana, whether free or imprisoned, were not simply her students, but her friends. I imagine she may well have paraphrased a portion of our reading this morning. “I have called you friends, because I have made known to you everything that I have heard from my [Kumu].”

Shane Claiborne is writer and founding member of the Simple Way, an intentional Christian community established in Philadelphia, Pennsylvania. He is a writer and an author.

I recently came across a quotation of something he said that demonstrates the importance of not only loving one another but loving others. He wrote: “Only Jesus would be crazy enough to suggest that if you want to become the greatest you should become the least. Only Jesus would declare God’s blessing on the poor rather than on the rich, and [only Jesus] would insist it’s not enough to just love your friends. I just began to wonder if anybody still believed Jesus meant those things he said.” (The Sun, Issue 509, May 2018, Congers, New York, page 48).

I often wonder that as well.