"I know my own and my own know me?"
The Rev. Kealahou C. Alika

On the way in to Mākena the other morning my ear caught a news story on Hawai‘i Public Radio. The storyline by Christopher Joyce on Morning Edition was about how “America’s Protected Natural Areas Are Polluted, By Noise.” (NPR News, Thursday, May 4, 2017)

According to the story, “New research based on recordings from 492 protected natural areas reveals that they’re awash in noise pollution. Researchers from Colorado State University spent years making the recordings by setting out microphones in natural areas across the country. They caught all sorts of wildlife sounds, such as rutting elk and howling wolves. But they were also after “background” sound – wind, rain, birdsong, flowing streams and rivers, even bubbling mudpots in Yellowstone National Park.”

“They compared the decibel level of this natural background with the intrusive noisiness of human activity. And they discovered that in two-thirds of the places they studied, the median decibel level of man-made sounds came from within the area, such as road traffic, as well from outside, such as passing jets or mining and logging equipment.”

“And in more than 20 percent of the areas studied, the unnatural sounds were 10 times as loud as the natural background. The result is ‘fairly shockingly high levels of noise pollution within protected areas,’ says Rachel Buxton, lead author of the study, which appears in the journal Science.”

“Buxton, an ornithologist, points out that adding just a few decibels of artificial background sound, like that of a jet plane, makes it harder to hear what’s around you: a stream, wind through the trees or wildlife. Even with an increase in unnatural sound of 3 decibels, ‘if you could hear a sound before at 100 feet, now you can only hear it from 50 feet,’ she explains.”

“The National Park Service is well aware of the problem. It has a scientist dedicated to studying noise in parks: biologist Kurt Fristrup. He says people who are used to urban soundscapes might not know what they’re missing.”

“‘It can make for an immersive experience when you listen carefully enough,’ he says, ‘to hear all those sounds that the animals around you are also attending to.’”

“For people, listening to natural sound may be optional. But animals have to listen – for danger from predators, for example. Or conversely, predators such as owls need to hear their prey, like the rustling of a mouse in the leaf litter. Hearing well means surviving, Fristrup says.”

“‘For these animals, it’s literally a matter of life and death if they miss these subtle sounds of nature: the sound of a footfall or the sound of another animal breathing,’ he says.”

It may be that Jesus may not have known much about ornithology - the study of birds or biology – the study of living organisms, but it is clear that he knew something about sheep. He makes the case that sheep recognize the voice of their shepherd and they follow him.

If they do not recognize the shepherd’s voice, they will not follow a stranger. It is literally a matter of life and death.

In our reading from The Gospel According to John, there is a bit of confusion as Jesus attempts to clarify or to explain that he is “the gate for the sheep.” (John 10:7) But if Jesus is the gate, who is the shepherd, the one whose voice the sheep recognize? And who is the gatekeeper, the one opening the gate and closing it for the sheep to enter?

These questions were raised by the Rev. Jeffrey M. Gallagher, the senior pastor of the United Congregational Church of Tolland in Connecticut. (Christian Century, April 12, 2017, page 21) Taken separately, Gallagher says, “Jesus can be the gate that separates the sheep from the world outside, or the gatekeeper who lets people in and keeps people out, or the shepherd whose voice the sheep know.” (Op. cit.)

But Gallagher goes on to insist that the problem with the text is not who is shepherd or gatekeeper, but who the sheepfold. Who are the sheep? He writes, “A sheepfold can do only two things: hold something in or keep something out.” (Op. cit.)

That is an enormous and challenging burden for us when we realize we are the sheepfold and if we see ourselves as the sheepfold, do we insist that others must be “like us” in order to belong or do we decide to simply keep them out.

But thankfully we are neither the shepherd nor the gatekeeper. We are not and we can never be- to borrow an acronym - the ICE (Immigration and Customs Enforcement) agents of heaven.

If we are the sheep of his pasture, then we do well to hear Jesus’ voice amid the “noise pollution” of those clamoring for our attention especially on social media – Facebook, Gab, Google+, Instagram, LinkedIn, Pinterest, Reddit, Snapchat, Tumblr, Twitter, Viber, WeChat, Weibo, WhatsAp, YouTube and Baidu Tieba and I don’t even know if I am pronouncing that correctly.

So the question is, do we know him? Do we know Jesus? I have shared the following anecdote with you before, so for some of you I will be repeating myself about the story of St. Peter at the gate, not Jesus, not God. I have added a few embellishments.

Peter is essentially an ICE agent there to decide who finally gets into heaven and who doesn’t. While he is busy at the gate, far on the other side of the chain link fence – yes it is a chain link fence, not a wall – there is a noticeable commotion.

A slight breeze catches some dust as Peter notices a scraggly-looking bunch of folks digging down into the ground with their bare hands tossing large handfuls of sand and dirt behind them. On the inside of the fence, he notices an equally scraggly-looking fellow lifting the fence with one hand and grabbing onto those squeezing underneath the fence with the other.

Peter is beside himself. He walks over and in a voice of pure indignation, shouts, “What are you doing!?!

The man looks up at Peter and in that instant there is a clear look of recognition: “Jesus!?!”

Jesus winks at him and placing his finger across his lips, whispers, “Sshhh,. they’re my friends.”

Do we hear that Jesus? The one who says, “Ssshhh!”

“Listen to my voice. I did not come to steal and kill and destroy, neither should you.” (John 10:10)

“Close the borders” some say. Others say, “Open your hearts,”

“Go back to where you came from,” some say. “Come all who are weary and heavy laden,” others say.

So it is that we struggle to hear his voice. The biologist Fristrup reminds us that being able to hear for animals means being able to survive. But Jesus wants us know that he did come into the world for us to simply survive but he came that “we may have life and have it abundantly.” (John 10:10) 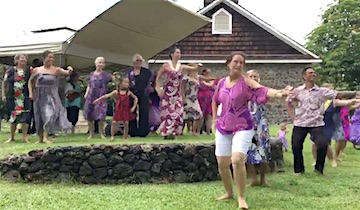 That life of abundance was on full display yesterday as hundreds of family members and friends gathered in this sanctuary to remember and celebrate the life of Ualani Maka‘ike Calleja of Paukukalo. It was a day filled with stories and prayers, music and food, and lots and lots of hula.

Ualani was a Kumu Hula or teacher of hula to many haumana or students who were a part of yesterday’s celebration. The day began in the quiet early morning hour when her husband Greg drove up with a truckload of various items for the pā‘ina or reception that followed the service.

Over the time that followed, more and more family and friends began to arrive to help set up tables and chairs. Tents went up. The musicians set up their equipment and soon the grounds of the church was filled with the activity of people scurrying about.

At the close of the service Cody took Ualani’s ashes to the north end of Maluaka Beach, just south and around the corner from us. He was joined by others as he paddled out to release her ashes into the ocean.

Almost everyone made their way to the beach. Many waded into the water to set their flowers and lei adrift in a final moment of aloha.

At around 1:30 in the afternoon Phil arrived. He came by the office to remind me that the musicians for this year’s Maui Classical Music Festival were due to arrive at 2:00 p.m. for a rehearsal. He wondered whether or not all of the outside activity would affect the musicians who would be rehearsing here in this sanctuary.

It turned out that as the afternoon wore on they were able to rehearse. If you happened to walk by the outside mound listening to I Kona Mau Lima singing “Alekoki” on your way to the restroom past the makai door, you could hear music from a clarinet, viola and piano drifting out through the church windows.

The sound of music was everywhere.

By about 4:00 p.m., most of the clean-up work outside was done. All of the musicians – inside and outside – were soon on their way.

What was only moments ago a yard filled with family and friends remembering and celebrating the life of a remarkable woman and a sanctuary echoing the sounds not of a guitar or ‘ukulele but a clarinet, viola and piano—was now empty and quiet. The chickens reappeared across the street as the parking lot emptied. My dog Kiko took her place in the center of the grassy mound content with guarding the area.

When I came inside the church, Cody was sitting on a pew with his dad and a friend. There was a moment of quiet.

The clouds overhead had tempered the heat of the sun. The trade winds swept in through the side doors and the windows. The birds returned to their singing. The sound of waves joined the chorus.

“This is the time of day when it is the most beautiful,” I said.

Cody’s dad remarked, “Yeah, if you listen you can hear the ocean and the wind.”

I thought about Ualani and as I listened, I could hear his voice say, “Sshhh! Not to worry. She is my friend.” (Matthew 25:21)