Several years ago a guest visiting our church collapsed while sitting near the gravesites close to our office building. He was a retired minister still active in community work. He was passionate about his work but he was also very ‘olu’olu - pleasant, amiable, congenial, cordial, and gracious. 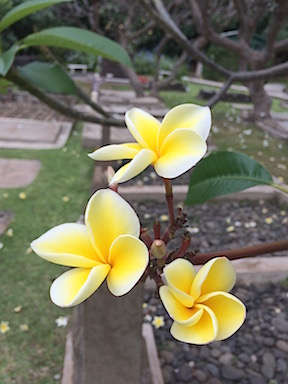 We were in the middle of a conversation when he suddenly stopped talking and turned ashen gray. He immediately slumped over as though a hypnotist had just snapped a finger. There was some concern about whether or not we would need to use the defibrillator that several of us had been trained to use in case of a medical emergency.

Fortunately, within a few minutes he opened his eyes, sat up with a dazed look unaware of what had just happened. But he was lucid and the color began to return to his face. A 911 call was made and Emergency Medical Technicians arrived soon afterward and determined that all of his vital signs were back to normal.

In the years that followed we have had numerous conversations about the needs of those who are members and friends of Keawalaʻi – from physical to emotional, from mental to spiritual. It may seem that our reading from the Gospel of John is an unlikely source for giving direction to how we might respond to such needs.

But a closer look at the passage provides us with key terms: abide, love, joy, friends (Preaching the Word B, Craddock, Hayes, Holladay & Tucker, Trinity Press International, Harrisburg, Pennsylvania, 1993, page 265). Having said that it is important to acknowledge that the context in which Gospel of John was written was vastly different from own.

Biblical scholars believe that the Gospel of John was written for a Christian community near the end of the first century. There was growing oppression by political forces within the Roman Empire. There were also serious conflicts with religious leaders in the synagogue. There are references in John of Christians being expelled from the synagogue (John 9:22; 12:42; 16:2).

Given the difficulties faced by the disciples in the early church at the time of the writing of the Gospel of John, Jesus seeks to reassure them that he will not leave them orphaned (John 14:18). The key term is “abide,” a word that was a part of our reading last Sunday.

Another key term is “love.” Dr. David Cunningham, a Professor of Religion, writes: “Such love is primarily interested in the good of the other person, rather than one’s own” (Feasting on the Word, Year B, Volume 2, Westminster/John Knox Press, Louisville, Kentucky, 2008, page 498). “ . . . it is helpful to recall that love in this Gospel is not a feeling rather, it is being for the other person and acting accordingly. Emotions are not absent . . . but neither are they central” to the text (Preaching the Word B, Craddock, Hayes, Holladay & Tucker, Trinity Press International, Harrisburg, Pennsylvania, 1993, page 265).

Carmelo Alvarez, a Professor of Church History and Theology, adds: “Love becomes a transforming power more than a superficial and emotional expression” (Feasting on the Word, Year B, Volume 2, Westminster/John Knox Press, Louisville, Kentucky, 2008, page 498). Abiding in love is what brings joy to life and that is a joy shared with friends.

It is out of this understanding that a seed was planted several years ago in conversations about our care for one another and for others. It began with the members of our Board of Mission & Outreach including Matti Christensen, Judy Fox and Dian Gruber.

From that early beginning and with Matti’s leadership, the circle of our conversations grew beyond the board to a steering committee that now includes Keith Campbell, Edie Kapiko, Cindy Mead, Tom Nelson and Anne Rowehl. A few weeks ago Hui Mālama o Keawalaʻi was born. The name of the hui or group reflects its goal - “to take care of each other – to mālama each other - in times of need.”

For the early church and for us today the key terms – abide, love, joy, friends – are “set within an order of continuity.” The sequence from God, through the risen Christ, to the church. That is to us – is “clear and vital.” (Preaching the Word B, Craddock, Hayes, Holladay & Tucker, Trinity Press International, Harrisburg, Pennsylvania, 1993, page 266).

Our care for one another through Hui Mālama o Keawalaʻi will be one sign of the power of love – of aloha – to transform and heal our lives. Sometimes just a phone call or visit will let others know we are thinking of them. On some occasions, the need may be greater during an illness or crisis and sometimes it may simply be the need for a ride to the doctor or a warm meal.

The other sign will be the prayers we offer for one another along the way. Today, we offer a prayer of blessing for whatever need you may wish to bring and lift before God.

In a moment we will invite those of you who wish to come forward for a word of blessing to do so. We will offer the blessing with kukui oil. The kukui is a symbol of light.

With the laying of hands and the anointing of oil, we will offer a blessing of light and strength. The blessing may be for yourself or for someone else.

You are invited to come forward if you wish. Come for all is ready.

Let us pray: We leave this place today, O God, abiding in the love of the risen Christ. We join all peoples and all the earth in singing your praises with joyful songs.

Let us roar with the sea, let us clap our hands with the flooding waters and let us celebrate your coming reign of justice to all people and to all the world. Let us sing the good news of your transforming and healing love. Amen.