"You Are in the World"

Keith died last week of chronic hypoxia and pulmonary hypertension. Members and friends of our church who knew Keith were aware that he made every effort to seek treatment to relieve the difficulty he had in breathing. 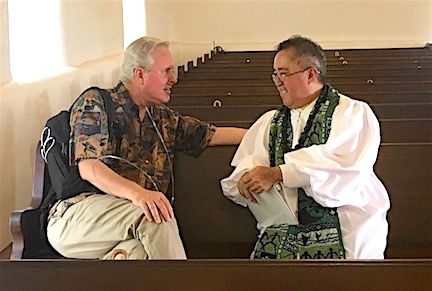 { Keith and Kahu in the sanctuary, a couple of years ago. Portrait by L. Nebres }

He touched many of our lives and many of you touched his life.

Keith underwent various medical tests to determine what caused the disease and how it might be treated more effectively. But after each visit, it became clear that they were no treatments that could reverse the impact of the disease on his body. It was a change for him – someone who was once an avid bicyclist and someone who enjoyed surfing.

He was told there was nothing more they could do except to keep him on oxygen for the rest of what would be a shortened lifespan. More than a year ago, Keith began his “end-of-life planning,” not out of any bitterness or anxiety but an acceptance of what we all know to be true – that in time we will all face our own deaths.

We sat down last summer to plan his memorial service. He asked about hymns that he wanted sung at the service. He suggested various readings for friends to read. He made other arrangements with Craig, his executor, to determine how best to dispose of his material possessions.

Keith knew that his death was imminent and so he planned everything ahead of time making certain he was not inconveniencing anyone. He was apologetic to a fault and he always seemed more concerned about others than himself. He wanted to be sure we were all going to be okay.

Today is the last Sunday of Easter.

“Jesus is returning to God, leaving behind disciples who are confused, afraid, and forlorn. We are not directly addressed, but we are very much in the mind of the One who is praying. The prayer is of Christ who is already ascending (John 17:11-13) (Preaching Through the Christian Year B, Craddock, Hayes, Holladay & Tucker, Trinity Press International, Harrisburg, Pennsylvania, 1993, page 277).

It was and is a prayer of farewell. Jesus knew he was going to die and his prayer became a plea to God to protect the disciples, to protect his friends. The Rev. Isaac Villegas, pastor of Chapel Hill Mennonite Fellowship in Chapel Hill, North Carolina writes in his reflections on our reading this morning: “Surrounded by his loved ones, Jesus begs God to watch out for his friends while he’s gone. ‘I am asking on their behalf,’ Jesus says as he offers his supplication” (Christian Century, April 25, 2018, page 21). He pleaded for God to “protect them ... ” (John 17:15) not out of the anguish he will suffer but out of the his abiding love for his friends. Jesus prayed for God to protect them and keep them safe as they went forth into the world to share the good news of Easter.

From the time his diagnosis until last week, we held Keith in our prayers – some of us were praying for a miracle that he would be healed of the disease. But Keith died. Some may have concluded that he was not healed.

I am not one of them. I will tell you that Keith was healed – not of the disease but of whatever sorrow and despair he may have experienced in his life; of the anxieties and fears that may have troubled him. In the end Keith understood the words of our opening hymn today: “In conflicts that destroy our health, our bodies clamor to be freed. Yet in our hearts we would confess that wholeness is our deepest need.” Such wholeness came to Keith and for that we give thanks to God.

Keith was with us in worship last Sunday. He did not look well. It became apparent that the time was near.

I was over at his home in Paukukalo on Monday evening. John and Craig were there. Auntie Edie and Kahu Danette were there the following day.

John, Craig and I had a chance to visit with Keith and each other. We shared more than a few laughs. Keith had a hearty laugh and I worried every time he did laugh that it required more oxygen.

John was going to stay the night. I had to leave. Craig was going back to Upcountry.

Today brings the Easter season to a close. We offer our prayers for healing each week. Today we offer the laying on of hands and the anointing of kukui oil. The blessing is for light and strength.

In a moment, those of you who wish to come forward may do so. The prayer of blessing may be for yourself, for someone else or for the troubles that seem to burden our world. It may be for Keith and for others whom we have loved deeply.

Come if you wish.