Sunday, May 14, 2017
Fifth Sunday After Easter
Festival of the Christian Home
Healing Service

"Believe in God, believe also in me"
The Rev. Kealahou C. Alika

I’ve been in a singing mood this week because of Mother’s Day. My mother had a beautiful voice. She was self-taught on the ukulele. She could play and sing Hawaiian songs and more often than not she could sing hymns in Hawaiian and English. 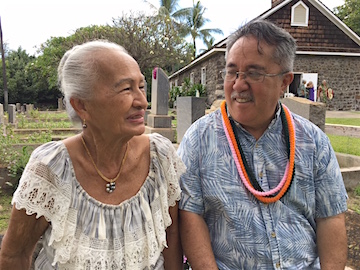 Now I am not a singer. My mother attempted to teach me as well as my brothers and my sister with a simple instruction on how to sing. “Okay, sing!”

“I’ve got a mansion just over the hilltop in that bright land where we never grow old. And someday yonder, we will never more wander but walk on streets that are purest gold.” (Mansion Over the Hilltop, Ira P. Stanphil) My mother loved that hymn.

We grew up singing that refrain from the hymn Mansion Over the Hilltop. I am not sure if it brought her any comfort in the years when her health began to decline and she became increasingly aware of her own mortality. My hope was that she would find some consolation in Jesus’ words to the disciples that come to us from our reading from The Gospel According to John as he began to bid them farewell.

“Do not let your hearts be troubled,” he said. “Believe in God, believe also in me. In my Father’s house there are many dwelling places. If it were not so would I have told you that I go to prepare a place for you? And if I go and prepare a place for you, I will come again and will take you to myself, so that where I am, there you may be also.” (John 14:1-3)

Down through the years many have found comfort and support in these words of scripture but the disciples seemed to find little solace in what Jesus had to say. The Rev. Shannon Pater, a United Methodist pastor, writes: The disciples “do not know it yet, but it is not just Jesus who is saying farewell; his crucifixion will mean the death of how they understand the messianic message and mission. All that they have hoped for throughout their lives, which they have believed has come to fruition in Jesus, will soon be nailed to a cross. It will be a long time before they realize that the messianic message is eternal, even if the Messiah is not immortal. Death will have neither the last nor the lasting word.” (Feasting on the Word, Year A, Volume 2, Bartlett & Taylor, Westminster/John Knox Press, Louisville, Kentucky, 2010, page 468)

But for now, the disciples are troubled. What is going to happen to them once Jesus is gone? What gradually becomes clear to us is that Jesus’ “promises carry a commission and his commissions carry a promise. He who sends also goes with those whom he sends, and he who commands to love empowers to love. And the reverse is equally true; he who loves expects the loved to love others, and (the one) who abides with his followers expects them to go just as (God) sent him.” (Preaching Through the Christian Year A, Craddock, Hayes, Holladay & Tucker, Trinity International Press, Harrisburg, Pennsylvania, 1992, page 273)

Somehow the thought of literally “wanting” a mansion and walking on streets of purest gold was at best self-centered and at worst selfish. More than mansions and streets of gold, Jesus makes three promises to the disciples. His farewell is not only to them, but to the church then and to us now.

First, “there is the promise of an abiding place with God. The word translated ‘dwelling places’ or ‘mansions’ is not so much a building or a structure but the noun form of the verb ‘to abide.’” Ibid., page 274.) What is striking is the promise is of lasting relationship with Jesus and with God.

Second, there is the promise of “a sure and clear way to God” (John 14:5-7) through Jesus and third, there is the promise “of a power not only to sustain the believing community in the world but also to enable it to do even greater works than Jesus did.” (John 14:12) The promise that is made is to those who believe in him and pray in his name. It is a promise made to the church as a community of faith. It is not a promise intended for a private audience of one and praying in Jesus’ name is not simply a formula for closing a prayer. (Ibid., page 274)

Today is our annual healing service. We offer a blessing with the anointing of kukui oil out of a koa wood bowl and the laying on of hands. The oil comes from the nut of the kukui tree. It is a symbol of light. The koa tree is the largest of the native trees in our islands. It is a symbol of strength.

In a moment, Kahu Danette Kong and I will invite you to come forward for a blessing of light and strength. You may indicate if the request is for yourself or someone else or for a concern you have beyond yourself. It is important to recognize that while we may pray for miracles, none of us will escape the inevitability of our own death. In 1967, Fred Pratt Green wrote the hymn “O Christ, the Healer, We Have Come.” It is in one sense both a hymn and a prayer – a prayer in preparation for our time in this moment:

O Christ, the healer, we have come
to pray for health, to plead for friends.
How can we fail to be restored
when reached by love that never ends?

From every ailment flesh endures
our bodies clamor to be freed.
Yet in our hearts we would confess
that wholeness is our deepest need.

In conflicts that destroy our health
we recognize the world’s disease;
Our common life declares our ills,
Is there no cure, O Christ, for these?

Grant that we all, made one in faith,
in your community may find,
the wholeness that, enriching us,
shall reach and prosper humankind.


[ Editor's Note: the lady in the photograph accompanying today's sermon is not Kahu Alika's mother. It is Aunty Norma Lei Noland, a beloved kupuna of the church, who came to Keawala'i yesterday morning to attend Uncle Jimmy Aarona's service of recognition as a licensed pastor. Aunty's dear husband of 65+ years, Joe Noland, passed away a couple of months ago, and this was Aunty's first time back to Makena since uncle died and we were all so very happy to see her. ~ L. Nebres ]