Just yesterday (Saturday, May 16, 2015), the Rev. Danette Kong of Wailuku sought and received a privilege of call to serve as an ordained pastor in the ʻAha O Nā Mokupuni ʻO Maui, Molokaʻi ame Lānaʻi or Tri-Isle Association of the Hawaiʻi Conference – United Church of Christ. An Ecclesiastical Council was held here yesterday during the annual meeting of the association. 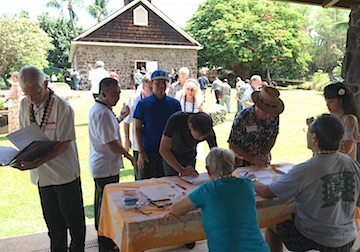 Over 125 delegates and guests from eighteen member churches and from several community groups with whom Kahu is affiliated through her work and ministry were in attendance. The Ecclesiastical Council included time for Kahu to share her spiritual journey and it was that sharing that touched on pivotal moments that shaped and reshaped her own life as a disciple – as a follower and as a learner – of Jesus Christ.

Her journey began with family – of a Caucasian mother and a Chinese father – who met while living in Georgia. At the time anti-miscegenation laws were still on the books in several states across the U.S. including the South.

I have always been troubled by how such laws ever came into existence because like Kahu Danette, I am also a mixed-race child. Over the years and through my own spiritual journey I have come to realize that my own faith has been shaped and reshaped by my own life experiences as a disciple - as one who learns and seeks to follow the teachings of Jesus Christ.

I have also come to realize that while we are in the world, but not of the world, we sometimes learn and follow what others teach us. I was born two months after the stage production of South Pacific by Rogers & Hammerstein opened on Broadway in New York City on April 7, 1949. Soon after it opened, many were quick to scrutinize its commentary regarding the relationship between different races and ethnic groups.

There was one song that was widely criticized for being too controversial and inappropriate for the musical stage. In the play the character identified as Lieutenant Cable sings “You’ve Got to Be Carefully Taught.”

The song is preceded by a line saying racism is “not born in you! It happens after you’re born...”

The lyrics to the song read:

There were those who challenged its decency and others who were certain that the lyrics were Communist-inspired. When the show was on a tour in Georgia, lawmakers introduced a bill outlawing entertainment they were convinced were inspired by the Russians. One lawmaker concluded that a song that justified interracial marriage was a threat to the American way of life.

But the musical endured and thrived. It went on to win the Pulitzer Prize for Drama in 1950 for its exploration of racial prejudice and in the years that followed it won numerous accolades including all ten Tony awards for which it was nominated.

The Easter season comes to an end today. It would be difficult if not impossible to sustain all of our “Alleluias” and shouts of exclamation that “Christ is risen” without the coming of the Spirit at Pentecost.

As this Easter season draws to a close and we move toward Pentecost, our reading from The Gospel According to John points us to a time of transition. Jesus anticipates his departure and so he offers a farewell prayer. He conveys his concern for the care and protection of the disciples once he is gone and their mission in the world modeled in his relationship to God (Feasting on the Word, Year B., Volume 1, Bartlett & Taylor, Westminster/John Knox Press, Louisville, 2008, page 544).

The writer of John emphasizes that the disciples are called and set apart to go into the world, in the midst of conflict and confusion (Ibid., page 546). Aware of what the disciples will face, Jesus prays for them and he prays in behalf of all of us and those of who have become a part of the church through succeeding generations (Preaching Through the Christian Year B, Craddock, Hayes, Holladay & Tucker, Trinity International Press, Harrisburg, Pennsylvania, 1993, page 277).

Kahu Danette’s presentation of her spiritual journey included not only spoken words but music, lots of music. My hunch is that she would be somewhat embarrassed for me to say that she is a gifted composer, lyricist, singer, arranger and musician.

Sometime ago Stephen Haines, our choir director, taught us an anthem composed by Carl J. Nygard Jr. in honor of the ordination of his niece, Johana Nygard, a minister of the Presbyterian Church. He based his lyrics on Isaiah 43:1-4.

The lyrics could have been based on this morning’s reading from The Gospel According to John. Isaiah offered his words of reassurance to the people of God’s steadfast love and abiding presence. I imagine when Jesus heard the words of Isaiah, he too was comforted knowing that the prayer was also for him.

Much may be said about Jesus’ farewell prayer for but what has value for me this morning is not the content of the prayer itself but for whom Jesus prays – his disciples. They were taught to love and to trust in God’s care. They were taught not to be afraid of those whose eyes or skin color were different from their own.

It was a lesson that would come to fruition on the day of Pentecost. 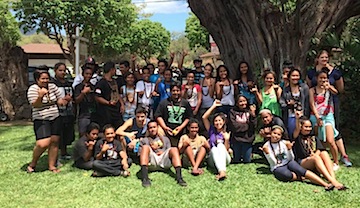