"You Are to Testify"

Yoko and Takenari Kikuchi live in Tokyo, Japan. They were married here on November 11, 2010. They stopped by for a visit in early May with their now 2-year-old son Takeharu. 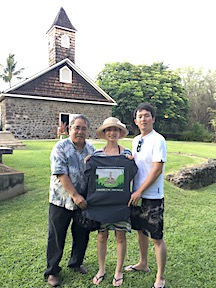 That same day Mei and Takashi Hashimoto of Osaka came by for a visit as well. They were married here last year on February 23, 2017.

Although my biological father was Japanese, I was raised by my maternal grandfather. In our household we spoke pidgin English. I grew up studying some Hawaiian, some Spanish and some German. I know Japanese words, but I do not speak Japanese and often the Japanese couples who return to Maui for a visit are limited in their English-speaking ability.

So we smile a lot and manage to find a few words in English that they recognize and a few words in Japanese that I recognize. More often than not they come with omiagi in hand, that is, modest gifts like a Japanese fan that the Kikuchis brought with them from Tokyo.

I hug, so they hug. They bow, so I bow. In what may seem like an awkward social moment to a casual observer, we became aware that our lives have been bound together because of the shared memory of an important moment in their lives whether we are speaking in Japanese or English.

In a video that was posted on Facebook last week, a New York attorney is seen and heard berating an employee at a fast-food chain in Manhattan. He is heard telling him: “Your staff is speaking Spanish to customers! He spoke it, he spoke it, she’s speaking it,” he says pointing to individual employees.

“It’s America!” he continued. Although he seems ready to leave, he turns and offers a final threat. “My guess is they’re not documented, so my next call is to ICE [Immigration and Customs Enforcement] to have each one of them kicked out of my country.”

“If they have the (expletive) to come here and live off of my money – I pay for their welfare, I pay for their ability to be here – so the least they could do is speak English.”

The video has been seen over four million times. It was taken by customers who started speaking Spanish with their server. It was then that the man jumped in and began threatening them.

One Sunday morning a few years ago a visitor objected to our use of the Hawaiian language in worship. “It’s like hearing the Mass in Latin,” he said. “No one understands what is being said.”

“Well,” I explained, “we provide a written translation in English for the Call to Worship, The Lord’s Prayer, and the Hawaiian-language hymn so you can understand what is being said.”

I was prepared to hear him say, “This is America. Everything should be in English.” But he just walked away. I think he was unaware that through the encouragement of our Maori ʻohana in Aotearoa (New Zealand) and others, a Hawaiian language renaissance blossomed in the 1970s and as a result there are Hawaiian language schools throughout our islands today.

I think he was also unaware that Hawai‘i has two official languages – Hawaiian and English – and that our island residents speak a multitude of other languages including –Tahitian, Maori, Tongan, Samoan, Kosraen, Pohnpeian, Marshallese, Chuukese, Mandarin, Cantonese, Japanese, Korean, Ilocano, Tagalog, Visayan, Spanish, and Vietnamese as well as other European and Middle Eastern languages. 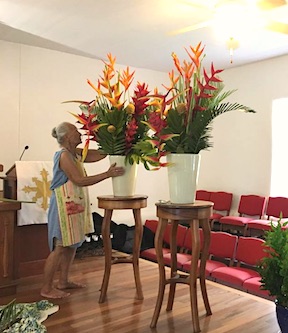 Today is Pentecost – for the Jews in the first century it was an early harvest festival that came to be a commemoration of the giving of the law at Mt. Sinai; for Christians it was a celebration of the outpouring of the Holy Spirit upon the church – a day when Jews from many nations gathered in Jerusalem.

In our reading from The Gospel According to John, Jesus is aware that his death is imminent. He knows that political and religious adversaries are “looking for an opportunity to kill him” (John 7:1).

His disciples come to realize that their own lives are at risk as they continue to follow Jesus. It is Thomas to tells the other disciples, “Let us also go that we may die with him” (John 11:16).

Events that will lead to Jesus’ arrest, trial and crucifixion quickly unfold. Jesus goes into hiding. Everyone is afraid. Jesus knows he cannot avoid what is inevitable (Christian Century, April 25, 2018, page 23).

He gathers his disciples for a final evening together. He washes their feet. They will eat bread and drink wine. He knows this night will be the last time they will be together.

“So he tells them that he loves them – he professes his love over and over again, three times” in previous passages (John 13:34; 15:9; 15:21) (Op. cit.). It is very likely that he spoke to them in Aramaic or perhaps in Greek. It certainly was not English.

But whether in Aramaic or Greek, the disciples understood that Jesus loved them. He promises the Holy Spirit will come to them to remind them of him and will bear witness of his life in his absence.

The Rev. Isaac Villegas serves as the pastor of Chapel Hill Mennonite Fellowship in Chapel Hill, North Carolina. Villegas sees the promise of the Holy Spirit as a sign of Jesus’ overwhelming affection for the disciples.

He writes, Jesus “cannot stop loving his friends. All he wants is everlasting communion with them. Every last moment with them is a delight, moments he will take with him beyond this world, cherishing the thought of his loved ones until they are reunited someday.” (Op. cit.)

In the meantime, while he is gone, the Holy Spirit will keep alive the memories of their time together. Jesus tells the disciples, “I still have many things to say to you, but you cannot bear them now. When the Spirit of truth comes, he will guide you into all the truth.”

And the truth is, he loves them – whether it was said in Aramaic or Greek – and he loves us whether we say in Spanish, Hawaiian or English.

In The Acts of the Apostles, we read: “When the day of Pentecost had come, they were all together in one place. And suddenly from heaven there came a sound like the rush of a violent wind, and it filled the entire house where they were sitting” (Acts 2:1).

Today, we celebrate the birth of the church in recognizing the sure and certain sign of the presence of the Holy Spirit through the many languages that were spoken that day. “All of them” – those who had gathered in Jerusalem from many nations– “were filled with the Holy Spirit and began to speak in other languages, as the Spirit gave them ability” (Acts 2:4).

The official language in the U.S. is English but we know many Americans are bilingual, some multilingual. What a great and marvelous gift they bring to us all.

It may be good for us to embrace the gift they bring. We should not be surprised that the language of heaven will probably not be English. It will be the language of aloha, of love – the very love for which Christ died on that fateful Easter day.

As Yoko and Takenari turned to leave after our visit a few weeks ago, we shook hands, we bowed and we hugged. Our last word to each other was “Aloha.”