"Because I live, you also will live"
The Rev. Kealahou C. Alika 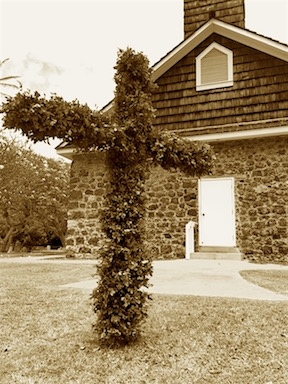 The season of Easter will be coming to an end this week. Throughout this season we have looked at the meaning of the resurrection of Jesus Christ in our lives and in the world.

In our reading from The Gospel According to John we find Jesus saying farewell to his disciples – those like Peter, James and John who left their fishing village to follow him and those like Martha and Mary who welcomed him into their home. He is aware of his impending death and so he seeks to encourage them to continue the work he began, aware that very soon, the disciples will all “feel alone and abandoned in a hostile world.” (Preaching Through the Christian Year A, Craddock, Hayes, Holladay & Tucker, Trinity International Press, Harrisburg, Pennsylvania, 1992, page 275)

There will come a time and moment in all of our lives when we will find ourselves having to say farewell to those whom we love. What would be our final words?

As important as “end-of-life” planning is for our sense of well-being, I imagine we would be less concerned about the disposition of material things – about who gets the house and who gets the car; about being certain some is walking the dog and watering the plants - and more concerned about the well-being of those whom we love. It is a point that Jesus makes when he tells the disciples, “If you love me, keep my commandments.” (John 14:15)

The Gospel According to John was written in a time when the Roman empire dominated the ancient world. The people were “surrounded by agents of the emperor, images of imposed dominion, and the weapons to enforce imperial power.” (Feasting on the Word, Year A, Volume 2, Bartlett & Taylor, Westminster /John Knox Press, Louisville, Kentucky, 2010, page 490)

In the midst of such an empire, Jesus makes a “strikingly different claim about the power and order that love brings to life and relationships.” (Op. cit.) It is as others have pointed out a sharp contrast to the way of the world and its understanding of power. It is a contrast we see in the way of the world in which we live today.

The love Jesus wants us to embrace is not an abstract philosophical concept or a “talking point” you might expect on social media. It is a love lived and revealed in life, relationships and actions.

To love as he loved is to feed the hungry, touch the untouchable, heal the sick and so much more. To love as he loved is to care for those around us whether it is family or neighbor, friend or stranger. Instead of the power to dominate, to exclude, Jesus invites the disciples then and he invites us now to live a life of service and compassion; to seek the “well-being of all persons regardless of social status.” (Ibid., page 492)

The world would have us believe that there is power in the empire – whether Roman or American or Russian. As Americans we know that all too well. We sell more weapons of war to other nations than any other nation.

Our current military spending is $596 billion, more than the $350 billion in military spending for Saudi Arabia, Russia, Britain, France, India and Japan combined. If the proposed budget headed to the U.S. Congress is passed, $10 billion will cut from work study programs and subsidies for college students. Other programs benefitting the poor, women, the elderly and children also face possible cuts. An additional $54 billion may be added to our military spending bringing the total to $650 billion.

All around the world we see the turmoil that comes from the reliance upon military force and might – in Egypt, North Korea, Venezuela, Brazil, the Philippines, Afghanistan, Iran, Iraq, Turkey, Russia, Yemen, South Sudan, Nigeria, Syria and Somalia. Millions suffer. Millions die.

Enuma Okoro is a Nigerian American writer. He points out that the command to love is “a call from God to duty and obedience ... ” (Christian Century, April 26, 2017, page 19)

He paraphrases Jesus’ command: “If you love me, all I’m asking is that you keep my commandments.” He goes on to say that Jesus is asking above all else that we try to love one another, if for no other reason than because he loved us. (Op. cit.)

Jesus eventually makes clear to the disciples, “I have said these things to you while I am still with you. But the Advocate, the Holy Spirit, whom the Father will send in my name, will teach you everything, and remind you of all that I have said to you.” (John 14:25-26)

In charging the disciples “to be obedient in love” Jesus also promises them and he promises us the comfort of the Holy Spirit. (Preaching Through the Christian Year A, Craddock, Hayes, Holladay & Tucker, Trinity International Press, Harrisburg, Pennsylvania, 1992, page 275) Okoro imagines that it was likely Jesus went on to say, “Well, if you love me, then find a way to show love and hospitality to those who are made in my image and may call me by another name. If you love me, then speak out when you see people mistreated for being made in another variation of my image. But do it in a way that honors me, not in a way that honors the world.” (Christian Century, April 26, 2017, page 19)

Let us pray: We give thanks, O God, for the gift of life and breath that is ours today through the Risen Christ. Make us eager to do good and to resist evil, and grant us the wisdom to recognize the difference. Fill us with the assurance in all we say and do that we may share the hope that is within each of us in gentleness and reverence. Amen.