We took Wini’s and Masa’s ashes out on our canoe yesterday morning. Family members and friends gathered here to remember and celebrate Wini’s life as a sister, wife, mother, grandmother, cousin, neighbor and friend.

Masa died several years ago. He and Wini had been married for many, many years. It was Wini’s wish that his ashes be released with hers into the ocean.

I drove by Mākena Landing on the way to the church. I didn’t have to stop to notice that there was a shore break that would require a careful launching and landing of the canoe. 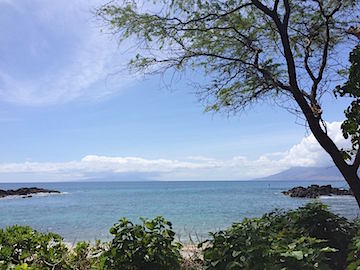 By the time the memorial service was pau here at the church and we had taken the canoe to the Landing, the ocean conditions had changed considerably. The wind had picked up and the waves were bigger.

As we pushed off from the shore, a wave broke over the bow of the canoe and water flooded the bottom from front to back. When we were a safe distance from the shoreline and out on the open ocean Phil, our steersperson, called out “Lawa!”

We paused and Phil gave the instruction to bail out the water that was sloshing around our feet. It took a few minutes and then we were on our way.

There were kayakers and snorkelers out on the ocean in conditions that were less than ideal. The ocean swell was in constant motion and the wind seemed to come from one direction and then another.

The wind was strong enough that once the ashes were scattered we proceeded to return to the Landing. It is usually our custom and practice to circle the ashes and flowers released into the ocean at least three times. But given the conditions we were in, it made sense that we return to shore as soon as possible.

While on our way back I thought about how the disciples must have felt on that first Pentecost Sunday centuries ago. The Bible says that when the day had come, they were all together in one place. “And suddenly from heaven there came a sound like the rush of a violent wind, and it filled the entire house where they were sitting.” (Acts 2:1-2)

Although I would be the first to say that the wind out the channel yesterday was far from a violent wind, it was strong enough that it caught my attention and the attention of anyone who is familiar with the waters surrounding our islands here in Hawaiʻi. I thought about Jesus’ words to Nicodemus: “The wind blows where it chooses, and you hear the sound of it, but you do not know where it comes from or where it goes. So it is with everyone who is born of the Spirit” (John 3:8).

Like the wind, the Spirit goes where it chooses and like the early disciples, we do not know where it comes from or where it goes. We cannot limit the Spirit’s movement just to those who were gathered in that room.

Pentecost is celebrated by our Jewish forebears as Shavuot. The festival commemorates the giving of the torah on Mount Sinai. The tongues of fire that appeared and rested on the disciples recall the pillar of fire that led the people in the Exodus and the fire that descended on Mount Sinai when Moses was given the Ten Commandments.

Pentecost is celebrated by our Christian forebears as a festival which commemorates the birth of the church. But Pentecost is part of a larger story that unites us as human beings with all of God’s creation.

In our reading from The Acts of the Apostles it is Peter who interprets the coming of the Spirit as reaching beyond Sinai to all of God’s creation. When Peter quotes the prophet Joel, we discover that the Spirit is being poured out on “all flesh” (Acts 2:17).

In Hebrew, this refers to all living things since he speaks of the renewal of creation. During drought, wild animals cry to God (Acts 1:20) and when God takes pity on land and people Joel says, “Do not fear, O soil, be glad and rejoice ... Do not fear, you animals of the field, for the pastures of the wilderness are green; the tree bears its fruit, the fig tree and the vine give their full yield” (Joel 2:21-22).

The Spirit that comes at Pentecost comes to humans and all creatures for the renewal of creation. As stewards or caretakers of the world in which we live, we face enormous challenges locally and globally – from genetically modified organisms to telescopes on mountaintops; from water resources and water rights to climate change.

As family members and friends gathered here yesterday to say aloha to Wini and to Masa, someone noticed a rainbow over the ocean. The rains from the night before and that morning that drenched other parts of island were turning into a light mist as the morning sun rose.

For Hawaiians the ānuenue or rainbow was a favorable sign perhaps not unlike the covenant that God established with Noah after the Great Flood (Genesis 9:1-17). The Book of Genesis makes clear God’s intent: “As for me, I am establishing my covenant with you and your descendants after you, and with every living creature that is with you, the birds, the domestic animals and every animal on the earth with you, as many as come out of the ark. I establish my covenant with you, that never again shall flesh be cut off by the waters of a flood, and never again shall there be a flood to destroy the earth.”

“God said, ‘This is the sign of the covenant that I make between me and you and every living creature that is with you, for all future generations; I have set my bow in the clouds and it shall be a sign of the covenant between me and the earth (Genesis 9:9-13). When the bow is in the clouds, I will see it and remember the everlasting covenant between God and every living creature of all flesh that is on the earth” (Genesis 9:16).

It was not until we returned to the church from the Landing that Kurt, Wini’s son, told me that as we paddled into the bay he noticed that a turtle had broken through the surface of the water. The Spirit came through the house where the early disciples gathered centuries ago like the rush of a mighty wind. That same Spirit swept over the face of the waters in the bay just outside our windows for Wini, for Masa and for the turtle.