His face was gaunt and his eyes looked weary. One hand was balled into a fist. The other was open. He kept rubbing them together as though he was trying to let go of one thing but still hold on to another.

“You know!” I said. “Deep down inside you know what you need to do.”

“If you are looking for an answer, you won’t find it here,” I said pointing to my head. “You need to go deeper, to your gut,” I added pointing to my belly. “When we connect what we feel here with what we think here, the answer will come.”

Physically, it was clear whatever he was feeling was the cause of his distress. But each time he attempted to articulate in words what was going on in his life, he turned to his thoughts, to his mind.

Our compulsion as human beings to separate our thoughts from our feelings continues to be a source of debate among philosophers, theologians, psychologists, medical professionals and scientists. But any separation between the two is at best and at worst a source of unnecessary distress.

Philip Shepherd is the author of New Self, New World: Recovering Our Senses in the Twenty-First Century (2010). Shepherd explores implications of the assertion that we have two brains: “in addition to the familiar cranial brain in the head, there is a ‘second brain’ in the gut . . . . lining the gastrointestinal tract as an independent brain, and a new field of medicine – neurogastroenterology.” (The Sun, Issue 448, Chapel Hill, North Carolina, April 2013, page 7)

Shepherd points to a story that shapes what it means to be a human being. He writes, “It tells us that the head should be in charge, because it knows the answers, and the body is little more than a vehicle for transporting the head to its next engagement. It tells us that doing is the primary value, while being is secondary. It shapes our perceptions, actions and experiences of life.” (Op.cit., page 8)

For some the idea that the brain is centered in the belly rather than in the head appears in other parts of the world. For the Chinese the word for belly means “mind place.” For the Japanese hara, which means belly, represents the seat of understanding.

Shepherd makes the case that whether one is man or a woman there is both a masculine and feminine aspect to our thinking. It is a balance of the complementary existence of both within us that is needed. They are inseparable and that is a point which Shepherd underscores in his work. 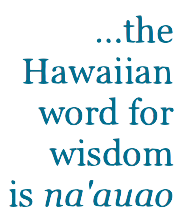 The Hawaiian word naʻau has several meanings including: intestines, bowels, guts; mind, heart, affections, of the heart and mind; mood, temper, feelings. What I appreciate about the Hawaiian understanding is that it is the same word used for the cranial brain in our heads and the other brain in our gut. They are inseparable.

In our reading from The Book of Proverbs the Hawaiian language Bible reads: “ʻAʻole anei i hea mai ka naʻauao? ʻAʻole anei i pane mai ka ʻike i kona leo? Does not wisdom call and does not understanding raise her voice?”

The Hawaiian word for wisdom is naʻauao. It literally means “daylight mind.” When we are able to connect knowledge in the cranial brain with knowledge in the brain in our gut, there is Wisdom.

The writer of The Book of Proverbs reminds us that Wisdom was present at the beginning of creation. Wisdom’s joy is in God’s inhabited world and in the human race. She is able to provide her guidance and direction.

As we enter this season of Pentecost we give thanks for the promise found in our reading from The Gospel According to John. Like Wisdom, the Spirit has come to guide us into all the truth. (John 16:13)

It is a connection more easily said than done. It is not an easy undertaking. We have learned to separate our thoughts from our feelings. So it is not surprising that we would find ourselves saying - “When I think about it, it drives me crazy” – as though we are affected only by the thoughts in our heads.

I thought about what Samuel Langhorne Clemens said about the human mind. Known more popularly by his pen name as Mark Twain, he wrote: “It is discouraging to try to penetrate a mind like yours. You ought to get it out and dance on it. That would take some of the rigidity out of it.” (The Sun, Chapel Hill, North Carolina, April 2013, page 48)

I did not say anything more to him. He stopped rubbing his hands and began talking about how he felt. He moved his feet across the floor as though he was about to dance.