The only thing I recall my mother saying about my birth was that I was a very big baby. I weighed in at 10 pounds on the morning of June 13, 1949. My mother never said anything about her pregnancy or about how her labor went in giving birth to me.

Whenever the conversation about my birth came up in our family or among friends, she would simply say, “He was one big baby.” I always thought there was a bit of relief in her voice – as though it was a way of saying it was painful but it’s over. 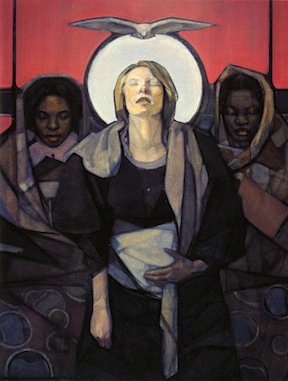 Katherine Willis Pershey is an Associate Minister at First Congregational Church in Western Springs, Illinois. She recalls the day she was admitted to a maternity ward to give birth to her first child. “By the time . . . I was lashed to a bed with an IV line, my labor had progressed. With each contraction I felt as though the pain would suffocate me. When the nurse suggested she should call the anesthesiologist, I reluctantly agreed.”

“I hadn’t wanted to have an epidural,” she continued. “I wanted to have a natural childbirth and, what’s more, to have a spiritual experience. (But) by the time the anesthesiologist arrived, I was whimpering for relief.”

“The epidural numbed only the right side of my body, leaving me with half the pain still at full strength. In the last moments of my labor I was groaning groans of biblical proportions. Then a baby girl was born, and the excruciating pain ended.” (“Reflections on the Lectionary, Sunday, May 27 – Romans 8:22-27,” Christian Century, May 16, 2012, page 21)

She likens her experience to our reading from The Letter of Paul to the Romans. “The pain gets real in Paul’s letter,” she writes. “Imagine the entire creation experiencing the peak of labor’s agony – it’s overwhelming, almost unthinkable. And yet Paul’s metaphor is frighteningly true.”

Pershey observes, “The pain of childbirth is meaningful because new life emerges through pain.” (Op. cit.) The birth of the church in the first century came with its share of pain and suffering.

The disciples as well as members of Jesus’ family and others were filled with sadness and fear, uncertain about the future. Jesus was gone and it seemed all was lost and they might eventually all go their separate ways.
The Gospel According to John opens with the affirmation that Jesus is the Son of God; that in him, God has come to dwell among humankind. At the outset we are made aware by John the Baptizer that the Spirit of God came down from heaven as a dove and remained with Jesus.
While John makes known to those around him that he came to baptize with water, Jesus is the one who will come to baptize with the Spirit.

Soon after Jesus calls Andrew, Simon Peter, Philip, Nathanael, and others to follow him, he went down to Capernaum with them and with his mother and brothers. When it was time for the celebration of the Passover, he went to the Temple in Jerusalem. It was while he was at the Temple that he became enraged by the moneychangers and overturned their tables. (John 2:12-16)

Those in the Temple demanded of him, “What miraculous sign can you show us to prove your authority to do all this?” Jesus answered them, “Destroy this temple, and I will raise it again in three days.”

Someone in the crowd asks with incredulity, “It has taken forty-six years to build this temple, and you are going to raise it in three days?”

There is no indication that Jesus responded to the question that was raised but the writer of John explains, “The temple (Jesus) had spoken of was his body. After he was raised from the dead, his disciples recalled what he had said.” (John 2:18-22)

In our reading from The Gospel According to John this morning, Jesus makes evident to the disciples that the time of his death is near. Another Passover is approaching and they must soon be on their way to Jerusalem.

The disciples are filled with sorrow at the news of what is to come. But Jesus seeks to reassure them by saying, “It is to your advantage that I go away, for if I do not go away, the (Spirit) will not come to you; but if I go, I will send (the Spirit) to you.” (John 16:7) He seeks to reassure them that their sorrow will, in time, turn into joy.

But if we acknowledge the observation made by the writer of The Gospel According to John that Jesus was speaking not about the structure of the Temple but of his own body, then we understand that the church that was born on the first day of Pentecost was not identified with the building where the people had gathered, but with the people themselves.

The church was and is embodied in people. The church then and now is not made out of brick and mortar. It is instead made out of flesh and blood and each person is given his or her own breath and life through the presence of the Spirit.

Pershey recalls being drawn to a painting in an exhibition at the Loyola University Museum of Art in Chicago last summer. “I was struck by Janet McKenzie’s painting Mary with the Midwives. [photo of the painting, above] Mary is in the middle of a labor contraction. I imagined that the two women kneeling by her side were whispering the affirmation in the childbirth manual Birthing from Within: “Labor is hard work, it hurts, and you can do it.”

She notices that a dove rests upon the halo surrounding Mary and then it dawned on her that there were not two but three midwives in the painting. One of them – the Spirit - intercedes with signs too deep for words: for Mary, for herself, for all of us.

The Spirit is with us and so we give thanks to God for the Spirit’s presence and power in our lives and in our world. Thanks be to God.