"You will receive power ... you will be my witnesses"

As our Easter season comes to an end today, our reading from The Gospel According to John includes a portion of Jesus’ farewell prayer for his disciples. It is a prayer that precedes his arrest in the Garden of Gethsemane and underscores his deep, deep, deep aloha for his disciples.

But more importantly we come to understand that “God’s purpose extends beyond Jesus to the church as those whom God has given to Jesus.” (John 6:36-40, 65; 17:2) (Preaching Through the Christian Year A, Craddock, Hayes, Holladay& Tucker, Trinity International Press, Harrisburg, Pennsylvania, 1992, page 291) Jesus acknowledges in his prayer that the apostles were given to him by God (John 17:6); and that he turned them the word of God (John 17:6-8); and that they received, believed and kept that word (John 17:6-8). (Op. cit.)

Unlike Jesus’ farewell prayer which occurs prior to his trial, crucifixion and death, our reading from The Acts of the Apostles follows his resurrection. The disciples - now including Peter, John, Andrew, Philip, Bartholomew, Matthew, James the son of Alphaeus, Simon the Zealot, and Judas the son of James – gather in Jerusalem to wait and to pray as they consider what lay ahead.

Jesus is no longer with them and soon within the week there will be a remarkable occurrence that will give birth to the early church. Biblical scholars say that the eleven disciples who were once followers of Jesus now become apostles. While as disciples they were students learning from a teacher – in this case from Jesus – they were now apostles who would be sent out to deliver those teachings to others.

As apostles, they will form the nucleus of the early church, but not before Matthias is chosen to replace Judas and to reconstitute the twelve as representatives of the tribes of Israel. But the nucleus also includes Mary, Jesus’ mother, as well as other certain women and his brothers. “All these were constantly devoting themselves to prayer” (Acts 1:14) and in their devotion to prayer, we are made aware that the stage is set for the dramatic outpouring of the Spirit that is to come. (Acts 2:1-4) (Ibid., page 288)

I would like to believe that when Jesus prayed for the disciples who were now apostles as well as for Mary, the other women and his brothers that he was also praying for us. As his disciples, I would like to believe that the words God gave to Jesus, he has also given to us through our kūpuna, our ancestors and that we have received them and know in truth that Jesus came from God and that we believe God sent him. (John 17:8)

The Rev. Rick Mixon is a colleague and friend. He is an American Baptist pastor. We were classmates in seminary over 40 years ago. About twenty-five years ago, Rick wrote a pastoral essay on our reading from The Acts of the Apostles.

In his essay he asked, “What lay ahead for those who gathered in Jerusalem that day centuries ago?” He noted that Peter, John, James, Mary and the others “had anticipated the kingdom of Israel (would be) restored in all its ancient power and glory, but Jesus kept talking about the kingdom of God. Apparently they were not the same thing.” (Feasting on the Word, Year A, Volume 2, Westminster/John Knox Press, Louisville, Kentucky, 2010, page522)

He goes on to point, “Jesus spent his . . . time with them (after the resurrection) reinforcing all he had tried to teach them about the reign of God. No, it would not be like the return of the glorious old Davidic kingdom for which they longed. Jesus would not fulfill their rapidly disappearing hope of driving out the Romans, doing in the religious authorities, overthrowing the rich and powerful, and putting them in those places instead. The reign of God would, however, come riding on their shoulders, through the work of their hands, following the journeys of their feet.” (Op. cit.)

What lay ahead for us as we gather here in Mākena this morning? The reign of God will not be like the return to the glorious old America for which many seem to long. It will not be like the desire of many to drive out Mexicans and Muslims. Instead, our proclamation will be the good news of God’s aloha for the world – for every race, tongue and nation and for all of creation.

The reign of God will be ushered in through the work of our hands and the journeys of our feet. It will be our kuleana, our responsibility to be a just, loving and compassionate people. 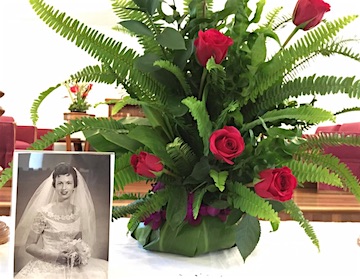 Such love and compassionate was evident here yesterday. Twelve us gathered to remember and celebrate the life of Marilyn Maddux. Marilyn was born on April 20, 1933 in Raytown, Missouri. She died on Saturday, April 15, 2017 in Wailuku, Maui just five days shy of her 84th birthday.

Wayne, her husband of 50 years, died on January 7, 2015. They both outlived their families, neighbors and many, many friends. We had become their family. I realized as we shared our stories about Marilyn that God’s reign of love and compassion came through the work of our hands and the journeys of our feet. Earlene Cummings, one of our deacons, remembered taking Communion to Marilyn the week before she died.

“By that time,” Earlene said, “Marilyn was not able to eat or drink and so she was not able to receive the Communion wafer or the cup. I sat with her and held her hands and said a prayer.”

Marilyn died less than a week later on Holy Saturday, the day before Easter and in her dying she reminded us of the hope that is ours because of our Easter faith. For Marilyn and all of us the promise of the resurrection is the hope to which we hold fast.

It is a hope that is sustained by the outpouring of the Holy Spirit on the day of Pentecost centuries ago, a day that we will remember and celebrate next Sunday. Mahalo ke Akua.