Sunday, May 29, 2016
Second Sunday After Pentecost

The Associated Press reported this week that “more than 4,000 would-be refugees were rescued at sea Thursday in one of the busiest days of the Mediterranean migrant crisis, and at least 20 died trying to reach Europe as Libyan-based smugglers took advantage of calmer seas to send desperate migrants north.” (The Maui News, Friday, May 27, 2016) The Italian coast guard coordinated 22 separate rescue operations.

The death toll over the last week is likely to rise as a result of two boats that overturned along the Libyan coast. Only four bodies have been found so far.

The massive migration of people is likely to continue for some time to come and so is the heated debate and rhetoric in countries throughout the world including in the U.S. - controlling our borders, closing our borders; erecting barriers of barbed wire fences and concrete walls; putting “them” in detention centers and refugee camps or “shipping them back to where they came from”; labeling others as undesirable based on their race, gender or religion - have all permeated the debate.

I imagine many of us try to avoid becoming embroiled in the debate. Sadly, our inclination is to dismiss one another’s points of view as political and therefore of no value to us as a people of faith.

But our readings from The First Book of Kings and the Gospel According to Luke remind us that God’s aloha reaches beyond the boundaries of nations and cultures. (Preaching Through the Christian Year C, Craddock, Hayes, Holladay & Tucker, Trinity Press International, Harrisburg, Pennsylvania, 1994, page 287) Like the stories of Paul and Silas’ encounters with the merchant Lydia and the unnamed slave girl and unnamed jailer in Macedonia and with the crowd gathered in Jerusalem on that first Pentecost that I’ve shared with throughout the month of May, the story of the unnamed centurion is another case in point. 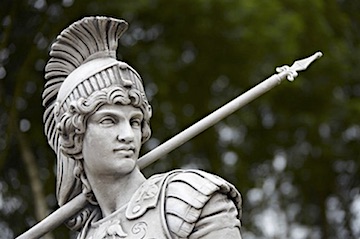 The centurion was a Roman military officer. He represented someone who was a Gentile who believed in and worshiped Israel’s God but who had not submitted to the rites whereby a Gentile became a Jew. (Ibid., page 290)

Luke’s account of the centurion finds its parallel in another story recorded in The Acts of the Apostles. “In Caesarea there was a man named Cornelius, a centurion of the Italian Cohort, as it was called. He was a devout man who feared God with allof his household; he gave alms generously to the people and prayed constantly to God.” (Acts 10:1-2)

The story of unnamed centurion therefore “not only foreshadows the mission to the Gentiles that unfolds in Acts [following the day of Pentecost], but also provides a “precedent for that mission from the ministry of Jesus himself.” (Op. cit.) What is striking to me about the story of the centurion is that he was a foreigner.

How was it that a Roman military officer and Jewish elders would have anything to do with each other? In our day and time, a centurion slave owner would not be someone we would exactly hold up with any high regard.

Yet “Luke paints a favorable portrait of the centurion. He is deeply concerned for his ailing slave and believes Jesus can heal him. However, rather than approach Jesus directly, the centurion sends two sets of intermediaries.” (Op. cit.)

First, Jewish elders are sent to appeal to Jesus. In their appeal they insist that the centurion is worthy of Jesus’ response. They tell Jesus that the centurion “loves our people” (Luke 7:5) and that he was the one who built their synagogue for them.

Second, the centurion also sends his friends as Jesus draws near to his home. They are instructed to tell Jesus that the centurion regarded himself as not worthy to have Jesus’ come into his home. His friends tell Jesus, the centurion is convinced that all Jesus needs to do is “speak the word, “ and his servant would be healed. (Luke 7:7) As a soldier, he knew the authority of a command given and received.

I am very certain that none of the social and political realities and tensions of the day are lost on Jesus - Romans and Jews, slave and free, soldiers and civilians. Amazed by the faith of the centurion, Jesus speaks and the slave is healed.

The question may be asked: What compelled Luke to include the story of the Roman centurion in his account of Jesus’ life? Some say that as a historian Luke was forced to recognize the shift in the early church from a Jewish to a Gentile majority. For Luke, then, the good news of the God’s love for the world reached beyond boundaries and cultures.

As we continue through this season of Pentecost we are made aware of the glory of God’s marvelous works among all peoples and that it is one that is to be declared to all the nations. (Psalm 96:3) We may assume that given the great commission recorded in the Gospel According to Matthew that we are to go out into the all the world to proclaim the good news of Jesus Christ to all the nations. (Psalm 96:3; Matthew 28:19-20)

But what happens if the nations come to us? That is a prospect that Solomon faced centuries earlier when the temple in Jerusalem was dedicated. “ ... when a foreigner, who is not of your people Israel, comes from a distant land because of your name – for they shall hear of your great name, your mighty hand and your outstretched arm – when a foreigner comes and prays toward this house then hear in heaven your dwelling place, and do according to all that the foreigner calls to you ... ” (1 Kings 8:41-43a)

Let us pray: We are like foreigners, O God, who have come from a distant land because of your great name, because of your mighty hand, your outstretched arm. Enfold us now into your care, O God, not as strangers, not as refugees or immigrants or migrants, but as your beloved children. Amen.