"Speaking about God’s deeds of power"

Hōkūle‘a, the Hawaiian double-hulled canoe that was first launched in 1976, is on her way home to Hawai‘i following a three-year Mālama Honua Worldwide Voyage. She is scheduled to conclude her sail on Saturday, June 17, 2017 as she makes landfall at Ala Moana Beach on the south shore of O‘ahu after sailing nearly 40,000 nautical miles since her departure on May 30, 2014. 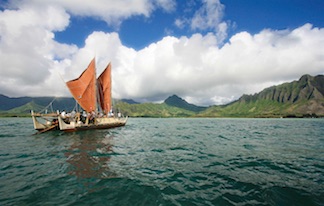 On the day of her departure in 2014, the canoe headed across the South Pacific to Rapa Nui and then to Aotearoa, Samoa, Australia and Indonesia and through the Indian Ocean to Mauritius and to South Africa. Then she crossed the Atlantic making stops in Brazil, Panama, Cuba, the U.S. Virgin Islands and the British Virgin Islands. She was two-thirds of the way through her voyage when she made her way up the Potomac River to Washington D.C. It was there that she would deliver a message calculated, not surprisingly, for a political audience.

Nainoa Thompson, the first Native Hawaiian that was trained by Mau Piailug from Micronesia to become a master navigator said, “Not everyone believes in climate change, but we do. We’re islanders; we see it. We come from small islands in the Pacific . . . we are the ones who will suffer the most, first.”

Mālama Honua - “to care for our Island Earth” - was the message they carried. But the deeper meaning was “to take care of everything that makes up our world: People, land, oceans, living beings . . . It means learning from the Pacific Island tradition of taking care of limited resources as though one is living on a canoe in the open ocean. On a canoe, water, food, plants and other basic needs are in limited supply and tended to with great care.” (“Hōkūle‘a, The Hawaiian Canoe Travelling the Word By A Map of The Stars, “ Sara Kēhaulani Goo, National Public Radio, May 27, 2016)

The Hōkūle‘a was greeted by first-nation people and others who felt there was a need to address the impact of climate change and to keep the oceans clean. While on the East Coast, she made stops in Florida, South Carolina, North Carolina, Virginia, Rhode Island, New York, Massachusetts, Maine and New Hampshire as well as Nova Scotia.

Her maiden voyage across the open ocean of the Pacific in 1976 was to Tahiti. When she arrived, she was greeted by a crowd of 17,000 who walked into the water with their clothes on to see her; to touch her ... ” (Op. cit.)

When she arrived in Alexandria, Virginia in May of last year, visitors waited as long as an hour for the chance to step onboard and touch her. Why were so many drawn to her?

More than 250 people were trained to be crew members. Crew changes occurred each month and each crew member became aware that many were drawn to the canoe because her history. But more importantly, the crew members agreed that it was, it is “her mana, or spirit” that brought people out to see her and to greet her at each port.

While the native language of each nation varied, many understood the message of the Hōkūle‘a – that it was, it is critical for human beings to live sustainably on the earth and to take care of the oceans. All told the Hōkūle‘a visited over 18 countries and 150 ports.

It may seem like a stretch to the Western mind to assert that a canoe could be imbued with a spirit that could transcend language. But perhaps that is the great gift of the Hōkūle‘a to us and to the world.

When the disciples gathered in Jerusalem to celebrate the feast of Pentecost (Acts 20:16; 1 Corinthians 16:8) following the death and resurrection of Jesus, the disciples locked themselves away. “The pain of Jesus’ leaving, and maybe the fear of what they’d risked by loving him, had reached a threshold. They didn’t know how to leave the isolation of that locked room.” (“Living the Word,” Anne H.K. Apple, Christian Century, May 10, 2017, page 25) Amid their despair and fear, something remarkable happened.

Today is Pentecost Sunday. We conclude the Easter Season on this day because the resurrection of Jesus has its promise fulfilled in the giving of the Holy Spirit to the church that embodied in the early disciples. (Preaching Through the Christian Year A, Craddock, Hayes, Holladay & Tucker, Trinity Press International, Harrisburg, Pennsylvania, 1992, page 293) The celebration of Pentecost as a Christian feast day is reflected in our reading from The Acts of the Apostles.

Today, we recall the powerful image of the Holy Spirit coming upon the disciples like the sound of rushing wind and the appearance of tongues like fire. As the disciples wait, “they experience a shattering noise that is accompanied by a spectacular vision.” (Op. cit., page 294) By the time this event occurred, Pentecost had already been observed for generations as the anniversary of the giving of the law on Mt. Sinai. (Exodus 19:16-24) The imagery of deafening sounds and dazzling lights was used in the Old Testament to dramatize a moment of divine revelation. (Judges 5:4-5; Psalm 18:7-15; 29:3-9; 1 Kings 19:11-13)

It was no different on the day of the disciples huddled in that room in Jerusalem. What happened to disciples was nothing short of that dramatic moment when God’s Spirit was manifested in “the rush of a violent wind.” The moment is made even more remarkable when we come to realize that the Spirit came to “devout Jews from every nation under heaven living in Jerusalem.” (Acts 2:5)

While many were bewildered because they heard others speaking in their own native language, (Acts 2: 6), the signs all pointed to the fulfillment of what was spoken by the prophet Joel. God’s Spirit would be poured out on all flesh, Jews and Gentiles, male or female, young and old.

In the light of those who see power and might in weapons and wealth, Kahu Danette Kong, a retired hospital chaplain and member of our church family, recently shared a wider vision. “I am reminded,” she said, “of how the first Christians came from different backgrounds, cultures and language groups. Yet, in one explosive moment, the Holy Spirit enveloped them with power, provided them with the ability to communicate with each other, and gave them a unity of purpose.”

The worldwide voyage of the Hōkūleʻa may not have been as explosive, but over the course of three years, the more 250 men and women who served as her crew on a monthly rotation, the message of mālama honua to the world was clear. In a sense, I believe their message was a fulfillment of the words of the prophet Joel: “ . . . your sons and daughters shall prophesy, and your young men shall see visions and your old men shall dream dreams” and the least among you will also prophesy.

The visions and dreams will be of a world where there are no borders, no walls, no war, no terror, no fear, no hatred, no anger, no bitterness. “Ah, but such visions, such dreams are wishful thinking,” you say.

Others say, “The desire to be number one in anything is the way of the world. That is what we aspire to. As a nation, we must insist ʻAmerica first.’”

But Jesus offers us words of caution in the parable of the rich young man. “If you wish to be perfect, go, sell your possessions, and give the money to the poor, and you will have treasure in heaven; then come, follow me.” (Matthew 19:21) If we were truthful with ourselves, we would rather choose to be imperfect.

The power of the Spirit bursts forth not in wishful thinking but in hopeful visions and dreams. The power of the Spirit will enable us to speak - as did those on the first Pentecost centuries ago about God’s deeds of power and of how a double-hulled canoe with a crew of twelve went forth into the world with a message of aloha, a world that God so loved and for which Jesus died. Mālama honua! Eō!