I met a traveller from an antique land
Who said: “Two vast and trunkless legs of stone
Stand in the desert. Near them on the sand,
Half sunk, a shattered visage lies, whose frown
And wrinkled lip and sneer of cold command
Tell that its sculptor well those passions read
Which yet survive, stamped on these lifeless things,
The hand that mocked them and the heart that fed.
And on the pedestal these words appear:
ʻMy name is Ozymandias, King of Kings:
Look on my works, ye mighty, and despair!’
Nothing beside remains. Round the decay
Of that colossal wreck, boundless and bare,
The lone and level sands stretch far away.”

Ozymandias is a sonnet that was written by the poet Percy Shelley in 1817 at the age of 25. He died five years later in 1822. 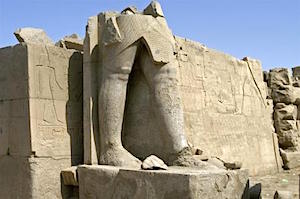 It has been said that the sonnet is probably Shelley’s most famous and most anthologized poem. Even as a high school student when the lyrics of a Beatles song were more familiar to me than the writings of the poets of the English Romantic period of literature, Shelley’s sonnet caught my attention and imagination.

The sonnet is framed as a story told to the speaker by “a traveler from an antique land.” That framing of the story enabled Shelley to add “a level of obscurity to Ozymandias’s position with regard to the reader – rather than seeing the statue with our own eyes, so to speak, we hear about it from someone who heard about it from someone who has seen it.” [Source for quote: SparkNotes].

The sonnet provides us with a metaphor for the transitory nature of political power and may be a helpful lesson for all of us to heed as we enter the 58th quadrennial U.S. presidential elections of 2016. But Ozymandias symbolizes not only political power. It has been said that “the statue can be a metaphor for the pride and hubris of all of humanity, in all of its manifestations” (Op. cit.).

I do not know if Shelley was acquainted with the Books of Samuel that are a part of the Hebrew Bible or Old Testament that constituted the theological history of ancient Israel. If he was familiar with our reading from the First Book of Samuel this morning, he would have found a kindred spirit in Samuel’s profound displeasure when the people said to him, “Give us a king to govern us” (1 Samuel 8:6).

In our reading we learn that the prophet Samuel has retired. He has served as Israel’s judge – holding the highest authority in a nation loosely governed by the elders of various tribes. He has mediated God’s leadership over the people.

The elders come to him and make a demand, “You are old and your sons do not follow in your ways; appoint for us, then, a king to govern us, like other nations” (1 Samuel 8:4-5). Samuel reacts to their demand with displeasure and turns to God in prayer.

It becomes clear in his conversation with God that Samuel feels he is being rejected by the people. He is no longer God’s mediator or representative.

But God says to Samuel, “Listen to the voice of the people in all that they say to you; for they have not rejected you, but they have rejected me . . . ” (1 Samuel 8:7) Samuel is instructed to warn the people and show them the “ways of the king who shall reign over them” (1 Samuel 8:9).

He is told to deliver a lengthy warning on the consequences of relying only upon human power. What is evident in the warning is that, unlike God, earthly kings will exploit the people and rule with brutality. The kings will take the best of all of the resources – people, flocks, harvests and the land. Samuel’s word of warning goes unheeded by the elders.

A reluctant Samuel eventually anoints Saul as king. We are left with the uneasy reality of a God who goes along with the demands of the elders and the people even though God is aware that it will not be in their best interest.

Eventually, Samuel’s words of warning come to fruition. Saul defeats the enemies of Israel, but sins against God.

Samuel is told to anoint David of Bethlehem as king. Saul’s own son Jonathan recognizes David as the rightful king.

Saul plots David’s death, but David flees into the wilderness. He becomes a champion of the people. He joins the Philistines and in time Saul and Jonathan are killed in battle.

The elders of the Southern Kingdom of Judah anoint David as king, but in the north Saul’s son Ishbaal rules over the northern tribes of Israel. In time David defeats the enemies of Northern Kingdom of Israel slaughtering the Philistines, Moabites, Edomites, Syrians and Arameans.

He commits adultery with Bathsheba and plots the death of her husband. Disasters follow. One of his sons rapes one of his daughters, another son kills the first, his favorite son rebels and is killed. There are only two contenders to the throne and one of them is Bathsheba’s son Solomon. As David lies dying, Bathsheba and the prophet Nathan ensure that Solomon will become king.

We may be inclined to conclude from our reading of Samuel and Shelley’s sonnet that all political power is always tyrannical. Whether or not we feel compelled to critique the short-lived political rule of kings, prime ministers, yes – presidents and even dictators, the writer of Samuel and the poet Shelley provide us with a deeper cautionary tale.

We see in Ozymandias and in Saul a level of excessive pride and arrogance that we see in others and in ourselves. God said to Samuel, “Just as they have done to me, from the day I brought them out of Egypt to this day, forsaking me and serving other gods, so also they are doing to you” (1 Samuel 8:8).

We may be adamant in insisting that we are not like Ozymandias or Saul or David, but Shelley and Samuel remind us that we do not need to be kings, prime ministers, presidents or dictators to succumb to the temptation to forsake God’s leading and to go our own way. Samuel’s warning to the people was unequivocal, “And in that day you will cry out because of your king whom you have chosen for yourselves; but the Lord will not answer you in that day” (1 Samuel 8: 18). In other words, if we choose to go our own way and the consequences are not to our liking, why would we cry out to God for rescue and relief over something we have brought upon ourselves?

We know it is not always easy to choose to follow God’s leading (Seasons of the Spirit, SeasonsFUSION, Pentecost 2015, Wood Lake Publishing, Inc., 2014, page 46). But we also know that there are consequences to all the choices we make.

Perhaps the lesson for us this morning is not about what would make for an appropriate form of government for the people of God. Instead the lesson is about recognizing how our human struggles, limitations, sins and conflicts can overwhelm us when we choose to forsake God’s leading and choose to go our own way (Preaching Through the Christian Year B, Craddock, Hayes, Holladay & Tucker, Trinity Press International, Harrisburg, Pennsylvania, 1993, page 299).

Amid the desolation, decay and despair of Ozymandias, we give thanks to God for the abundance, new life and hope that is ours through Jesus Christ. As we gather around the table that has been set before us, we give thanks for the presence and power of the Holy Spirit in our lives and in our world.