“We Are The Body of Christ”


I lost my way several times going down hallways in opposite directions of where I wanted to be. Signs were posted everywhere but even as I followed them with great care I somehow managed to end up going in the wrong direction. Fortunately, at every turn, there was a nurse or a doctor or an intern or staff close by to help me get through what seem like a maze of hallways at the Kapʻiolani Children’s Hospital in Honolulu. 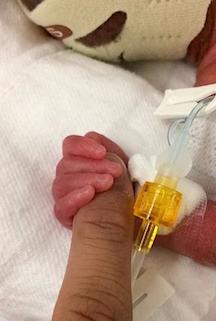 Auntie Judi Pasco of Kīhei called earlier in the week. I picked up her voice mail while on Oʻahu for the annual meeting of the member churches of the Hawaiʻi Conference of the United Church of Christ of which our church is a member. I called her back and she shared the good news that her second great-grandson was born late Wednesday afternoon to Riley Kanoa Yap and Acacia Vandaele.

Acacia was asleep when I entered her room.

She opened her eyes and smiled.

“I should be asking you that,” I replied.

“It looks like they are providing you with medication that may help,” I said pointing to a button she could press to medicate herself when needed.

“Yeah, but the morphine makes me drowsy so I haven’t been using it,” she explained.

“Auntie Judi told me baby already has a Hawaiian name,” I said. “Did you give him other names?” I asked.

“His name is Kennedy James,” she answered. “I let Kanoa decide that. We are already calling him KJ. His Hawaiian name is Kinohiokalā which means ‘the beginning of the day.’”

Acacia was certain that KJ was excited and ready to meet “his mom and dad” even if it was a little ahead of schedule. She continued, “I haven’t had a chance to see him yet. I have to wait until I get stronger,” she said, “until I am able to sit up on my own.”

“I don’t think I will be able to see him in the neonatal unit,” I said.

“No need to do that,” I responded. “I’ll check with the nurses before I leave. I am glad that you are okay and that baby is okay.”

“He is doing fine. He is on oxygen and that will help his breathing. He has all of his fingers and toes.” Then she added as she reached for her smart phone, “I have a picture of him.”

When she handed me the phone I could see four of his five very tiny fingers wrapped around one of his dad’s fingers. “Kanoa said he has a very strong grip,” she said smiling.

We talked a little more. Then I noticed her voice began to trail off.

“I will let you rest but before I go let me offer a word of blessing.”

We held hands and were silent for a moment. I offered words of thanks for KJ’s birth and prayed that Ke Akua would strengthen her and be with her and with Kanoa and the extended members of KJ’s ‘ohana.

I left her room and went to the neonatal intensive care unit. I introduced myself to the nurse and thought it may help to say that I was a reverend but that did not impress the nurse in any way. She apologized and said that visits were limited to only the parents of the babies in the unit. She explained that Acacia or Kanoa would need to be present in order for me to see KJ.

I understood and thanked her. I found my way to the elevators and made my way back to the front lobby and out the door.

The car was in a parking deck about a block and a half from the hospital. As I walked out of the front door of the lobby I could feel a breeze sweeping down through Manoa Valley and across the H1 freeway. Because of his early arrival KJ will need to be monitored over the course of the next several weeks. He must remain under the care and observation of the hospital until or near his due date in August.

But for now there was reason for us to celebrate and the breeze coming out of the valley was a powerful reminder that KJ had taken his first breath. Baby was hānau – baby was born.

Today is Pentecost Sunday. We often speak of this day as “the birthday of the church.” (Feasting on the Word, Year A, Volume 3, Bartlett & Taylor, Westminster/John Knox Press, Louisville, Kentucky, 2011, page14)

In the beginning God’s Spirit moved over the face of the waters. (Genesis 1) Through God’s life-giving breath humankind was created on the sixth day. (Genesis 2) These accounts are recorded in the first two chapters of The Book of Genesis.

Over time God’s Spirit bound together the generations that followed by bringing life out of death and hope out of despair. (Op. cit., page 16) In our reading from The Acts of the Apostles, the outpouring of the Spirit upon the disciples on that first Pentecost Sunday marked the birth of the church.

The disciples had been instructed by Jesus to wait to be “baptized with the Holy Spirit” (Acts 1:5) and to be empowered by the Spirit to be his witnesses “to the ends of the earth.” (Acts 1:8) That reliance on the power and presence of the Spirit is what strengthened and sustained the disciples in the early church and it is the power and presence of the Spirit that will strengthen and sustain us in our day and time.

We can only imagine the profound disappointment the early disciples must have felt as they struggled through the days of the trial, crucifixion, resurrection and ascension of Jesus. They had left their work and their families for three years to follow Jesus and now he was leaving them.

Then, through the miracle of the resurrection he reappears and walks with them, only to abandon them again at the ascension. There is no doubt that as they gathered and waited in Jerusalem, the disciples felt a profound sense of abandonment once again. (Op. cit., page 16)

But the Spirit came like “the rush of a violent wind, and it filled the entire house where they were sitting.” (Acts 2:2) The Spirit filled the room. The Spirit did not simply sweep through the room – in one door or window and out the other. The Spirit rested on each of the disciples.

In that moment, “the fearful disciples (were) converted to the work that God has always been doing.” Bradley Schmeling at Gloria Dei Lutheran Church in St. Paul, Minnesota points out: “This is, of course, Jesus’ work: to love as God loves, to gather and unite, to forgive and raise up . . . (the disciples) are suddenly and miraculously inspired, despite themselves, to act just like Jesus. The Spirit embodied in Jesus now fills their bodies” and they become “the body of Christ.” (Christian Century, May 28, 2014, page 21). They become the church.

What makes Pentecost significant for us today is the realization that Jesus is no longer here. There are no post-resurrection appearances. Jesus has ascended into heaven.

He is not here. He is risen. He has ascended.

In the past, he has served as pastor of Ka Hana O Ke Akua in Waiʻanae on the island of Oʻahu and at Waiola Church in Lāhainā here on Maui. On January 2nd of this year, he was called to serve as Associate Conference Minister to provide staff support to our pastors and churches on Kauaʻi and Oʻahu and to also provide support to the Stewardship Missional Team of Hawaiʻi Conference.

Beyond describing Kahu’s work and his years of service to our Hawaiian churches, I had an opportunity many years ago to work with him on a team of curriculum writers drawn from the U.S., Canada, Australia and the United Kingdom. The result of that work was the publication of Seasons of the Spirit, a lectionary-based Sunday School curriculum for children, youth and adults.

It is a curriculum used by our own Sunday School Teaching Team here at Keawalaʻi Congregational Church. I am grateful to Loretta Brem, our Sunday School Coordinator, and the members of Sunday School staff for their decision to develop our Christian education program around the Seasons of the Spirit curriculum. The work that has been done over the years has been done by many gifted teachers and writers.

In his report to the delegates attending the annual meeting in Honolulu on Friday and Saturday, Kahu Schmidt wrote the following on his work and his first few months “on-the-job”: “Each day presents opportunities to serve God, to grow in faith, and to be present . . . we seek to be the hands and feet of Jesus Christ in our world.”

His words reflect the thoughts shared by St. Teresa of Avila in the 15th century. Teresa was born in 1515 in Spain. She died in 1582.

She entered a Carmelite convent when she was eighteen, and later earned a reputation as a mystic, reformer and writer who experienced divine visions. She founded a convent, and wrote the book The Way of Perfection for the nuns of the order.

She was very aware that every Christian has a role to play in making Christ present in the world. Among the prayers attributed to her is the following:

We are the Body of Christ. We are the church and it is the Spirit that gives life and breath to our lives and to our churches. So Happy Birthday to the church here in Mākena and in every corner of the world - and a very Hauʻoli lā hānau to Kennedy James Kinohiokalā Yap, son of Riley Kanoa Yap and Acacia Vandaele of Maui.

Mahalo Ke Akua. Thanks be to God. Amen.