A character struggles with the question of faith or a belief in God. She asks, “What if God is trying to talk to us but nobody’s listening?” What makes the question particularly significant is it points to the difficulty we face in discerning what is good and what is evil.

It was the religious leaders, the elders of Samuel’s day, who came to him to demand that he appoint a king to succeed him. “You are old and your sons do not follow in your ways. “Appoint for us then, a king to govern us, like other nations.” (1 Samuel 8:5) 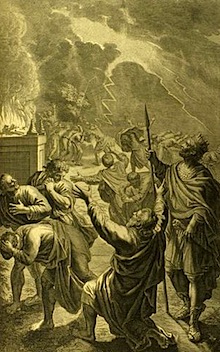 Samuel prayed to the Lord. He talked to God. And the Lord said to Samuel, “Listen to the voice of the people in all that they say to you; for they have not rejected you, but they have rejected me from being king over them. Just as they have done to me, from the day I brought them up out of Egypt to this day, forsaking me and serving other gods so also they are doing to you.” (1 Samuel 8:7-8)

Then God said to Samuel, “Now then, listen to their voice - only you shall solemnly warn them and show them the ways of the king who shall reign over them.” (1 Samuel 8:9) So Samuel reported all the words of the Lord to the people who were asking him for a king.

He warned them that the king would take their sons into military servitude; he would take all of their property and put them to his work. He would take the best of their fields and flocks. They would all become his slaves.

But the people refused to listen to Samuel. “No!” they said, “We are determined to have a king over us, so that we may be like other nations, and that our king may govern us and go out before us and fight our battles.” (1 Samuel 8:19)

Wendy Farley, Professor of Religion at Emory University in Atlanta, Georgia writes of our reading from The Gospel According to Mark, “What the passage seems to say is that (the) discernment (between good and evil) is not easy and that we often are siding with Satan when we think we are being faithful to God.” (Feasting on the Word, Year B, Volume 3, Bartlett & Taylor, Westminster/John Knox Press, Louisville, Kentucky, 2009, page 116)

At the end of a long day Jesus attempts to sit down to eat but a crowd of people desperate to get close to him makes it impossible. They have heard that Jesus possesses power over sickness and demons.

Jesus’ family comes after him to bring him home after hearing others say, “He’s crazy. He’s nuts. He has gone out of his mind.” (Mark 3:21)

The scribes from Jerusalem are also after him convinced that he is evil. Jesus responds to their accusations with a stunning rejection of the scribes in very strong terms. After doing so those in the crowd that had gathered around him relay a message to him: “Your ‘ohana is outside. Your mother and your brothers and sisters are here.”

Jesus responds with an equally stunning and troubling rejection: “They are not my family.”

Farley observes, “It is easy (for us) to identify with the family and with the scribes.” (Ibid., page 118) After all, she notes, we value what we call strong traditional families based on our understanding of the Bible. We also value our kahu or pastors and the leadership in our churches.

She adds, “If we are preaching in a church or sitting on committees, choosing hymns, organizing Sunday school and potlucks we are a part of the church authority.” (Op. cit.) We usually put Christ at the base of these structures and use his authority to bolster what we say and do.

But Farley contends that the story from our reading “demands a different perspective, because it is these very people that are condemned for failing to recognize who Jesus is.” (Op. cit.) The scribes whom Jesus condemns are not evil. As religious leaders the scribes value the significance of bonds of family whether by blood or by faith.

However, Jesus’ ministry is about much more. It is about being open to everyone: Jews, Gentiles, the poor, the sick, the mentally ill, women, the working poor, tax collectors and sexual outcasts. The only ones who seem to get him upset are his family and the faithful scribes.

Those closest to him – his family – and those like the scribes who share a faith in God are the ones who are farthest from him. They are unable to be open to everyone.

For his family and for the scribes such openness feels like Jesus has lost his mind. It is a difficult passage for us because it requires that we come to terms with understanding how we are to discern the evil we attribute to Satan and the good we attribute to the Holy Spirit. The reading provides us with little in way of how we do that but Farley suggests that we will find our way by looking more closely at the series of healings that Jesus performs, the hostility it generates, and his anger and frustration over the hostility.

If we were to take the story of Jesus’ encounter that day with the scribes and with his family and apply its significance to our lives today, we would do well to find ourselves surrounded by folks similar to those who had come to Jesus for healing. When we think about those who were near Jesus, they were far from perfect.

A young man with a history of substance abuse asked me recently to pray for him.

“The kind told me you one pastor. I just got saved,” he said with enthusiasm. “Can you pray for me?”

When I asked him what he wanted me to pray about he answered, “Oh, my finances. I need one job. I like one girl friend.” Then he added, “To keep the ‘enemy’ away, you know Satan.”

He started coughing and wheezing. “Are you sick?” I asked, wondering if we would want to include healing in our prayer. “Oh, I get asthma,” he said as he took out a cigarette to smoke.

“Eh, brah, you get asthma and you smoking. If you like healing, you gotta do your share. No can ask God for something if you not helping yourself.”

He smiled aware that he had some responsibility for his condition. After the prayer was offered, I asked where he was headed that early in the morning.

“I going McDonald’s. I beg for money so I can eat. They get the dollar menu so I no need that much.”

“Here,” I said as I handed over five dollars to him.

A few days later he stopped by my home to ask for spare change. I gave him four dollars in quarters. I saw him the other day and he asked a third time, “Eh, you get money for lend me again?”

“Oh!” I said. I was out walking my dog and needed to continue.

He smiled, “You too.” I watched him as he crossed the street and headed over to McDonald’s.

It has been a few days since we last saw each other. I am not certain if I am encouraging him in his faith or enabling him to continue to be dependent on others but I do know that there is a part of him that is desperate and aching to be near Jesus.

Farley reminds us of what we already know. “We live in troubled times and try our best to figure out how to be faithful. The Holy Spirit is wild and disturbing and comes to us in unfamiliar forms.” Often the Spirit comes to us through those who are set on the margins of society whether by gender, race, religion, social class, lifestyle, or sexual orientation.

If we are to be faithful disciples of Jesus Christ, we may do well to remind ourselves of the series of healings that come to us in our reading this morning. It was the desire for healing that drew so many to Jesus and I believe it was the desire for healing that drew a young man to Jesus as well. I agree with Farley when she concludes, “Perhaps if we had compassion for our own wounds and the wounds of others, we might find ourselves in the crowd devoted to Jesus, instead of in the ‘legitimate’ family Jesus rejects.” (Op. cit., page 120) We will understand more fully what Jesus meant when he said, “Whoever does the will of God is my brother and sister and mother.” (Mark 20:35) Amen.