Before leaving Maui on Wednesday morning for a meeting in Honolulu, I received an email letting me know that the Rev. Susumu Yamane was recently admitted into the Hospice facility at Palolo Chinese Home for the elderly on the island of O‘ahu. Sensei was my kahu or pastor when I was a student at the University of Hawai‘i in Hilo. 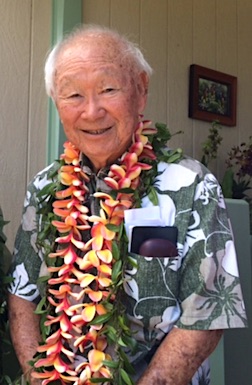 I shared with you last Sunday that he was my mentor. Sensei was the senior pastor at Church of the Holy Cross, a church that was first established as an outreach to Japanese immigrants who came as indentured workers for the sugar plantations of Hilo and the surrounding communities. I served as the youth leader for junior and senior high school youth for three years.

After I completed my studies at the university with Bachelors’ degrees in English and Sociology, he asked what I was planning to do after graduation. I said I was thinking about attending law school.

He asked if I would consider going to seminary as an option. I had never thought about that but as I looked back on my life, it seemed I was always involved in “church” and in a way, his question made sense.

After we talked a bit more, he suggested I consider Chicago Theological Seminary, the seminary he attended. My immediate response was Chicago was too far away and I did not enjoy cold weather even if it was only seasonal.

That, in large part, is how I ended up at Pacific School of Religion in Berkeley, California. At the time I didn’t realize I was trading cold weather for earthquakes. But wherever I may have gone, Sensei Yamane is the reason that I have spent over forty years of my adult life in the Christian ministry – 10 years as a layperson and 30 years as an ordained minister.

A couple of people at the meeting gave me directions to the Palolo Chinese Home in Kaimuki early on Thursday afternoon. I was on O’ahu with Auntie Edie Kapiko and Bob Hobson for the ‘Aha Pae’aina or annual meeting of the Hawai’i Conference of the United Church of Christ. A total of 135 delegates from 65 member churches, including our own church here in Mākena, were in Honolulu for the gathering.

When I entered the room I saw someone that I did not immediately recognize. I looked for family photographs. There were none. I looked for some identification – a wrist band or a medical chart on the wall with his name. There was nothing.

But with each passing moment, I began to recognize him. His face was gaunt. His skin had lost the color that comes from the Hawaiian sun.

He looked different. He had lost a lot of weight. But it was him.

He opened his left eye and turned to look at me over his right shoulder. I realized in that moment that he did not immediately recognize me.

“Do you remember me?” I asked.

At first he looked puzzled. I worried. If he did not recognize me, would my presence cause him to become unsettled?

His forehead wrinkled a bit. “You look different,” he said and then he added, “You put on some weight.”

“Yes, I did.” I replied smiling realizing that with the passing of time his weight loss and my weight gain made us unrecognizable to each other.

“I came to see you,” I said as I reached out to hold his hand.

He closed his eyes and drifted away.

We did not speak much. Whenever I said something it seemed to startle him. His eyelids would flutter, then open, then close.

“How are you feeling?” I asked.

“I have a headache,” he replied.

“Do you want take some medication?”

Before he could reply, his eyes closed again and he drifted away a second time.

After a few minutes passed, I asked if he wanted to have something to drink and he said “Yes.”

There were two cups, both with straws near his bedside. I picked up one of the cups. He placed the straw in his mouth and managed to take several gulps.

When he opened his eyes again he said, “I need to sleep.”

“Thank you,” he replied.

“I love you,” I said as I left his bedside. Within a second he closed his eyes and drifted off to sleep.

It was during the quiet moments of our visit that I thought about his wife and his two daughters and son whom I had come to know when we all lived in Hilo. They were his ‘ohana, his biological family.

But I also felt that Sensei and I were family to each other, not by blood, but through the lifelong commitment we had both made to do “the will of God” - as we were best able to discern what that was for ourselves. Our reading from The Gospel According to Mark touches upon this understanding in a radical way.

Why does the writer of Mark divide the account about Jesus’ family by setting within it the accusation of the scribes that Jesus was performing Satanic exorcisms? One possibility is Mark may have joined the stories together because the family’s view of Jesus and the scribes’ view of Jesus may not have been all that different, although one was more serious than the other. They both want Jesus to stop what he is doing.

On the one hand, the family concludes that Jesus has gone insane, that he has simply lost his mind (Mark 3:21) – calling men to leave their families to follow him; roaming about the countryside healing people; calling attention to himself by spending time with the unlikeliest of people.

Jesus’ family was concerned about his safety but more especially for their own well-being. When they heard what he was doing they went to restrain him.

The scribes, on the other hand, interpreted his behavior not in psychological terms but in theological terms. Unable to contain the growing number of people who sought Jesus out so that he might heal them, the scribes insisted that he was possessed by demons (Mark 3:22). “He has an unclean spirit,” they said (Mark 3:30) and for that reason they conspired to destroy him.

The scribes were more concerned about their preserving their power than they were about the power to heal broken lives. But whether or not Jesus was intolerant of his family or the scribes he took the reality of demonic powers seriously and it is a reality we cannot ignore. The question has been asked: “Did Jesus believe that a personality like Satan actually existed? Some say it is likely he did. But whether he believed Satan was someone with horns, a red tail and a pitchfork, he did not hesitate to acknowledge the existence of demons (Mark 3:22-25).

There are forces in the world that are “actively engaged against the compassionate and reconciling love of God” (Ibid., page 117). Whether one believes “in a person named ‘Satan’ is not as important as hearing about our captivity to the powers of evil signified by ‘Satan,’ powers that continue to seek our allegiance. Such powers are evident in our world today, powers that cause us to hurt ourselves, to hurt others and to hurt God” (Op. cit.).

Some say there is the power of racism, a power that teaches us to believe that one group is superior to another because of skin color or one’s cultural heritage including language, music, art, and dance. There is the power of gender, a power that tells us to believe that men should dominate women; that education for women is forbidden; that women need to know their place. It may be a cliché but some insist, “After all, it is a man’s world.”

Others say there is the power of the material things we want to possess and consume; that money is what gives us life. And there is the belief that weapons and war will bring us security and peace, regardless of the fact that it sometimes causes us to kill one another in the name of God.

The demonic forces in our world are disguised by our fear and hatred and our resentment and anger towards others who are different. There are no pitchforks or red tails or horns. But there are brown shirts and white sheets and red guards.

Our reading from The Gospel According to Mark began with Jesus’ family and it ended with his family. Jesus insisted that his true family includes those who do God’s will (Mark 3:35).

I cannot help but think about what is going on along the border we share with Mexico as many, many, many children are being separated from their parents and detained in some facilities that look like warehouses. From October 2016 to February 2017 over 1,800 immigrant and refugee families were separated.

In May, the U.S. Attorney General announced a “zero tolerance” policy. Immigrant and refugees entering the U.S. would be criminally prosecuted. Since that announcement was made, another 658 children were separated from 638 parents from May 6 to May 19.

What are we to say of the children who are separated from their parents at the border? Should we, in the church, not be the first to say, “No!” to such separations? Or have we been held captive by those who insist that when it comes to immigrants and refugees, the law of the land is clear. “If you break the law, we will forcibly break your family apart?”

But what about those who are seeking asylum? Are they breaking any law? Would we dare say that the policy that is now in place demonstrates a callous disregard for human life that goes against the will of God?