One might conclude that our reading from The First Book of Kings contains all the elements of a script for a dramatic television mini-series - conspiracy, perjury, murder and theft. It is all there in the story. (Preaching through the Christian Year C, Craddock, Hayes, Holladay & Tucker, Trinity International Press, Harrisburg, Pennsylvania, 1994, page 299). It is epic in scope – a determined and faithful vine grower; a greedy and ineffectual king, a conniving and murderous queen; and a bold and fearless prophet. 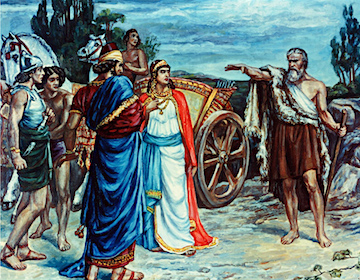 The story prepares the way for the prophet Elijah’s encounter with Ahab in the verses that follow our reading. (1 Kings 21:17-29) The story for now includes a series of episodes that point to a basic theme in prophetic literature of the Bible and that is God’s response to injustice. (Op. cit., page 300)

Naboth refuses to accept any offer and it is his refusal that sets into motion the tragic consequence that follows. But why the refusal?

One might conclude that he was going to attempt to bargain with Ahab for more money. Or that he was hoping for an exchange of more land.

Naboth does not really explain the reasons for his refusal but he does say, “The Lord forbid” that I should sell or trade this land. “This land” he tells Ahab “is my ancestral land.”

He reminds Ahab that ‘the land has been passed down through the generations” and that “the family holds the property as a gift or trust for God.” (Op. cit., page 299) According to the traditional belief among the ancient Hebrews such an “inheritance” was not “to be treated as capital investment or real estate.” (Ibid.) It was and is a “belief” or practice shared many other cultures around the world including the ancient Hawaiians.

Ahab appears to respond in a weak and almost childish way Naboth’s refusal. He does not argue with Naboth or confront him. Instead, he returns home and pouts. (1 Kings 21:4)

The scene changes. Jezebel enters the story and chides her husband for his inability and unwillingness to confront Naboth with his demand. After all she tells him, “You are the king. You hold the position of power not Naboth.”

She decides to intervene and promises to give Ahab what she does not own. Her words and actions quickly put her at odds with Israel’s understanding of the kuleana or responsibility of a king.

Jezebel’s devotion to her own faith and the religion of Baal, not Yahweh, undergirds her belief that a king has a special relationship to the gods and so he may do whatever he wishes. She conceives a plot to have Naboth accused of blasphemy against God and then put to death.

Jezebel collaborates with two men who make the false accusation that leads to what is clearly the premeditated murder of Naboth. Once Naboth is dead, she tells Ahab that the vineyard is his and so he takes formal possession of the land. (1 Kings 21:15-16) Biblical scholars contend that murder and the appropriation of a person’s “inheritance” are matters not only for human courts but violations of the will of God that require divine intervention in the form of a judgment and a punishment.

Not only will Ahab die but his entire household will die. But Ahab repents and humbles himself. His life is spared but not that of his son.

The story of Naboth’s vineyard again highlights God’s response to injustice. It is clear that Ahab and Jezebel manipulated the judicial system. There was no due process for Naboth. He was accused and murdered.

Ahab and Jezebel took more than they needed and they deprived Naboth of his rightful inheritance. Above all else, they violated the substance of justice – one which rests squarely upon God.

We may want to set ourselves apart from the Old Testament account of Naboth’s vineyard by insisting that we are New Testament Christians. Who cares about the Old Testament and its covenantal stipulations – of the laws, the commandments, or even the traditions about land tenure?

The covenantal stipulations may have been the way the ancient Hebrews showed how justice was to be established among God’s people. But that was then and this is now. Such appeals to justice are no longer applicable and should be ignored.

Ah, but how wrong we would be to dismiss such a powerful story. There are those who may decide the episodes of conspiracy, perjury, murder and theft make for good television, but that they are hardly the kinds of injustices most of us encounter in our own personal lives.

But the story of Naboth’s vineyard demands our willingness to stand with those seeking justice. A drive across Mokulēlē Highway between Haleakalā and Mauna Kahalewai reminds us of the impact sugar production has on our families and communities here on Maui.

The sugar mill at Puʻunēnē will be closing down at the end of the year. Hundreds of workers have already been affected by the announcement with layoffs occurring in incrementally over the remaining months of the year. [Editor's note: photo to the left was taken by me (Lloyd Nebres) one sunrise last year, with a raincloud above Pukalani providing a golden scrim to the sugar mill. ]

The views across freshly harvested fields along Honoapiʻilani, Kahekili and other highways crisscrossing the island reveal a vast expanse of a portion of the more than 36,000 acres of land that was cultivated for over one hundred years. The history of sugar in Hawaiʻi is a complicated one and when the mill closes down in December, it will be the end of an era.

A little over a century ago, American business interests sought to have Hawaiʻi annexed to the United States. By doing so, the sugar growers would benefit from lower tariffs on sugar being shipped into the American market.

A Committee on Safety composed of American businessmen and American missionary descendants organized themselves for the purpose of protecting the lives American citizens residing in Honolulu. Because there was a move by the government of Hawaiʻi to strengthen its Constitution to protect the sovereignty of the nation, members of the committee saw the move as a threat to their economic interests and well-being.

In time, we would come to learn that the members of the Committee on Safety conspired with American military forces to overthrow the constitutional government of Hawaiʻi. An accusation was made against Queen Liliʻuokalani that she was a pagan and therefore unfit to govern.

The committee sought and received the support of Marines on board the USS Boston that was anchored in Honolulu Harbor. The Marines came ashore and surrounded ‘Iolani Palace and placed the queen under house arrest. The year was 1893.

In the years that followed, Liliʻuokalani sought to have the nation restored. Her appeal to President Cleveland was successful. But Cleveland’s death and McKinley’s succession to the presidency came at the time when the U.S. was becoming embroiled in the Spanish-American War.

Pearl Harbor became a desirable port for warships headed to the Philippines. In time the Philippines, Puerto Rico and Hawaiʻi would all fall under U.S. influence and control.

In 1898, Hawaiʻi was annexed to the U.S. not by international treaty but by a joint resolution of the U.S. Congress. For many today what that means is Hawaiʻi never ceded its sovereignty to the United States.

A Provisional Government was established by the “Americans.” English became the language of instruction in government, education and commerce. At one point there was talk of placing Liliʻuokalani on trial for treason and if found guilty, to be sentenced to death.

If you are hearing this for the first time, you may want to dispute what I am saying and insist that that cannot be true. Some may say I am rewriting history. Some may say such talk is not Christian. Others may say history is history. What is done is done. Get over it.

Whatever you may conclude after your own reading of the history of Hawaiʻi, what makes the story of Naboth profoundly significant to me is what Liliʻuokalani wrote at the conclusion of her autobiography.

“Oh, honest Americans, as Christians hear me for my down-trodden people! Their form of government is as dear to them as yours is precious to you. Quite as warmly as you love your country, so they love theirs. With all your goodly possessions, covering a territory so immense that there yet remain parts unexplored, possessing islands that, although near at hand, had to be neutral ground in time of war, do not covet the little vineyard of Naboth’s, so far from your shores, lest the punishment of Ahab fall upon you, if not in your day, in that of your children for ‘be not deceived, God is not mocked.’”

The people to whom your fathers told of the living God, and taught to call ‘Father,’ and whom the sons now seek to despoil and destroy, are crying aloud to him in their time of trouble; and he will keep his promise, and will listen to the voices of his Hawaiian children lamenting for their homes.” (Hawaiʻi’s Story by Hawaiʻi’s Queen Liliʻuokalani, Annotated by David W. Forbes, Hui Hānai, Honolulu, 2013, pages 406-407)

The story of Naboth’s vineyard is about God’s response to injustice. It is a story that Liliʻuokalani knew well. It is a story of the faith she had come to embrace as her own.

As difficult and as painful as it was for her, it was Liliʻuokalani who opened the way for God’s redeeming power in a prayer she wrote when she was imprisoned at ʻIolani Palace. She wrote the lyrics to what we now know as “O Kou Aloha No” or “The Queen’s Prayer.” Despite the conspiracy, perjury, theft and even talk of execution, Liliʻuokalani wrote and composed a prayer for forgiveness for those who had not simply wronged her but for those whom she believed had betrayed God’s justice.

“Your love is in heaven and your truth so perfect. I live in sorrow imprisoned; you are my light, your glory my support. Behold not with malevolence the sins of humankind, but forgive an cleanse. And so, O Lord, beneath your wings be our peace forever more.”