“We Are Made in the Image of God”


I didn’t say anything about my father to the clerk at the Social Security office in Wailuku when I handed her my birth certificate. I was there last Friday to sign up for Medicare.

Kaikano Alika was listed on the birth certificate as my father. He raised me from the age of 3 until I was 14 years old but he was not my father. He was my tūtūkane or grandfather, not my biological father.

It would not be until a few years prior to my mother’s death in 1999 that I would learn the name of my biological father. I have shared the story with you in recent years of how I also learned that he moved to Maui, married and raised a family that included a son and two daughters.

I met my sister Jill and later my brother Patrick and my sister Lynn. Patrick lives in Nevada. Lynn lives in Oregon. Jill lives here on Maui.

Jill and I spent some time together earlier in the week. 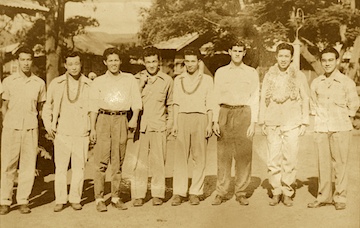 “Do you want to go and see the photo exhibit of the 100th Infantry Battalion of the 442nd Regimental Combat Team at the Nisei Veterans Memorial Center?” she asked. “The exhibit is coming to an end very soon.”
[This photo shows Tsugio Kitsuki, my dad—he's the one standing on the far right (click on image to see larger version). This photograph was taken the day my dad and those other men with him left for basic training with the 442nd. It is a black and white photo that has turned into a sepia color.]

“Sure,” I said aware that our dad had served with the 442nd during World War II.

The exhibit was set up in the Education Center. When we entered the room an attendant pointed to an arrow and said, “Just follow the other arrows around the room.” It was immediately evident that the photographs had been arranged in chronological order.

I recognized several of the photographs, having seen them over the years in books and in other exhibits. I was also familiar with many of the printed commentaries that accompanied each photograph – of the imprisonment without due process of over 120,000 Americans of Japanese ancestry, of the prejudice and racism many experienced during their incarceration and in the years following the end of the war.

Jill and I went out to dinner on Friday evening at Tokyo Tei in Wailuku. I suggested to her that we celebrate both of our birthdays – mine in June, hers in July.

We talked about our dad over dinner.

“He was shot in the leg during the war,” she said. “ He could walk but he always walked with a limp because of his injury.” Then she added, “He never talked about the war.”

“You said dad died from a stroke,” I remarked.

“He had a series of strokes,” she explained. “The last one before he died was particularly difficult.”

For a moment, I wondered if I was like my father in any way. I didn’t say anything to my sister. I carry his genes so in that sense I am like him. But beyond that I am not sure if we shared the same temperament and disposition.

I also wondered if I was like my grandfather in any way. I carry his genes through my mom so in that sense I am also like him.

Today is Trinity Sunday. In his Second Letter to the Corinthians, the Apostle Paul alludes to the Trinity when he concludes his letter with a final greeting: “The grace of the Lord Jesus Christ, the love of God, and the communion of the Holy Spirit be with you all.” (2 Corinthians 13:13). In The Gospel According to Matthew, it is Jesus who instructs the disciples: “Go therefore and make disciples of all nations, baptizing them in the name of the Father, and of the Son and of the Holy Spirit.” (Matthew 28:19)

Today is also Father’s Day. Whether we have had fathers present or absent in our lives; whether they were loving and caring or lacking in both, it can be a comforting or a challenging day for all of us. In a way, my relationship with my father and grandfather is like the Trinity – “three distinct persons, three yet one.” (Feasting on the Word, Year A, Volume 3, Bartlett & Taylor, Westminster/John Knox Press, 2011, page 30) In another way, making sense of my relationship with my father and grandfather is both a challenge and a comfort. Whatever the experiences and circumstances may have been, how do I or any of us move with our lives.

What our readings from the Bible provide us with today is an affirmation that whatever our experiences and circumstances in life, we are made in the image and likeness of God, male and female. (Genesis 1:26-27) To be made in the image (selem) and likeness of God (demut) refers to two things. First, it refers to the way in which God is made known through humankind and second, it refers to God’s care for humankind.

If we are to love God, then we must love one another and by doing so, we become an expression of God’s presence in the world. The passage from The Gospel According to Matthew includes the great commission to the early disciples to go and make disciples through baptism in the name “of the Father and of the Son and of the Holy Spirit” (Matthew 28:19) by teaching them to obey everything Jesus commanded them to do. (Matthew 28:20) That command is summed up in the great commandment – to love (God) . . . to love one’s neighbor and oneself.” (Matthew 22:37-39)