“God’s passion for justice is a powerful thing. When we try to manage things our way, to suit our own purposes, things can go horribly wrong.” (Seasons of the Spirit, Pentecost 1 2013, Wood Lake Publishing Inc., 2012, page 27) 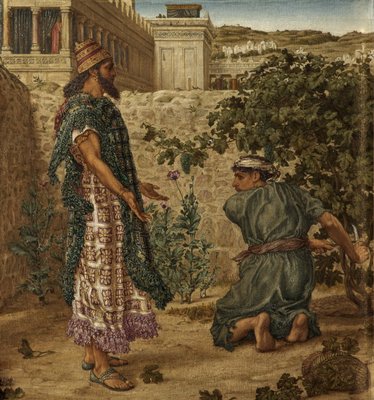 The story of Naboth’s vineyard is “about how one unjust desire, left unchecked, can take on a life of its own and the consequences can be devastating.” (Op. cit.) King Ahab wants a vineyard that belongs to Naboth. He offers Naboth what seems reasonable and fair – land of greater value, or cash.

But Ahab fails to understand, what he fails to discern is the land is not really Naboth’s to sell. The land belongs to God and more importantly it is ancestral land – land that has been entrusted into the care of his family. Ahab looks upon his offer as a business transaction but for Naboth it is land that cannot be given away or sold, regardless of the price.

When Naboth rebuffs Ahab’s offer, the king basically pouts. He goes to bed, turns his face away and refuses to eat.

His wife Queen Jezebel appears to mock him. “Do you now govern Israel? Are you not the king?”

“Get up, eat and get over it,” she insists. She then proceeds to lay a plot against Naboth, crushing him and getting Ahab the land he wanted.

From the point of view of Naboth’s family this is a tragic and unjust story. But when Elijah the prophet appears, Ahab knows that he has done wrong. Ahab wanted the land, and it was his desire that caused Jezebel to act. (1 Kings 21:17-29) The story makes clear that eventually justice will prevail. 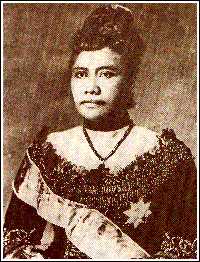 Is it any wonder then that Queen Liliʻuokalani, the last constitutional monarch of Hawaiʻi, found great comfort in the story of Naboth’s vineyard as she faced Americans who were determined to overthrow the nation of Hawaiʻi in 1893 for economic and political gain?

Like Queen Jezebel who thought nothing of the murder of Naboth, Queen Liliʻuokalani made the following determination: “To prevent the shedding of the blood of my people, natives and foreigners alike, I opposed armed interference and quietly yielded to the armed forces brought against my throne, and submitted to the arbitrament of the government of the United States the decision of my rights and those of the Hawaiian people. Since then as is well known to all, I have pursued the path of peace and diplomatic discussion and not that of internal strife.” (An Hour with the Queen: Lessons on Forgiveness and Grace, Kaleialoha & Hiwahiwa, Hagadone Printing Company, 1998, page 1)

In an appeal to the people of the United States she wrote, “Oh honest Americans, as Christians hear me for my down-trodden people! Their form of government is as dear to them as yours is precious to you. Quite as warmly as you love your country, so they love theirs. With all your goodly possessions, covering a territory so immense that there yet remain parts unexplored, possessing islands, although near at hand, had to be neutral ground in time of war, do no covet the little vineyard of Naboth’s, so far from your shores, lest the punishment of Ahab fall upon you, if not in your day, in that of your children, for ‘be not deceived God is not mocked.’”

“The people to whom your fathers told of the living God, and taught to call  Father, and whom the sons now seek to despoil and destroy, are crying aloud to him in their time of trouble; and he will keep his promise, and will listen to the voices of his Hawaiian children lamenting for their homes.” (Hawai’i’s Story: By Hawaii’s Queen, Liliʻuokalani, Charles E. Tuttle Company, Rutland, Vermont & Tokyo Japan, page 373-374)

In the years that followed the queen continued to appeal to the U.S. government for the restoration of the Hawaiian nation. While it would seem all of her efforts were of no consequence, the truth is, it is her voice that we continue to hear today.

With all that she had experienced and witnessed in her lifetime, the queen expressed her intimacy with God and her forgiveness towards those who destroyed the Hawaiian nation. In March 1895 while imprisoned at ‘Iolani Palace she wrote what we now know as the “Queen’s Prayer.”

“Behold not with malevolence the sins of humankind, but forgive and cleanse. And so, O Lord, beneath your wings be our peace forever more.” (The New Century Hymnal, The Pilgrim Press, Cleveland, Ohio, 1995, #580) 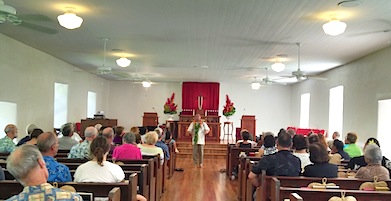 Over the last two weeks I have been blessed to have been in the company of the Rev. Dr. Allan Boesak of South Africa. Boesak was the keynote speaker for the annual meeting of the Hawaiʻi Conference of the United Church of Christ.

We met in Kailua, Kona on the island of Hawaiʻi from June 6-8, 2013. After the meeting in Kona ended last Saturday, Dr. Boesak and his wife and daughter, Elna and Andrea, came to Maui for a time of rest and recuperation from their busy lives.

They joined us for worship last Sunday and this morning at the 10:00 a.m. service, he will be joining us as a guest preacher. A community forum with Dr. Boesak was held here yesterday and it was at that gathering that he shared with us that today, June 16 is Youth Day in South Africa.

In 1976, an estimated 20,000 high school students took part in a series of protests in response to the government’s decision to introduce Afrikaans as the medium of instruction in local schools. Many students were killed that day in what is also known as the Soweto Uprising. Officially, the number of people who died is usually given as 176, though others believe up to 700 may have been killed.

Dr. Boesak shared stories about the struggle against apartheid and challenging injustice and how difficult it is for us to understand that forgiveness is essential if true justice is to be achieved. It is a difficulty reflected in a recent interview on National Public Radio with Peggy Wallace Kennedy, daughter of former Alabama Governor George Wallace.

This summer marks the 50th anniversary of the day Wallace stood in a schoolhouse door to prevent two Black students, Vivian Malone and James Hood, from entering. It was a difficult time.

After an assassination attempt was made on Governor Wallace in 1972, his life changed. In October of 1996, Vivian Malone and James Hood had a private meeting with Governor Wallace.

His daughter recalled that day and said, “My father called her (Vivian Malone) an icon of civil rights, of the civil rights movement and how she conducted herself with great dignity and grace. His eyes filled up with tears, and she reached over and touched his hand as a gesture of forgiveness” (A Daughter’s Struggle To Overcome A Legacy Of Segregation, Michele Norris, June 11, 2013)

It may be that the story of Peggy Wallace Kennedy and her relationship with her father reminds us that justice begins at home in our families. “When asked if the 50th anniversary of her father’s stand at the schoolhouse door provides her an opportunity to add her own voice to the historical record,” she replied, “Oh, I think so. I know I have found my own voice in the last couple of years.”

For many years she avoided the spotlight but is now using her voice to promote racial healing. She has marched across the Edmund Pettus Bridge in Selma, Alabama with U.S. Representative John Lewis to mark the spot where he and others were beaten and bloodied in 1965.