Our kūpuna or Hawaiian ancestors often share their wisdom with us through the ʻōlelo noʻeau or wisdom sayings passed down from generation to generation in much the same way Jesus did when he spoke in parables. This is particularly true in the naming of a child. 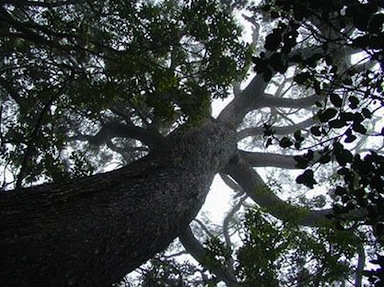 The wood was prized for many products including canoes. Koa canoes were built from a single, straight koa trunk. The trees can reach a diameter of over 10 feet and are resistant to salt water, making them perfect for canoe building. The name Kekoa was given to a person as an affirmation of one who was to be held in high regard. It was a name meant to be a blessing.

But I have also heard it said that it would be a burden to a child to carry such a name if he or she were named after his or her father or mother. Hawaiian names are not always gender specific. The hesitation in giving the same name to a child notwithstanding the seniors and juniors we know or the sequential naming by generations is the expectations that the son or daughter would be like the father in every way. Such expectations could prove to be burdensome to a child.

Rather than Kekoa it has been suggested that the child carry the name Kalauokekoa – “the leaf of the koa tree.” The child is able to honor his or her parent without the burden of having to be like his or her parent.

All this talk of naming and of trees may seem an unlikely topic for Father’s Day. But if you will bear with me for a moment.

A shrub, unlike a tree, is distinguished by its multiple stems and shorter height, usually 15 to 20 feet tall. A tree has many secondary branches supported clear of the ground on a single stem or trunk and unlike a shrub, a tree grow over 380 feet tall.

Our reading from The Book of Ezekiel is filled with images of low and high trees to describe “God’s action in the world, either despite or on behalf of God’s people . . . steeped in images of tall, majestic cedar trees. These are the most noble of all trees and an image of Israel’s future greatness.” (“Living the Word/Reflections on the Lectionary,” Nadia Bolz-Weber, The Christian Century, June 13, 2012, page 20)

All this talk about naming and trees and now shrubs may seem an unlikely subject matter for Father’s Day. But Ezekiel and Jesus offer us images of trees and shrubs in particular that remind us of the reality of the world in which we live.

The Rev. Nadia Bolz-Weber is a founding pastor of House for All Sinners and Saints, a mission church of the Evangelical Lutheran Church in America in Denver, Colorado. “I imagine,” she writes in her reading of the passage from Ezekiel, “that an image in which God is making you the greatest and tallest and most majestic of all (people) would be a comfort and hope . . . ” She continues, “It certainly would have been a comfort to Ezekiel’s original audience, which was in Babylonian exile at the time.” (Op. cit.)

But I imagine some of the people in exile were far from comforted wondering whether or not Ezekiel had lost his mind to think that God’s actions in the world were majestic. I imagine their disappointment in God was no different than the expectations some of us may have had of wanting fathers who were “majestic” in providing their nurture and care to us.

Yet the image is there of a God who will plant a sprig that will become a noble cedar. The image is there of a caring father. “Under it every kind of bird will live; in the shade of its branches will nest winged creatures of every kind.” They shall have a home and in time the people will find their way back home from Babylon to Jerusalem and they will flourish.

So it is that despite the disappointment some of us may feel this Father’s Day about our own fathers, we too shall find our way back “home” through the nurturing and caring relationships we share with others in our lives now. Jesus made it clear in our reading from The Gospel According to Mark (Mark 3:35) last Sunday that whoever does the will of God is my mother, my sister, my brother, and I would add (my father).

Yes, we are born into our families and so we are family by blood. But we are also family by faith. 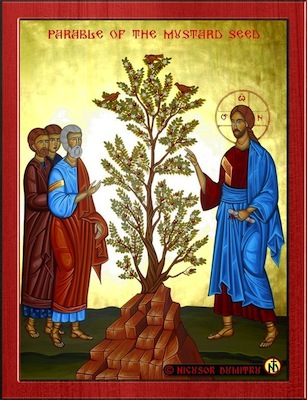 Now about that mustard seed. For the fathers of this world who care for their children’s well-being and safety, who seek to provide their care, nurture, and hope for a good future, we give thanks to God.

For those of us who have known such fathers, it is very likely that it has taken a lifetime for us to become fully aware of how “majestic” they were in providing nurture and care. The growth of our awareness and appreciation may be likened to the growth of a mustard seed.

Ruth Crowley was an advice columnist for the Chicago Sun-Times beginning in 1943. For 56 years, we knew her as Ann Landers. Her column appeared in many newspapers across North America. Among her writings is the following which bears the title, My Father.

My father when I was four years old: My daddy can do anything.

When I was five years old: My daddy knows a whole lot.

When I was six years old: My dad is smarter than your dad.

When I was eight years old: My dad doesn’t know exactly everything.

When I was 10 years old: In the olden days, when my dad grew up, things were sure different.

When I was 12 years old: Oh, well, naturally, Dad doesn’t know anything about that.
He is too old to remember his childhood.

When I was 14 years old: Don’t pay any attention to my dad. He is so old-fashioned.

When I was 21 years old: Him? My Lord, he’s hopelessly out of date.

When I was 25 years old: Dad knows about it,
but then he should because he has been around so long.

When I was 30 years old: Maybe we should ask Dad what he thinks.
After all, he’s had a lot of experience.

When I was 35 years old: I’m not doing a single thing until I talk to Dad.

When I was 40 years old: I wonder how Dad would have handled it. He was so wise.

When I was 50 years old: I’d give anything if Dad were here now
so I could talk this over with him.
Too bad I didn’t appreciate how smart he was.
I could have learned a lot from him.

Whatever our relationships may have been with our fathers, whatever expectations we may have had of them, the words of Ann Landers reminds us that our hope is that we will each grow in stature and wisdom through all our days - that like the noble cedar and the greatest of all shrubs and the birds of the air that make their nests, their homes in it branches - so too shall we find our way home.