"They Were Able to Hear It" 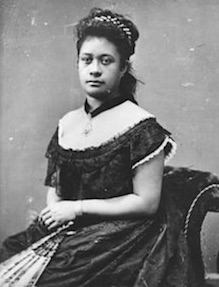 “Kuʻu Ipo I Ka Heʻe Puʻe One” is a beautiful song that was composed by Princess Likelike. She was born in 1851 and was sister of the last two ruling monarchs of Hawai’i – her brother Kalākaua and her sister Lili‘uokalani.

Likelike died in 1887 at the age of 36. “Kuʻu Ipo I Ka Heʻe Puʻe One” is one of her most well known compositions. Many believe it was written for a heartbroken girl who could not marry the love of her life.

Over the years it has been recorded by many music artists here in Hawaiʻi. It has also been interpreted by many into hula.

The English translation by Ruth Tyau and Samuel Elbert reads as follows:

My sweetheart in the rippling hills of sand
With the sea rustling the pebbles
There, the memory is impassioned
In the forest where we delighted

Here, please listen
Here, your lover is here
He came last night
We delighted in the forest

The wind came first
The Puʻulena wind passed by
You’ve lost your chance, oh friend
We delighted in the forest

The translation is quite proper but as students of hula and the Hawaiian language are aware there is kaona – hidden meaning - not so much in the translation of the song but in its various interpretations. Now I know some of you may be feeling a bit anxious because to speak of the kaona of the song may be impolite to some and inappropriate to others – especially in church.

But this much I will say – a heʻe is an octopus. So the question may be asked: “Why would anyone compare a “sweetheart” to an octopus? Let just say that if you have an active and playful imagination, the answer will come to you.

Kumu hula and cultural specialist Luana Kawaʻa drew upon the work of Jamaica Osorio and her poetic interpretation of the word kaona. “kaona,” she said, “literally translates as a hidden meaning, as in poetry. It can be a concealed reference to a person, place or thing. When we look at Hawaiian music we find layer upon layer of kaona. A good haku mele composes a song rich with kaona. So rich that as you peel away the layers you find stories hidden within stories, messages and suggestions that play on our imagination.”

“So intertwined that you are left to wonder what the true meaning of the song is. As a child, I knew one level of kaona. As I grew up and began to understand the language, my understanding of these mele expanded as well . . . as I’ve gone through life experiences the kaona has become even richer and my understanding has deepened.”

“When I first learned the mele [or song] ʻHiʻilawe’”, Kawaʻa continued, “I knew it to be a song about Waipiʻo and the famous waterfall there. Later in life I came to understand that the kaona of the mele [the song] revealed a secret love affair talked about like the chattering birds among the people of Waipiʻo.”

“Now kaona is not just limited to Hawaiian mele [or song]. There can be kaona when we speak. Our ʻōlelo noʻeau [or wisdom sayings] are filled with kaona.”

“Even our actions have kaona, double and hidden meanings to them. When Liliʻuokalani was imprisoned in ʻIolani Palace [by American businessmen], [the] people would bring her flowers wrapped in newspaper. There was kaona in their actions.”

“This allowed Liliʻu to be kept abreast of the latest news happening outside the palace windows.” [There was no cable news and no “fake news” as far as we can know when it came to the Hawaiian-language newspapers].

“See the kaona. Their gift was much more than flowers.” Bringing the newspapers to her was an expression of their aloha for her.

I learned some time ago that when Harriet Tubman, a former slave became known as a “conductor” of the Underground Railroad, she used spirituals such as “Go Down Moses” to signal slaves that she was in the area, and would help any who wanted to escape the plantations of the south for the cities of the north. We know that the spirituals proliferated in the last few decades of the eighteenth century leading up to the abolishment of legalized slavery in the1860s.

Those who had been enslaved became fascinated by the Biblical stories containing parallels to their own lives. They began to create spirituals that retold the stories of Biblical figures like Daniel and Moses. As Christianity took hold within the slave population, spirituals served as a way to express their new faith, as well as their sorrows and hopes.

Surprisingly, the white slave owners were oblivious to the kaona of the spirituals. Frederick Douglass, a nineteenth century abolitionist author and former slave, wrote in his book My Bondage and My Freedom (1885) of singing spirituals during his years in bondage: “A keen observer might have detected in our repeated singing of ʻO Canaan, sweet Canaan, I am bound for the land of Canaan,’ something more than a hope of reaching heaven. We meant to reach the North, and the North was our Canaan.”

What is remarkable about the Hawaiian mele or the African American spiritual is the way in which each writer or composer sought to convey a message to all who would listen. In a way, I believe that when Jesus spoke in parables he made ample use of kaona as a method for his teaching.

Parables, like Hawaiian poetry or mele or the African American spiritual, provided a literary foundation for the lessons Jesus sought to teach. In the hearing of mele, spiritual or parable, a great deal is demanded of the listener. The meaning is not obvious to all.

“Parables, then, have a revealing/concealing quality, creating their own hearers and non-hearers” (Preaching Through the Christian Year B, Craddock, Hayes, Holladay& Tucker, Trinity Press International, Harrisburg, Pennsylvania, 1993, page 311). Recall again what Kawa’a said: “As a child, I knew one level of kaona. As I grew up and began to understand the language, my understanding of these mele expanded as well . . . as I’ve gone through life experiences the kaona has become even richer and my understanding has deepened.”

I believe that that is what happened to the disciples, those who were closest to Jesus. They “hear” Jesus not because they are smarter or more intelligent but because of their personal relationship with him. They were with him (Op. cit.) as Jesus sought to explain everything to them in private. Over time, their understanding deepened.

In the two parables, Jesus likens the kingdom of God to a sower of seeds and a mustard seed. In the first parable, the seed appears to grow in secret, despite the presence of the sower (Mark 4:26-29).

“If verse 29 is the key, then the parable says that now is the time to reap the harvest; this is the end time; all that has gone before was but the growing season. More likely, however, [the key verse] is the interpretation that focuses more upon the growth that takes place totally apart from human effort - the sower sleeps and rises – (Mark 4:27) and from human understanding - ʻhe does not know how’ – (Mark 4:27). The seed carries its own future in its bosom, and efforts to coerce or force growth is futile. The kingdom of God is exactly that – the kingdom of God” (Op. cit.).

Someone recently said, “I would cite to you the Apostle Paul and his clear and wise command in Romans 13 to obey the laws of the government because God has ordained them for the purpose of order. Orderly and lawful processes are good in themselves and protect the weak and lawful.” The citation was made in support of the recent U.S. Department of Justice policy to justify the separation of children and parents at the U.S./Mexico border whether they are crossing the border illegally or legally seeking asylum.

Knowing that the Apostle Paul was writing his letter while living under the Roman Empire puts the citation within the context of what was happening at the time. Paul had already been accused for causing disturbances in Ephesus and Jerusalem.

Clearly, those in the Roman Empire were concerned he might incite the people to rebel against the government. Paul knows he is walking a thin line wanting to forestall the wrath of the Roman government while encouraging his followers to remain faithful.

We remember that it was at Mt. Sinai that the Ten Commandments were given and that the law was established to govern the lives of the people of God. It is true that governments, including the authorities of the Roman Empire, also made laws as we have in our country and while we seek to be obedient to the “just” laws of the land, it is also true that we are called as people of faith to challenge laws that are unjust.

What was left out of the Biblical citation to separate families is what follows in verses 9 and 10. “Love your neighbor as yourself. Love does no wrong to a neighbor; therefore, love is the fulfilling of the law.” The question before us then is this: Who is breaking the law of love?

The parable offers us a word of encouragement. As we look about the world in which we live, we may find ourselves becoming frustrated by what may appear to be small beginnings – whether it is students demanding “never again” or women willing to say to one another “me too” or African Americans reminding us that “black lives matter.” We may find ourselves becoming discouraged, but the parable of the growing seed and the parable of the mustard seed reminds us all to take heart (Op. cit.).

We must let the vision of the end – the tiny seed that becomes the greatest of all shrubs – inspire and inform what we do today to make certain that we are fulfilling the law of love; that everyone will have a place at the table – regardless of gender, race, class, sexual orientation, physical or mental ability, age or any other “categories” we may see that makes us uniquely and distinctly human. We must let the kingdom of God come on earth as it is in heaven, knowing that the end as well as the beginning are God’s doing and that we are to be instruments of God’s aloha so that the law of love may be fulfilled.