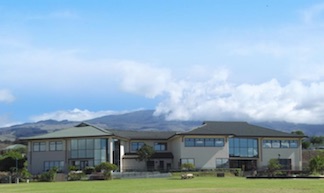 I spent the last week attending four days of meetings with lay and clergy delegates gathered on the Kamehameha Schools campus in Pukalani for the 195th ‘Aha Pae’āina. The Pae’āina is the annual meeting of the Hawai‘i Conference – United Church of Christ that includes representatives from 128 member churches from Kaua‘i, O‘ahu, Moloka‘i, Maui, Lāna‘i, and Hawai’i island.

It was good to see old friends and colleagues and to meet those who have become a part of our wider church family. There was time for worship and fellowship, study and work.

By the close of the conference around midday yesterday, there was little time to return to the routine of preparing for another Sunday morning here at Keawala’i. I also realized by the end of the day, I was running on empty. I wasn’t even running on fumes. Every bit of energy was gone.

I fretted over what I wanted to share with you this morning knowing that among other things that aside from being the Second Sunday after Pentecost, it is also Father’s Day. Given my own experience of having grown up without the presence of my biological father in my life, a day like today has always been awkward for me. Over the years, I have found myself drawn to stories of fathers and sons whether in music, poetry, film, books or theater or through the personal stories of family and friends, neighbors and sometimes strangers.

August Wilson was born in 1945 in a Pittsburgh slum. He was raised with his five brothers and sisters by his African American mother. His father, who was white, abandoned the family when he was a child. For a time he was raised by his mother and later nurtured by his stepfather.

In his 1983 play Fences, Wilson dramatized the struggle of African Americans to find good jobs and hold together families forty years after leaving the South in the “Great Migration” north from 1910 to 1930. It was during that period that the black population doubled and then tripled in Pittsburgh, Chicago, and New York City.

For almost a decade, from 1981 to 1989 Wilson took on an ambitious ten-play cycle dramatizing different decades of African American history in the twentieth century. His plays went on to earn him two Pulitzer prizes, three New York Drama Critics Circle Awards, one American Theater Critics’ Association Award and several Tony Awards including this year’s Tony for the Best Revival of a Play and an Oscar for Best Performance by an Actress in a Supporting Role for Viola Davis just this year in the 2017 film adaptation of the play.

I have not seen the film or read the entire play or seen it performed on stage. But what I have seen are scenes from the play highlighted in trailers on television and on the internet.

There is a particularly powerful encounter between two characters in Act I, Scene III. The dialogue between father and son is peppered with words that are best spoken within the theater.

In a way, the power of scene is diminished because what I am sharing with you this morning is my own self-censorship. But the original words are in the printed copies of this sermon that you will find at the Greeter’s Table. My apologies to Wilson.

Cory and his father Troy are in the family yard.

By the time we get to Scene III we area already aware that Troy is 53-year-old man. August describes him as “a large man with thick, heavy hands; it is this largeness that he strives to fill out and make an accommodation with. Together with his blackness, his largeness informs his sensibilities and the choices he had made in his life.”

In Scene I he is engaged in a “ritual of talk and drink” with a friend. “Troy is usually the most talkative and at times he can be crude and almost vulgar.” (Fences, August Wilson, 1983)

It is in the yard while working on a fence that his father promised his wife - and Cory’s mom - Rose would be built that they become engaged in a father-son conversation. At one point Cory says to his dad: “Can I ask you a question?”

“What the hell you wanna ask me?” his father replies.

Cory asks: “How come you aint’t never liked me?

Cory comes over to where his father is working. He stands slouched over and his father shoves him on his shoulder.

“Straighten up, goddammit! I asked you a question. What law is there that say I got to like you?

“Well, all right then! Don’t you eat every day?”

“Answer me when I talk to you! Don’t you eat every day?

“Nigger (sic), as long you in my house, you put that sir on the end of it when you talk to me!”

“Got a roof over your head.”

“Got clothes on you back.”

“Why do you think that is?”

“Like you,” he bellows. “I go out of here every morning bust my butt, putting up with them crackers every day, cause I like you? You about the biggest fool I ever saw.”

“It’s my job. It’s my responsibility! You understand that? A man got to take care his family. You live in my house, sleep you behind on my bed clothes; fill your belly up with my food cause you my son. You my flesh and blood. Not ’cause I like you. Cause it’s my duty to take care of you. I owe a responsibility to you!”

“Let’s get this straight right here, before it go along any further. I ain’t got to like you. Mr. Rand don’t give me my money come payday cause he likes me. He gives me cause he owe me. I done give you everything I had to give you. I gave you your life! Me and your mama worked that out between us. And liking your black ass wasn’t part of the bargain. Don’t you try and go through life worrying about if somebody like you or not. You best be making sure they doing things right by you, you understand what I am saying, boy.”

The tension throughout the play is palpable, in part, because it was set in 1957. American cities welcomed thousands upon thousands of poor immigrants and refugees from Europe. But the descendants of African slaves were not welcomed in the same way. Cory’s father gave up a baseball career and became a trash collector. It was 1957.

I thought about what it may have been like for the twelve disciples that Jesus summoned to his side. He gave them authority to cast out unclean spirits and to cure every disease and illness. (Matthew 10:1)

But what about their families? James and his brother John were both drawn to Jesus. They were the sons of Zebeedee. Mention is also made that James was the son of Alphaeus. (Matthew 10:2-4)

Whatever relationships the disciples may have had with their own fathers, Jesus makes clear the authority they have been given to teach, heal and proclaim the good news of God’s aloha for the world comes not from himself but from “the Father who dwells” in him. He tells Philip, “Believe me that I am in the Father and the Father in me.” (John 14:11) The relationship between Jesus and God as God the Father is, has been and will always be about love.

The first time I saw the scene between Cory and his father Troy in Fences, it was from the 1987 Broadway production of Fences. Actor James Earl Jones played the leading role and received the Tony Award for Best Actor for his portrayal of Troy. This year, Jones received the 2017 Special Tony Award for Lifetime Achievement in the Theatre having appeared in 20 Broadway productions since 1958.

He cast a large and imposing figure on stage. I was surprised by his performance and the crushing impact it had on my own emotions.

Jesus did not say, “I give you a new commandment, that you like one another.” We proclaim the good news not out of duty or responsibility, but out of love. Amen.