One Sunday morning some time ago now, a young man came into this sanctuary and sat down in the front pew during our choir rehearsal. He looked unshaven and a little disheveled. As soon as he sat down, he began carrying on a quiet conversation with himself.

Auntie Eleanor, who was our most senior deacon at that time, came in and sat down next to him unaware of his behavior. She greeted him and sat there for a moment when she herself realized the young man was talking to himself. A look of confusion and then panic swept across her face.

Auntie’s health had already been in decline over the previous years. Her loss of memory had grown more and more acute with each passing season. As a result, it may be that her loss of memory—of not knowing what to say or do—exacerbated her anxiety.

I knew enough to catch Auntie Edie’s attention. At that time, Auntie Edie sang in the soprano section of our choir. She spent her career as a mental health nurse that included contact with clients who were diagnosed with schizophrenia and other severe mental illnesses. 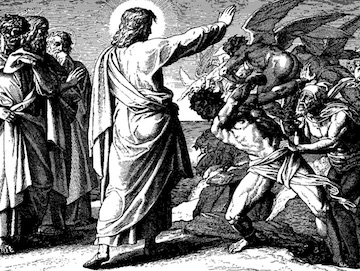 Whatever the reasons may have been that caused him to be troubled it was evident that something was amiss. Perhaps he was not unlike the Gerasene man in our reading from The Gospel According to Luke who was troubled and profoundly tormented.

The encounter between the man and Jesus is a dramatic example of God’s merciful action toward someone in dire need of healing and deliverance. (Preaching through the Christian Year C, Craddock, Hayes, Holladay & Tucker, Trinity Press International, Harrisburg, Pennsylvania, 1994, Page 305) But it is also a dramatic example of the many ways in which we are bound, like the Gerasene man, to our own demons.

When the man saw Jesus, it was the demons in him that acknowledged Jesus as the Son of the Most High God. We are never told what the demons were that troubled and tormented him. There was no medical diagnosis for his pain and suffering. There was only the “label” – a demoniac, a man possessed of demons. Like those in the Gerasene countryside, we use our own labels today. We label those with a mental illness as “mentally-ill” perhaps wanting to distance ourselves as if to say “we are normal.”

But one could well imagine that the man was bound by the things that trouble many of us today. If the truth be told, we are bound by one or many of our own demons and perhaps may not even know it. Anxiety, fear, our inability to forgive, anger, bitterness, disappointment, distraction, memories of the past – all these things can affect our perceptions and experiences and have a deep impact on our lives. (Living the Word, Christian Century, June 8, 2016, page 20)

Like the Gerasene man whose demons were legion, so it is that our demons are many. That was apparent following the horrific mass shooting in Orlando, Florida last Sunday. Fear of Islam and hatred of those who are a part of the LGBT community reminds us that we ought not to demonize Islam or members of the LGBT community. Instead, we must recognize that our fear of others and our hatred of others may well be among the many demons troubling our world.

In writing his letter to those in the church in Galatia, the Apostle Paul reminds the Galatians that they are all one in Jesus. There is no longer Jew or Greek, slave or free, male or female.

The man begged Jesus that he might go with him. But Jesus sent him away, saying, “Return to your house, and declare how much God has done for you.” (Luke 8:39)

In his letter to the church in Galatia, the Apostle Paul provides us with a contrast between the “works of the flesh” and the “fruit of the Spirit” as he brings his letter to a close. “Live by the Spirit,” Paul admonishes the Galatians, “and do not gratify the desires of the flesh. The fruits of the Spirit are “love, joy, peace, patience, kindness, generosity, faithfulness, gentleness, and self-control.” (Galatians 5:22)

The works of the flesh, Paul writes, are obvious: “fornication, impurity, licentiousness, idolatry, sorcery, enmities, strife, jealousy, anger, quarrels, dissensions, factions, envy, drunkenness, carousing and things like these ... ” The tragedy in Orlando provides us with an opportunity to see the contrast between the best and the worst of who we are as a human family.

As we look about the world in which we live today, living by the Spirit is crucial if we are to overcome our compunction to demonize other human beings. There are no herds of swine into which we can cast all of our demons. As we continue through this season of Pentecost, we give thanks to God knowing that by embracing one another and by living by the Sprit, the chains and shackles of all our fears and hatreds will be broken by the power of love.

Let us pray: As you spoke to the Legions, O God, speak now to the forces that surround us. By your Spirit, let your word illumine the darkness, and your light break through our delusions, that we may see the truth of your compassion for all of humankind. Amen.