I do not know Danni – except to say that she was one of forty-five writers from the Women’s Community Correctional Center in Kailua here on this island who were a part of a creative writing class. Her words appear in Hulihia IX: Writings from Prison - Conversations with Myself, an anthology of poems and writings that was published two years ago (Prison Writing Project, The Pūʻā Foundation, Kailua, Hawaii, 2013, page 17). She wrote:

People around me
don’t understand what I feel.
They don’t need to know.

People are busy
making themselves feel better.
They wait to set traps.

I feel the sun’s heat.
It’s melting my heart and soul
warmly loving me.

I spin in my mind.
Things go snap and I succumb.
I break down and cry.

Who cares about me?
Words are so easy to say.
I am disgusted.

I can stand alone.
But two can stand together.
Learn to be a friend. 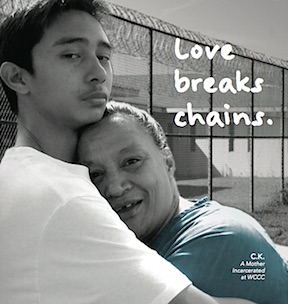 Pat Clough, the creative writing teacher who shared her time with Danni and many other incarcerated women over the last ten years said, “While I have taught (the women) about writing, about the power of words on paper . . . they have taught me about endurance and forgiveness and the overcoming of unimaginable pain” (Ibid,. page 71). She added, “Humor and pain and hope share the pages of Hulihia IX in honest and simply stated truths” (Ibid,. page ii).

Danni’s words reflect that honesty and truth – one moment she seems certain that others do not understand what she feels and in the next moment she seems convinced that if they did understand, traps would be set by others to diminish and even deny what she feels. One moment there is the sun’s heat to remind her of love and in the next things snap and break and there is only grief.

“Who cares about me?” she asks.

One day a Samaritan woman came to draw water at a well in the city called Sychar. Jesus was sitting at the well when she arrived. He was tired and hungry and thirsty. The disciples had gone off to buy some food.

It was about noon and I imagine it was probably the hottest time of day. Jesus said to the woman, “Give me a drink” (John 4:7).

To which she replies, “You’re kidding, right? How is it that you, a Jew, ask of me, a Samaritan, for a drink of water? You know that we do not share things in common” (John 4:9).

Jesus responds by telling her that if she knew who he was she would have asked him for water and he would have given her living water. “Right! Uh huh! So you don’t even have a bucket with which to draw water from the well of our ancestor Jacob and you are telling me you can give me this water? Well if that is the case than give me this water so that I may never be thirsty again.”

For some reason Jesus then says to her, “Go, call your husband, and come back.”

“I have no husband,” she replies.

Surprised by his response she concludes, “I see you are a prophet.”

She goes on to question him about where one is to worship. Jesus makes it very clear that the act of worship is not confined to a location nor is bound by tradition or ritual or dogma. God is spirit, and those who worship God must worship God in spirit and truth (John 4:24).

What always amazes me about the story of Samaritan woman who encounters Jesus at Jacob’s well is what he did. What did Jesus do?

We may be quick to point out that he told her: “Look, I am the one who can give you living water.” Or, “Only a prophet would know what I know about the number of husbands you have had.” Or, “I am the Messiah. I am the Christ.”

While that is evident in a reading of the biblical text, the question remains. What did he do?

That was the hulihia moment that transformed her life. At every turn the Samaritan woman may have wondered as Danni did,  “Who cares about me?”

Wrong marital status. She was married five times and living with someone who was not her husband. He was single.

Pat and Christy, Tanya and Maryann, Melissa and Daphne, Noelani and Cynthia and many other incarcerated women were there in that circle of writers with Danni. She was not alone.

In 1996, I was invited to serve on the Board of Directors of Pūʻā Foundation. I retired from the board in March of this year. While I am no longer a member of the board, I remain appreciative of the important work and leadership that Toni Bissen has provided and continues to provide as the Executive Director for the foundation. It has been out of Toni’s collaborative work with others that the emphasis on “trauma to transformation” has evolved as the key focus for the work of the foundation.

Trauma, whether individual or collective, is one that we must all face. The trauma of the Samaritan woman cannot be fully understood only from an individual perspective.

Biblical scholars will tell us there had been a long-running conflict between the Jews and the Samaritans long before the Samaritan woman appeared at the well that day. Samaria had been the capital of the northern kingdom of Israel during the period of the divided kingdoms.

In 721 BCE Assyria conquered Israel and sent most of the people to live in Assyria. The Assyrians replaced the Jews with five alien tribes who resettled the area (2 Kings 17:13-34). Eventually of the Jews returned and intermarried with the members of the tribes. Jesus does not appear to hesitate in disregarding the ancient enmity or hatred between the Jews and Samaritans.

As with the Samaritan woman, the trauma of Danni and the other incarcerated women cannot be fully understood only from an individual perspective. What makes the work of the Pūʻā Foundation significant is the ways in which it seeks to come to terms with the impact the overthrow of 1893 had not only on Danni’s life but on all of our lives.

The women themselves remind us of the great strength and courage they found in Liliʻuokalani’s willingness to forgive those who had accused her unjustly of wanting to bring harm upon Americans who were residing in Hawaiʻi at the time of the overthrow in 1893. One of the women said, “Liliʻuokalani forgave those who caused her great harm. She gave the people hope and courage. The queen inspires me. I always think about her when it comes to forgiveness.”

Another said, “I have been in and out of the prison for twenty years. The change came from realizing that prison became a puʻuhonua, a sanctuary, a place where it was no longer about punishment but healing. It became a place where we could live a forgiven life.”

Two weeks ago the Truth and Reconciliation Commission of Canada concluded six years of hearing testimonies, of listening to the stories of Canada’s aboriginal people or First Nation people who were forced to attend what was called residential schools. Canada’s Prime Minister Stephen Harper gave a formal apology the aboriginal or First Nation people seven years ago on June 11, 2008. The commission was set up at that time with the idea that it would help Canadians better understand the actions and consequences of the schools and allow the people to express their feelings about the pain and trauma they experienced.

The schools were set up in the 1840’s by Christian organizations with the thought that it would be best for the aboriginal people to be assimilated and that this would mean that the children would not be allowed to speak their own languages or exhibit any acknowledgement of their heritage and culture. Any violation of rules would be met with severe punishment.

It is estimated that over 150,000 children were forcibly removed from their families and communities and forced to attend the schools. About 3,201 children died while attending the schools (The Christian Science Monitor Weekly, June 22, 2015, page 33).

The report by the commission points out that because the children were isolated from their own families and often subjected to a variety of abuses, many grew up without the knowledge or ability to raise their own families. Canada’s commission was modeled after the Truth and Reconciliation Commission of South Africa. Several dozen other commissions have been established around the world including Argentina, Brazil, the Czech Republic, Panama, Sri Lanka and Uganda.

Justice Murray Sinclair, the first aboriginal associate chief justice in Manitoba and a member of the commission, said in a recent interview that the 300-page summary of the final report acknowledges that “evidence is mounting that the government did try to eliminate the culture and language of indigenous people for well over 100 years.” The power of words will be there, on paper, in the summary and in the full report

To speak of forgiveness in the midst of overcoming such unimaginable pain is not the way of the world, but it is the way of the cross. It would be easy to look upon the historical trauma that impacted native and aboriginal individuals and communities here in Hawaiʻi and in Canada and conclude that the church no longer holds the moral high ground.

We see the power for transformation and wholeness in the writings of the women of Hulihia, in the story of the Samaritan woman at the well and in Liliʻuokalani’s written account of her own life. To forgive is not the way of the world, but it is the way of the cross and out of that forgiveness the journey from trauma to transformation, from brokenness to wholeness is made possible.

Let us pray: We know, O God, that women in prison are not just inmates. They are our mothers, daughters, sisters, wives, cousins, aunties, grandmas, neighbors and friends. When they serve time, we serve it too.

We see in the face of a young man and a mother held in his embrace, how a family is strengthened and renewed. We see that no one need stand alone, that we can stand together and for that we give thanks. Ke mahalo nei mākou iā ʻoe, e ke Akua. Amen.