Elva Marroquin Rosales is a Guatemalan immigrant living in Los Angeles. She has been waiting for a month for official word on the status of her two small children who crossed the U.S.–Mexico border alone. 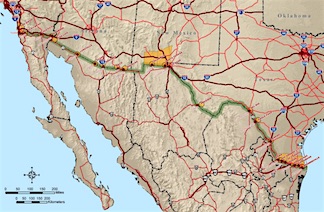 For two or three weeks she has heard nothing about her son Angel, 10 and daughter Dulce, 7. It’s a silence many Central American families in the U.S. endure, wondering if their child is alive or dead.

“So this woman makes the choice (keyword) to come here illegally and put her children through hell and now everyone has to feel sorry for them? Give me a break.” (Central American immigrant parents agonize when child crosses border alone, Michael Martinez & Jacqueline Hurtado, CNN, Saturday, June 21, 2018)

Elva received a phone call about two weeks ago. An immigration official sought the mother’s voice to calm her two sobbing children who were at a detention center in Texas.

At last, Elva knew they were at least alive. She said, “My children were heartbroken, sad, tearful, crying beyond comparison, begging me to take them out of there.” As they were talking she tried to sooth them and then the phone went dead.

After the phone went dead, she was unable to track down the location of the detention center in Texas.

“I wanted to run and tell him, ‘Son, I’m here and you have me here,’ but I simply couldn’t. I cried,” Elva said, “and asked God to look after them.”

As of Wednesday last week over 3,000 unaccompanied children from 11 countries were in U.S. Customs and Border Protection custody in detention centers along the U.S.-Mexico border. Most of the children entering the U.S. come from Honduras, El Salvador, Mexico and Guatemala. Many are fleeing drug and gang violence in their home countries.

“Why not . . . eliminate the services they receive? Make it hard for them to live here. They won’t be fleeing their country if all they get when they arrive is a cot and bread and water while they await a bus ride back with no AC.” (Op. cit.)

Elva cried. Another woman cried centuries ago. Her name was Hagar and she wept for her son.

In our reading from The Book of Genesis we find an account not of a deportation but an expulsion. It is a troubling, yet powerful story.

It begins in human jealousy and ambivalence and ends with a promise fulfilled. Verse 8 provides the background to the events. Sarah’s child, Isaac, grows up and Abraham holds a “great feast” on the day he is weaned. It is the scene of a happy family celebration.

Sarah notices what appears to be another happy scene, that of her young son, Isaac, playing with his half-brother. Hagar’s son, Isaac’s half-brother, is left unnamed throughout the entire episode.

He is identified by Sarah as “the son of Hagar the Egyptian.” An earlier account identifies Hagar as Sarah’s “slave girl,” whom Sarah, because of infertility, had taken to Abraham so she could bear him a son and therefore an heir.

A conflict ensues at the celebration when Sarah’s insists that Abraham “cast out” Hagar and her son. Sarah’s jealousy is obvious when she says “the son of this slave woman shall not inherit along with my son Isaac.” (Genesis 21:10)

Sarah knows; Abraham knows’ Hagar knows that according to ancient Near Eastern customs, Hagar’s unnamed son is the legitimate heir. Nothing illegal here.

Sarah knows. Abraham knows. Hagar knows - that a mother’s security lay first with her husband and then with her son (Genesis 38). The conflict over the rights of inheritance is obvious not only with regard to property, but with the promise made to Abraham. Through whom will the line of inheritance run?

Abraham is ambivalent about Sarah’s proposal to “cast out” Hagar. He is distressed about the fate of his first born son. But without taking any initiative, God intervenes to resolve the crisis, instructing him to do as Sarah asks.

God reassures Abraham about the fate of Hagar and her son (Genesis 21:12-13). God resolves one conflict by emphasizing that the old promise to Abraham (Genesis 12:1-3) will go through Isaac, and makes a new promise that the other son will be the ancestor of another nation.

At this point one would think that the story will now have a happy ending. But the story doesn’t end.

Abraham prepares Hagar for her journey providing bread and water. The scene is touching. It is early morning. Abraham takes bread to her and places a skin of water on her shoulder and sends her and their son, whom we come to know as Ishmael, away.

Hagar and Ishmael head south to wander in the wilderness in Beer Sheba. They quickly run out of water and Hagar is aware that they are on the verge of death. (Genesis 21:15-19)

She places Ishmael under the shade of a bush and moves off to await his death. It is then that she lifts up her voice and weeps.

An angel asks Hagar, “What troubles you?” (Genesis 21:17) Remarkably, the story tells us that God responds to baby’s cries rather than to Hagar’s initial cry. The angel reassures her that God has heard the voice of her child and promises that God will make “a great nation of him.” (Genesis 21:18)

Once the promise is made God opens Hagar’s eyes to see the well of water. In time Ishmael grows up and lives in the wilderness and becomes an expert with the bow and with the help of his mother he will marry someone from the land of Egypt.

The story of Abraham, Sarah and Hagar and Isaac and Ishmael is a troubling, yet powerful story. Amid the difficulty of Hagar and Ishmael being cast out, God’s own voice remains prominent.

An angel came to Hagar. Who will come to Elva? An immigration official? A politician? A minister?

We could easily join our voices with Sarah and out of jealousy and fear insist that Hagar and Ishmael be cast out. We could just as easily join our voices with those who see Elva, Angel and Dulce as “criminal scumbags illegals.” But their story, like Hagar and Ishmael’s story, reminds us that the God who watches over the history of all the nations – Israel and Egypt, Guatemala, Mexico, Honduras, El Salvador, Guatemala and the U.S. – also watches over the outcasts.

May God open all of our eyes and our hearts.