We went to the Hungry Lion after the evening service for a time of fellowship. The coffee shop was located on the corner of Nuʻuanu Avenue and South School Street in Honolulu. It was known for serving local food in huge portions and for its sports memorabilia. The restaurant closed its doors in 2010 after twenty-eight years of business falling victim to a decline in the overall economy of Hawaiʻi.

In more recent years reviews of the restaurant were not favorable. But at the time we were there not long after it first opened, the service and food were fine. The Hungry Lion was the place to go for a late evening meal.

I had gone to the service that night with an old friend. We were invited by members of the church to join them afterwards for fellowship and saimin.

I managed to sit between two members whom I did not know. We all exchanged the usual pleasantries introducing ourselves to one another and then turning our attention to the menu.

Once we ordered our food, a number of conversations began around the table. The person to my left introduced himself and we began talking. I told him about my growing up in Kona, that I was working in California and that I had just returned to Honolulu for a vacation.

What began as a normal conversation took an almost immediate turn as he began to speak. At first, I listened as though we were having a sensible conversation and then realized something was amiss.

“Okay,” I thought. “This is interesting.”

I was trying to make sense about what he was saying. The more I attempted to have him clarify things he was saying, the more incoherent he became until it was clear I had been drawn into his alternate universe. Just when it seemed we were never going to find our way back to the table, the person next to him asked in a matter of fact voice – “So, how are things going, Joe?”

In an instant he snapped out of what appeared to be a self-induced trance. “Oh,” he said, “not much.” The question may have seemed calculated but it was asked without fear and without judgment.

All it took was a simple question to change Joe’s focus. But by the time it was asked I felt I had already plunged headlong in a deep dark hole and it scared me.

Over the years I have come to appreciate those whose work is in mental health. When I was growing up in Kona we all knew about “Crazy Kay.” We would see her walking along the roadside dressed in white slacks and a white blouse with a white scarf. If it was a good day, her hair was in place and the bright red lipstick she used was carefully applied. If not, she would appear with hair disheveled and her lipstick smeared across her chin.

But we knew her. She was “Crazy Kay.”

Back then there were no diagnoses for someone who may have been manic-depressive or bi-polar or someone who suffered from attention deficit disorder. Instead we usually concluded that they were “crazy” or, God forbid, “possessed by demons.”

When Jesus meets a man who had his share of demons and more, he commanded them to come out of the man. We are told that the man had lived in torment for many years.

It is a curious thing that when the man sees Jesus, he falls down and shouts at the top of his voice, “I beg you, do not torment me.” But the man is already in torment so whose voice is it that we hear? 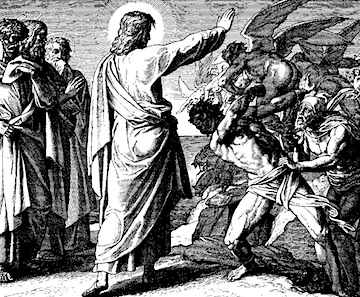 When Jesus asks the man his name, he replies “Legion” and the explanation is given “for we are many (demons).” We then understand that the “demons” themselves are afraid and they beg Jesus not to send them into an abyss but to allow them to enter a herd of swine.

The pigs and the pig farmers get the raw end of the deal. The pigs rush down into a lake and drown. The pig farmers lose their livestock. We are never told where the demons end up.

When pig farmers tell others in the city and countryside what had happened, the people come and find the man “clothed and in his right mind.” (Luke 8:35) One would imagine that everyone would be overjoyed so it is a great surprise when they respond to the man’s healing with fear.

In fact they are seized with such great fear they ask Jesus to leave them. It has been said that fear, by definition, is an unpleasant emotion caused by the belief that someone or something is dangerous and likely to cause pain or be a threat to one’s well being.

What was it that they were afraid of? Jesus restored the man to a right relationship not only with God but with others and with himself. It is evident from the story that he is no longer a danger or threat to others. As far as we know the demons may have met their demise when the pigs drowned.

Perhaps they would have rather lived out their days in broken relationships than in restored relationships. Or could it be that they were afraid that God would ask too much of them; that they would need to return to their homes to proclaim how much God and Jesus had done for them?

Perhaps they were afraid as we may be afraid whenever we feel the weight and burden of broken relationships. “My son does not deserve my forgiveness and love,” says an angry father. “How can I forgive him? He has squandered whatever I have given him.”

“My sister killed herself without regard for how we would feel,” laments a sibling. “It was such a selfish thing to do. Why would she do such a thing?”

“I hate myself and if you want to know why the reasons are legion.”

We are quick to judge others who are different. We are quick to condemn others who may not share our beliefs or even our opinions. These are all the demons that destroy our relationship with God, with one another and with ourselves.