I was here at the church the morning Hurricane ʻIniki moved along a horizontal path south of Maui. The Central Pacific Hurricane Center was tracking ʻIniki and the word was that it would continue along that path.

Despite what the Hurricane Center was reporting, I decided about midday it was time to go home. I was living in Kīhei at the time and on the drive back I was relieved to see the outer band of the hurricane in the distance.

As I drove by the beaches at Kamaʻole, I noticed crowds of people looking out over the ocean. The surge from the passing storm was evident. Huge waves were churning up the sand along the shoreline draining away what was usually a blue-colored ocean. 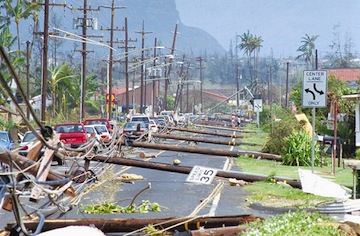 The hurricane moved along, quickly passing by Lānaʻi, Molokaʻi and Oʻahu but as it neared Kauaʻi it made a right turn north for a path straight over the island on the night of September 11, 1992.

ʻIniki - which means “strong and piercing wind” – was a powerful Category 4 hurricane. Over 8,000 residents were housed in shelters prior to ‘Iniki making landfall. In its wake, ‘Iniki left damages estimated at almost two billion dollars.

Nearly 1, 500 homes were completely destroyed, another 5,000 severely damaged, and another 7,000 sustained minor damages. Over 7,000 were left homeless after the storm’s passage.

Among those affected was a colleague who was serving as a pastor at a church in Kapa’a. Just the month before I had spent my vacation staying with my friend at his home above the Wailua River.

If you have been to Kauaʻi and visited the Fern Grotto located upstream from the river, you know that the area is beautiful. The river is fed by the waters of Waialeale and along the way there are two major waterfalls including Wailua Falls and Opaekaʻa Falls.

The drive to my friend’s home was along a ridge that overlooked Opaekaʻa Falls. When it became clear that ‘Iniki was to make a direct hit on Kauai, many us were fearful of the damage it would cause.

Following the storm, it was difficult to communicate with family and friends. The entire island lacked electricity and television service for an extended period of time. Although some service was restored within four weeks, many other areas were without power for three months.

A few deaths were attributed to the hurricane, including someone struck by debris. Another lost her life when a portion of her home collapsed and offshore, two visitors died when their boat capsized. Numerous injuries were also reported.

“Are you okay, Kahu?” I asked after I was finally able to get in touch with him.

His bath tub was located in a second bathroom in the middle of the house.

“I could hear the wind and the rain when the hurricane made its way over Wailua,” he continued. “When I went outside the next morning, portions of the roof of my house were gone. But the section above the bathroom remained intact.”

He went on to talk about his neighbors, some whom I had met earlier during my visit. Many of their homes were severely damaged with entire roofs torn away.

It was hard at the time to know if the questions I was asking were out of concern or curiosity, but it quickly became apparent that beyond the “facts” there was the one overriding “feeling” about what had occurred – fear. It was fear perhaps not unlike what the terrified disciples felt that day when they were with Jesus in “a frail storm-tossed boat.” (Feasting on the Word, Year B, Volume 3, Bartlett & Taylor, Westminster/John Knox Press, Louisville, Kentucky, 2009, page 164).

The Rev. Michael Lindvall is the Senior Minister at Brick Presbyterian Church in New York City. “We are afraid of the ‘wind and waves’ that assail our fragile vessels, our lives, our churches, our cities, and nations. We fear disapproval, rejection, failure, meaninglessness, illness and of course, we fear death – our own death, the death of those we love, and the potential demise of the communities we cherish.” (Op. cit.)

Rather than simply look upon what happened to Jesus and the disciples that day on the Sea of Galilee as “an ancient natural miracle story,” (Op.cit.) we would do well to reflect on the ways in which fear and faith are a part of our own lives. What makes the story significant is the way in which Jesus acknowledges and confronts the fear of the disciples.

Yet we know that it is Jesus who calms the storm and it is Jesus who seeks to reassure them that all will be well. He invites them – and us – to turn again to the One who is Lord of the wind and wave – to place our trust in the One more powerful than the storm upon the Sea of Galilee and the storms that may rage in our own lives. (Op. cit.)

Jesus never says, “There is nothing to be afraid of.” He does not deny their fear or our own fears. Instead, he asks, “Why are you afraid? Why are we afraid? Have you still no faith? Have we still no faith?” (Mark 4:40)

Lindvall re-emphasizes the point by noting, “ʻthere’s nothing to be afraid of’ is a very different thing from saying, ‘do not be afraid.’” (Ibid., page 166) Our fears are real and they affect us in profound ways.

I wound agree with Lindvall when he asserts that “as we grow in faith, we come to understand that even though . . . fearsome things are very real, they do not have the last word.” (Op. cit.) The proclamation of the good news of Jesus Christ reminds us that at the time of his birth, the angels sought to reassure the terrified shepherds on the hillside, “Do not be afraid.” (Luke 2:10) Following Jesus’ death, the angel sought to reassure the terrified women who returned to find the tomb where he was laid – empty. “Do not be afraid.” (Matthew 28: 5) “Do not be alarmed.” (Mark 16:5) 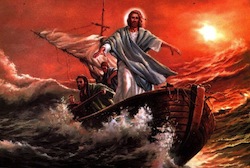 Lindvall recalls a scene near the end of John Bunyan’s classic allegorical novel The Pilgrim’s Progress that bears repeating. The chief character Christian struggles to lead a life of faith. As he comes to the end of his journey, he must cross a river. It is a great and fearsome river and he is afraid.

Together with his friend Hopeful, they wade into the waters with great fear. Christian cries out, “I sink in deep waters; the billows go over my head, all his waves go over me.” Hopeful replies with great calm, “Be of good cheer, my brother, I feel the bottom, and it is good.” (The Pilgrim’s Progress, John Bunyan, 1678, page 1, section x)

My friend’s home above the Wailua River was repaired and he lived there for several more years before being called to serve a church on the island Oʻahu. The river and falls are as beautiful as ever.