"Do you not care that we are perishing?"

There is a clothing company here in Hawaiʻi centered on the word or phrase “Ainokea”, spelled a-i-n-o-k-e-a. “Ainokea” serves as the brand name for its inventory of tee shirts, baseball caps, stickers, accessories and other products. 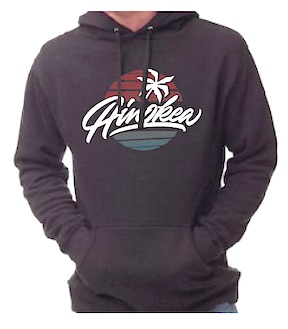 It is a word that originated as a form of Hawaiian slang intended to resemble a Hawaiian word. When pronounced phonetically in Pidgin English, it sounds like this: “I no care” or in standard English, “I don’t care.”

It was a clever marketing ploy meant to convey an island lifestyle that is free from worry, relaxed and casual in style and manner – a lifestyle that makes sense when someone tried to explain its meaning and intent by telling the story of what happened when a group of friends were deciding one evening where to go for dinner. Someone asked in Pidgin English, “So, whea you folks like go eat?” The response was – “Ainokea” – meaning “it’s all good, wherever we decide to go.”

Ainokea, someone added, is also about being carefree, laid back, easy-going.

But for others, ainokea can also be shorthand for all kinds of social ills. Some argue that ainokea is about lack of respect and being self-centered. Others say it is about social indifference; a lack of empathy; a loss of aloha. It prompted a local pastor to print a tee shirt he wore one Sunday while giving the morning sermon with the letters a-i-k-e-a or “Aikea.”

One of the basic properties of words is that they are polysemous. A word – in this case a word that is actually a phrase - can have many meanings. That might be said of the tee shirts blazoned with the word or phrase ainokea or a jacket made by the Zara, the Spanish fashion retailer based in Spain, with the phrase, “I really don’t care, do u?” 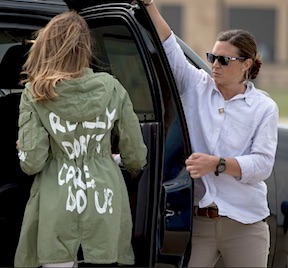 The jacket worn by the First Lady of the United States late this week as she boarded a flight to visit a detention center in McAllen, Texas for immigrant children who had been separated from their parents caught the attention of many. According to the communications director for the First Lady, the decision to wear the jacket had no meaning. “It’s a jacket. There was no hidden message.”

In one regard, one would be able to say that that was true. There was no hidden meaning. Nothing was hidden. It was right there for the whole world to see.

At best, it would be hard to imagine that the message was we should all stop worrying about the detention centers and ease up a bit about crying babies and children separated from their parents and “phony stories of sadness and grief.”

The babies are fine. The children are fine. They have a roof over their heads and three meals a day. They get to attend school and have time to play. How ungrateful can the immigrant parents breaking our laws be, knowing that their son or daughter has the benefit of free room and board for 20 days, if not longer. But at its worst, it may mean that we have become a nation of “mean” people – indifferent to the plight of others and lacking in empathy and having no aloha.

Long, long ago in a place far, far away – not in a distant galaxy – but on the other side of the world, a group of men gathered around Jesus on the shores of the Sea of Galilee and wondered about whether or not he cared about them.

They took him with them in a boat because Jesus said, “Let us go across to the other side” (Mark 4:35-41). While crossing over, a great windstorm arose. The waves beat into the boat and it appeared certain that the boat would sink.

Jesus woke up and rebuked the wind saying, “Peace! Be still!”

The wind immediately ceased and there was a dead calm.

Jesus said to them, “Why are you afraid? Have you no faith?”

Filled with awe in what they had just witnessed, they said to one another, “Who is this Jesus, that even the wind and sea obey him?”

But why such awe? Why would they have been surprised by what Jesus did? It would seem that they were just beginning to see and understand Jesus with each passing day. As disciples, Jesus’ identity is still unclear to them and their faith in him is uncertain.

Going across to the other side of the Sea of Galilee was more than simply a change of location. The “other side” represented Gentile territory.

Jesus’ decision to go into a foreign region, crossing a border is deliberate. He lays his claim that his mission is not only to the Jews. It is also to the Gentiles.

“Jesus reaches out to the strangers, the others, even enemies of the house of Israel. If Jesus stands as the example of the church today, this story raises for us the question, who are the strangers, the others whom we have neglected? Who are the people and where are the places left untouched by [our] Christian hospitality due to ancient [and current] hatreds and fears?” (Feasting on the Word, Year B, Bartlett & Taylor, Westminster/John Knox Press, Louisville, Kentucky, 2009, pages 165, 167).

As the disciples cross over the Sea of Galilee with Jesus, the world around them becomes an “enormous storm of wind, wave, and rising water. Jesus is asleep, the picture of quiet confidence in the power of the God who made both land and sea – images and themes [we recall in The Book of Jonah: a ship, a storm and the one person on board who trusts the Creator God asleep.” (Preaching Through the Christian Year B, Craddock, Hayes, Holladay & Tucker, Trinity Press International, Harrisburg, Pennsylvania, 1993, page 320).

The disciples are filled with fear.

The Rev. Dr. Beverly Zink-Sawyer, Professor Emerita of Preaching and Worship at Union Presbyterian Seminary in Richmond, Virginia points out: “The particular word spoken [in our scripture reading]is a word of peace and stillness. It is a word we need to hear every day of our lives” (Feasting on the Word, Year B, Bartlett & Taylor, Westminster/John Knox Press, Louisville, Kentucky, 2009, pages 169).

There are those who thrive on chaos but only for a time because in the end, they and we all yearn for a word of peace. Zink-Sawyer adds: “Like the disciples, we are challenged in the midst of . . . [the] storms [in our lives] to rediscover our faith in the promise of God’s powerful word. The question Jesus poses to the disciples is the question he continues to pose to us in our moments of despair: ‘Why are you afraid? Have you still no faith?’ (Mark 4:40).”

In the moment when Jesus responded to the disciples, they did not know that they were in the presence of a power greater than the storm. The writer of The Gospel According to Mark reminded those in the early church and he reminds us today that the power of God is not in strength and might but always in love.

In the midst of a troubling storm, Jesus would not have dismissed the disciples by responding to their question by saying, “Ainokea” nor would he have responded by telling the disciples, “I really don’t care, do u?”

Jesus demonstrated that he did care with three words: “Peace! Be still!” Amid the many storms that trouble us today, such words remind us to have faith in the Ine who made heaven and earth so that our hearts may be open wide to welcome the stranger.