When I lived in California between 1975 to 1991, I had opportunities to visit different cities across the country including Seattle; Portland, Maine and Portland, Oregon; Boston and Cambridge; New York City and Rochester, New York; New Brunswick and New Orleans; San Antonio, Dallas-Fort Worth, and Houston; St. Paul-Minneapolis; Durham-Raleigh; Chicago and Cleveland, and many others. Arriving by air, I always made a point to get to my destination by public transportation and often it was by rail. 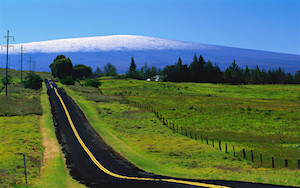 Now for someone like me, born in the kuahiwi or mountain area of Kona, we were considered kuaʻāina – folks from the countryside. Because we were kuaʻāina, it was assumed that we were a less sophisticated, more backward in our thinking than our cousins from the big city - Honolulu.

I am not sure what compelled me to strike out on my own whenever I travelled to a new city. But I decided that I would always make the effort to find my way to my destination in each city. It may have been my own sense of adventure. Or perhaps it may have been my kuaʻaina pride.

Whatever the reason, I learned very, very quickly that my own sense of direction was very different having grown up in Hawaiʻi. As far as living out in the country, there were only two directions - mauka and makai, the mountain or the ocean – or in the city of Honolulu, it was always Ewa and Diamond Head.

No need for street numbers or street names – a mango tree, a rock wall, a hill – that was all I needed to find my way on any island. But on a continent – mauka and makai – made no sense. North, south, east, west and street names and street numbers, lots of them, meant that each time I would find myself navigating the streets of a city without the mountain or ocean as a guide or Ewa to the West and Diamond Head to the East to help me find my way.

It wasnʼt that I was ill-prepared. I looked at rail and subway maps and studied them carefully. I knew enough how to get to the stop along the train route, but the trick was figuring out which way to turn once I made my way from the subterranean tunnels of the city up into the daylight at street level.

The first time I got off the train in Chicago, I had two options – I could go either to the right or to the left. I confidently turned right and knew within a city block that I had made the wrong decision. As confusing as it would sometimes get, over time I did manage to get better at finding my way through whatever city I set my eyes upon.

Sometimes being a disciple – a follower of Jesus – can be disorienting. I would often lose my way going in one direction and then another. It was a challenge growing up in the church. I was told that Jesus loved me and died for my sins – although I wasn’t quite sure what my sins were and if I had a little or a lot of them. I learned soon enough that if I didn’t accept Jesus into my heart that I would suffer the punishment of going to hell after I died.

What initially seemed like an option was not an option. Why would anyone intentionally choose to go to hell?

So I accepted Jesus into my heart and decided I would become his follower without fully knowing or understanding what that meant. As I grew up, the Jesus I knew as a child had become many things to many different people. It seemed like everyone was intent on following a Jesus who had their best own interests in mind and a Jesus far less interested in the well-being of others, especially if they were different.

Grace and mercy for ourselves? Why not? Forgiveness? Yes!

As for others, no grace or mercy, just condemnation. No forgiveness, only the punishment of a vengeful and jealous God.

Compassion and love? Yes, but not for the unrepentant.

As the years went by, it became more and more difficult to know which Jesus to follow. Was it the Jesus cloaked in a white sheet burning a wooden cross or the Jesus in pigtails attending Sunday School in the basement of a Baptist church before a bomb exploded?

Was it the Jesus holding signs and placards of condemnation at memorial services for soldiers who died in combat in Afghanistan or Iraq insisting that they died for the sins of the nation or the Jesus who was “crucified” on a fence in the Wyoming countryside for being gay? Was it the Jesus turning away those seeking refuge or the Jesus welcoming the stranger?

In our reading from The Gospel According to Luke, Jesus sets his face toward Jerusalem, warning those who would follow him that such a commitment comes “wrapped in the demands of drastic obligations.” (Preaching Through the Christian Year, Year C, Craddock, Hayes, Holladay & Tucker, Trinity Press International, Harrisburg, Pennsylvania, page 312). It is a commitment not to be taken lightly.

James G. Kirk, a theologian, writes: “To follow Jesus implies certain things. It may mean forsaking security in order to go where Jesus calls; decisions may need to be made now rather than after personal affairs are transacted; once you make the choice, there is no looking back. Discipleship means today what it meant when Jesus walked: choose this day whom you will serve.” That’s it! (When We Gather: A Book of Prayers for Worship, Year C, James G. Kirk, The Geneva Press, Philadelphia, Pennsylvania, 1985, page 94)

As Jesus set his face to go to Jerusalem, we recall that his journey was preceded by his baptism, an event filled with prayer and a voice from heaven acknowledging that he was God’s “Beloved Son.” (Luke 3:21-22) Our reading this morning is prefaced by Jesus’ transfiguration, an event also marked by prayer and a voice from heaven acknowledging he was God’s “Chosen Son.” (Luke 9:28-36)

The first event began with a rejection in Nazareth (Luke 4:16-30) and the second, with a rejection in Samaria (Luke 9:51-56). But neither rejection deterred Jesus from his ministry. Instead, they set the stage for what was to become an even greater mission to the whole world.

Luke makes clear in his account of Jesus’ journey to Jerusalem that the life of discipleship is a pilgrimage. If we choose to follow in the direction of that pilgrimage we can expect to share the fate and faith of Jesus.

Jesus set his face toward Jerusalem and there was never any question that he would find his way to the city. No need for directions - mauka or makai, Ewa or Diamond Head, just a straight path to Jerusalem.

In finding his way to the city, he would “complete the task of his earthly ministry” and “move toward the end of his larger assignment for the salvation of humanity.” (“Reflections on the Lectionary,” LaDonna Sanders Nkosi, Christian Century, June 8, 2016 page 21) Like James and John, we may want to call down fire upon others. But that was not their purpose nor is it our purpose.

“Jesus tells them so. They are there to bring life, not death.” (Op.cit.) James, John, and the other disciples are to go out “to preach the kingdom of God and to heal the sick.” (Luke 9:1)