Kākou - “we” in Hawaiian is understood be inclusive of others - not exclusive as in ‘oukou (you) or mākou (us), but kākou.

One day Jesus crossed the Sea of Galilee and performed an extraordinary exorcism among Gentile swine keepers on its eastern shore (Mark 5:1-20). Then he crossed back to the western shore where he encountered a Jewish man and a Jewish woman in desperate need of healing. 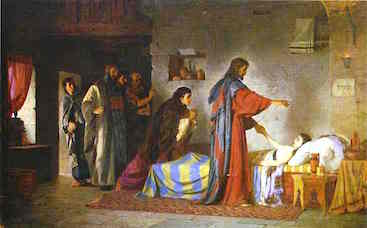 The man named Jairus was a ruler of the synagogue whose daughter was at the point of death. The unnamed woman, according to Jewish law, was unclean because of her bleeding and no less desperate to be healed. Both stories in our reading from The Gospel According to Mark are arranged in such a way that we are compelled to acknowledge that Jesus responded to each “without partiality, Jew and Gentile, near and far” (Preaching Through the Christian Year B, Craddock, Hayes, Holladay & Tucker, Trinity Press International, Harrisburg, Pennsylvania, 1993, page 328).

The woman had no options, no resources, no one. After having heard about Jesus, she was convinced that it would be enough for her to touch his clothes in order for her to be made well.

The girl who was gravely ill died as Jesus was making his way to the house where she lay. Her father was convinced she would also be made well if Jesus came and laid his hands upon her.

Amid Jairus’ desperation and the desperation of the unnamed woman, there is the confusion of being surrounded by so many people – the crowd gathered outside the Jairus’ home and the crowd through which the woman stretched out her hand to touch Jesus clothes. No one in either crowd seemed to know what was going on.

At the house there was only weeping and wailing. Jesus questioned the commotion they were causing and immediately informed them that the girl was not dead but sleeping. One would think that would have infuriated the crowd but oddly enough they laughed at him.

“You must be kidding? We know death. She is dead. She is gone.”

It may be enough to say that the stories are about how Jesus showed no partiality between Gentiles and Jews, near and far, clean and unclean. But a closer look at both stories in our reading reveals some striking differences that deepen the significance of what Jesus did. We see in other ways how Jesus showed no partiality in responding to Jairus’ plea or the woman’s determination.

Something even more profound occurred in both stories. The actions taken by the Jairus and the woman required that they each risk reaching out beyond themselves.

Jairus was a “leader of the synagogue.” As such he held a position of status in the community. The woman who suffered from a hemorrhage had been rendered unclean. She was an outcast in the community.

Jairus approached Jesus with a crowd following him. The woman came alone.

The unnamed woman was already separated from her family and village. She risked further isolation because she had the audacity to act on her own behalf no matter the cost. For Jesus, her audacity is the measure of her faith.

Beyond showing no partiality whether Jew or Gentile, near or far, clean or unclean, Jesus also showed no partiality on based on status or age - whether rich or poor, young or old.

While we may have cause to rejoice that the unnamed woman and the unnamed girl are healed, we also know that despite all of Jesus’ miracles countless others were not healed. Jairus’ daughter was raised, but other children died and in time his daughter would also die.

The woman plagued and tormented by illness for years had her health restored, but others were not physically healed and in time she would also die.

We long for God to hear and to grant our prayers for healing. Yet we know our prayers are not merely “a matter of bending God’s divine will toward our own will, our own needs, our own hopes.” (Feasting on the Word, Year B, Volume 3, Bartlett & Brown, Westminster/John Knox Press, Louisville, Kentucky, 2009, page 190) Instead, our prayers are about entering into a deeper relationship with God.

The Rev. Michael L. Lindvall is a Presbyterian pastor. He reminds us that when we pray, “God’s mind may or may not be changed, but I – my mind and heart – may be” (Op. cit.) What we can affirm in both stories and apply to our own lives is that “beyond even physical healing, acceptance, intimacy, and touch can makes us whole and give us peace” (Feasting on the Word, Year B, Volume 3, Bartlett & Brown, Westminster/John Knox Press, Louisville, Kentucky, 2009, page 192).

In mid-May, Kahu Danette Kong, a member of our church and a chaplain at the Maui Memorial Medical Center, was granted a privilege of call through the ‘Aha O Nā Mokupuni ‘O Maui, Molokaʻi ame Lānaʻi of the Hawaiʻi Conference – United Church of Christ. The mokupuni is an association of all of our member churches on Maui, Molokaʻi and Lānaʻi.

An Ecclesiastical Council was called on May 16, 2015 to examine Kahu Danette for the purpose of determining her fitness for ministry in and on behalf of the United Church of Christ of which our church is a member. Kahu was invited to make a presentation based on her spiritual journey. She chose to trace her journey of faith through story and music.

Among the stories she shared was her work as a patient representative for the Medical College of Georgia for persons with AIDS in the 1980’s. It was during a time when there was great fear among the general public and among health care professionals about the transmission of the disease.

Kahu had already done an internship as a hospital chaplain and was aware that those caring for persons with AIDS were instructed to wear full protective gear. She decided that if she was going to be effective in her work, she would have to forgo wearing the protective gear. She spoke with her supervisor and was granted permission to set the gear aside.

She recalled the day she walked into a patient’s room and introduced herself as the chaplain. She offered the touch of her hand to a young man named Paul.

Paul had been accustomed to meeting others who were paradoxically near and distant at the same time as they peered out of protective head gear and as he peered in to see their faces. It was the first time since his hospitalization that someone in the entire hospital touched him.

“That broke my heart for him,” Kahu said, “and it will always be a reminder to me of the importance of human touch.” Over the weeks that followed she would come to know him well.

In the year that followed, Kahu met another patient named Larry when she began her residency as a hospital chaplain at Queen’s Medical Center in Honolulu. She would come to know Larry as well as his partner John.

In time, both Paul and Larry succumbed to the disease. They were not healed of AIDS but they were healed in other ways because of Kahu's acceptance, intimacy and touch.

It was her touch that brought wholeness and peace to their lives. She responded without partiality. Like Jesus, like Kahu Danette, we too are called to share God’s healing touch without partiality – that is what we do.

Kahu remembered Paul and Larry as remarkable, courageous young men. In a tribute to them, she wrote and composed a song. The piece was originally published for Soprano, Alto, Tenor and Bass voices but more recently she rearranged the song for men’s voices.

Give us faith, give us grace and light and peace
and help us walk, as you would have us walk,
with one another, O Holy One, within your love.