“Picking Up the Mantle”

Twenty-three years ago on June 30, 1990 I sat on the floor of the Oakland Coliseum surrounded by 58,000 people who had come to see and to hear Nelson Mandela speak. Mandela ended a grueling eight-city American visit in Oakland, California. He had just been released from 27 years of imprisonment for seeking an end to apartheid in South Africa. 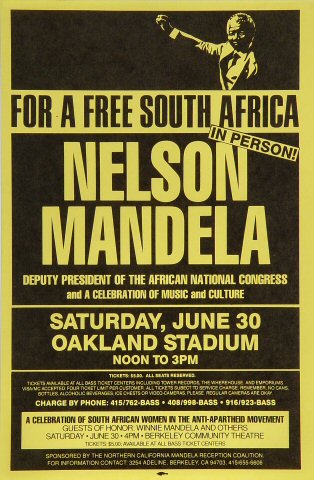 As I walked across the overpass from the BART train to the coliseum I marveled at the mix of humanity – men and women, young and old, boys and girls, the disabled, single-married-divorced, those who were a part of the LGBT community, persons of every color as well as persons of different religious beliefs and traditions and political affiliations. We were there that day and understood Mandela when he said, “We are at a crucial historical juncture” – not only for South Africa but for people everywhere.

We understood that unless we were all free, no one was free.

In one sense Mandela’s vision was more religious than political. We tend to equate democracy with the kingdom of God. There is freedom and equality in the kingdom of God. But that is not something that we can easily say of most, if not all of the nations of the world – whether the nations see themselves as democratic, socialist, communist or another ideological persuasion.

South Africa may now be the exception. There is worry that Mandela’s death may lead to an unraveling of that vision of freedom and equality.

During the community forum that we hosted here at the church on June 15, 2013 with the Rev. Dr. Allan Boesak of South Africa and Toni Bissen of the Pūʻā Foundation based in Honolulu, a concern was raised that Mandela’s death might lead to the collapse of democracy in South Africa. Boesak is a colleague of Mandela's. He expressed his debt and gratitude for Mandela’s leadership through the critical years following the dismantling of apartheid and then went on to say that the people of South Africa will go on.

The freedom of all South Africans has come at a great cost. No one is about to let that slip away.

Still the concern about what will happen once Mandela is gone remains. We are all bound by time to the present. The past cannot be recovered and the future is not yet available.

What then are we to do when faced with the uncertainties of the future? It is a dilemma that Elisha must face as the successor to the prophet Elijah. In our reading from the Second Book of Kings we learn about the imminent departure of Elijah.

Elijah was a prophet of Israel during the reign of kings Ahab and Ahaziah in the first half of the ninth century BCE. He spoke out against the injustices that he saw among the religious and political authorities of his day.

We learn that God has been present throughout Elijah’s ministry but the future is not so clear. An era is coming to an end. Elijah, Elisha and the company of prophets all know that change is on the way.

The concern is whether or not God will allow the work that was done by Elijah to continue. As a protégé and successor to Elijah, Elisha responds to news of Elijah’s departure with great fidelity. He is loyal to Elijah and refuses, on three occasions, to leave him.

When they cross the Jordan, Elijah asks Elisha what he may do for him. Elisha requests a double share of his spirit (2 Kings 2:9) to signify that he is the true heir. (Deuteronomy 21:17)

Elijah responds by telling Elisha that he will have to rely on God for whatever portion he receives. To be a prophet means that Elisha must be absolutely dependent on God’s grace and mercy. That may be why Elijah initially responds to Elisha by saying his request to receive a double share is “a hard thing.” (2 Kings 2:10) Elijah admits that granting such a request is not something he is able to do.

Elisha reminds us that we must rely on God’s grace and mercy. We must trust that there will be voices like his and Elijah’s who will remind us of the challenges we face in our own day and time. Like Elijah, Elisha will also speak out against the injustices of his day.

If there is a lesson to be learned it is that we must rely on God’s grace and mercy if the vision of freedom and equality is to be fully realized. In his letter from a Birmingham jail dated April 16, 1962, the Rev. Dr. Martin Luther King, Jr. wrote: “Freedom is never given by the oppressor, it must be demanded by the oppressed.”

That quotation appears on a plaque across from the Maui County Building on High Street in Wailuku. The struggle for freedom in the United States and in South Africa is the struggle of people everywhere.

What then are we to do when faced with the uncertainties of the future? Again, we must rely on God’s grace and mercy. We must trust that there will be voices like Elijah and Elisha who will remind us of the challenges we face in our own day and time. We too must pick up the mantle from Elijah to Elisha to Jesus and to us and future generations.