So it was not the best week in my life. I was at my computer when I heard someone come in the front door of our office.

After exchanging “hellos” with our office staff, I could overhear a woman’s voice asking, “Is the priest in?”

Without attempting to correct the person, I overheard one of our office staff saying, “Well, Kahu, our pastor is here. Let me check with him to see if he is available.”

I needed a minute to finish up some work and so our staff invited her to sit on one of the pews outside our office door. I stepped outside soon afterwards and saw that she was seated on the pew and in front of her stood a young man.

She introduced herself and then her son whom she said was 19 years old.

He looked fine – at least at that moment. She looked physically and emotionally worn out. I asked who it was that I was seeing thinking it was her. 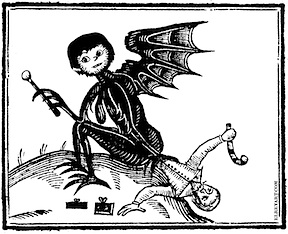 She then proceeded to tell me about how her son began acting out earlier in the day. She mentioned that he had become agitated. I am not sure where they were or when it happened. But she said, “We were in the jungle and he threw a knife in my direction.”

She continued, “I guess you’re seeing me and him but I don’t know if you will be able to talk with him. He doesn’t talk.”

I tried. He didn’t talk.

When she said this her son began laughing, not uncontrollably, but consistently throughout our conversation. “He does that all time when he shuts down,” she said, “He just starts laughing.”

“I asked someone we met if they knew anyone who was a spiritual healer and they told me to come here,” she added.

As I looked at her son he seemed far from demonic. He did not seem to be on any drugs.

“He’s been diagnosed schizophrenic and bipolar,” she explained. “We’ve seen others who tried to help. But I don’t want him on any medication.”

“I need to tell you I do not have the skill or spiritual gift to deal with whatever is going on with your son.” The more I tried to let her know that I was not going to be able to help her or her son, the more she kept wanting to say more.

“Well, can you tell about someone else I could talk to?”

“Those that I know are all gone now,” I said. “Papa Kaʻalakea is gone and other healing practitioners like Kalua are gone. I don’t know anyone I could recommend.”

“We came all the way from the East Coast hoping we could find someone. We are here a few more days and then we will be going to Honolulu.”

We said a lot more to each other. It was that kind of conversation. Very quickly, it began to feel like a big hole was opening in the ground and the more we talked the bigger the hole got and it felt like were slipping into the puka.

“Well, if you think of someone let me know.” Then she wrote down her name and telephone number on a piece of paper and gave it to me.

I watched them as they left walking across the church lawn and realized in that moment that I was exhausted. It did not occur to me until the following day that the least I could have done was prayed with her and her son for his healing.

Yet, I struggled with knowing that sometimes not all of our prayers are answered as we pray them. The two healing stories that come to us from our reading from The Gospel According to Mark raises the question for all of us when we look at our own lives. “Will I be healed?”

It is a question raised by Michael Lindvall, the Senior Minister of Brick Presybterian Church in New York City. (Feasting on the Word, Year B, Volume 3, Bartlett & Taylor, Westminster/John Knox Press, Louisville, Kentucky, 2009, page 188) In recent years I have had my share of physical ailments.

For others of us, our ailments may be physical, mental, spiritual or emotional. We all long for healing. We pray for healing knowing that some are healed and some are not. 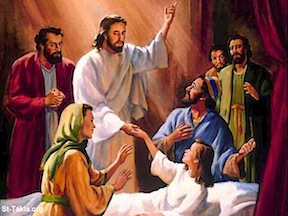 It is true that Jairus’ daughter was healed. It is also true that other children died and in time that she would also die. It is true that the woman plagued by years of illness was restored. But other women and men were not.

Some of you have heard me tell the story many years ago of a woman in our congregation who was dying of cancer. Over a period of several months, we prayed that God would heal her.

By year’s end she died. There were some who may have been angry because God did not heal her. But others saw how - in the waning moments of her life - she accepted and embraced the journey towards her own death.

Lindvall tells the story of a friend who was diagnosed with Parkinson’s disease when he was still in his fifties. He and his wife prayed that he might be healed. Twenty years later, he is in the last debilitating stages of the disease.

It is a lesson that comes with great difficulty for many of us because we are inclined to want to bend the will of God toward our own will, our own needs, our own hopes. We may do much better in acknowledging that our prayers, our asking something of God is what draws us into a closer and deeper relationship with God. (Op. cit.)

In other words, we may not be able to change God’s mind when we pray, but our minds and our hearts, may change. (Op. cit.) I know that the woman who brought her son to the church was no less desperate than Jarius when he brought Jesus to his daughter.

The compassion Jesus demonstrated toward the woman and the girl were as significant as their healing. As for the woman who came to talk with me about her son, I felt incapable of doing what she had hoped for.

But now I also realize that there were other things I could have done. The other healing story in Mark’s account is of a woman plagued with an illness. Her condition is exacerbated by the reality that she has been socially isolated and alienated from those around her. I imagine the woman who came to the church this week would say the same of her son – that he has been socially isolated and alienated from others.

The woman who touches Jesus’ cloak came up from behind him. She knew well enough that others would take great offense at what she did.

Remarkably, Jesus does not accuse her of being “unclean.” Instead he calls her daughter and in that way she becomes as significant to him as Jarius’ daughter. Instead of chastising the woman in front of everyone for her audacity in touching him and instead of being angry at her Jesus said , “Daughter, your faith has made you well; go in peace, and be healed of your disease.” (Mark 5:34)

Last night, I prayed for a desperate mother and a lost son. That is as much as I can do for now.