"Living a life of service"

I was told not too long ago that someone stopped coming to church because “things were getting too political.” Noting more than that was said and so there was not much I could say in response. 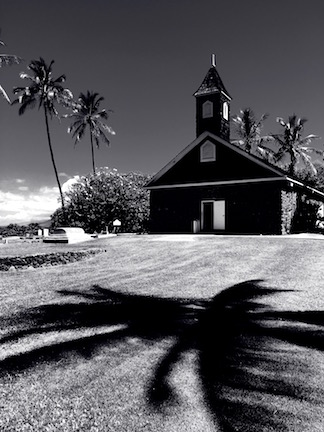 Ironically, there is a move afoot by some politicians in Washington D.C. to open the way for pastors and preachers to endorse political candidates from the pulpit. “Churches should have the right to endorse political candidates and still keep their tax-free status” is the thought of those targeting a law that prohibits such outright politicking from the pulpit. (The Maui News, Saturday, July 1, 2017, A8) Proponents of the change argue that it is a matter of free speech.

It may be that a day will come when I will be free to tell you who to vote for in an election. Personally, I would say any political endorsement from this pulpit or any pulpit would be a mistake. The challenge we face as Christians is whether or not we will have the courage to speak out, not for or against any politician, but against any policy that may undermine or threaten the well-being of the poor, marginalized, or disenfranchised.

How do we connect what we believe when we gather as people of faith with how we live in the world? That is our kuleana, our responsibility as people of faith, regardless of our political affiliations. It is our kuleana to give voice to whatever issues we may have about health care, the environment, LGBTQ concerns, voting rights, the media, guns, immigrants and refugees.

Like the early disciples, we are in the world but not of the world. Like them, we are also sent into the world, called and challenged to live a life of service in a world with which we are often at odds.

The Apostle Paul recognized that call and challenge in his letter to the Romans. “I appeal to you therefore, brothers and sisters, by the mercies of God to present your bodies as a living sacrifice, holy and acceptable to God, which is your spiritual worship. Do not be conformed to this world, but be transformed by the renewing of your minds, so that you may discern what is the will of God – what is good and acceptable and perfect.” (Romans 12:1-2)

A few weeks ago, lay and clergy delegates gathered on the campus of the Kamehameha Schools campus in Pukalani for our 195th ʻAha Paeʻaina or annual meeting of the Hawaiʻi Conference – United Church of Christ. They came from member churches located on Kauaʻi, Oʻahu, Molokaʻi, Lānaʻi, Hawaiʻi island as well as here on Maui. A resolution on “Encouraging Immigrant Welcoming Congregations” was sponsored by Church of the Crossroads in Honolulu.

After some discussion, the resolution was adopted. It urges churches to become “Immigrant Welcoming Congregations.” Those presenting the resolution pointed out that “our Jewish and Christian traditions honor the text from Leviticus 19:33-34: “When an alien (or immigrant) resides with you in your land, you shall not oppress the alien. The alien who resides with you shall be to you as the citizen among you; you shall love the alien as yourself, for you were aliens in the land of Egypt. I am the Lord your God.” (Leviticus 1(:33-34) Those presenting the resolution also pointed out that Jesus speaks of those who will be received into the kingdom of God in this way: “When I was hungry, you gave me something to eat, and when I was thirst, you gave me something to drink. When I was a stranger, you welcomed me.” (Matthew 25:31-46)

Needless to say those of us who are kama‘āina or long-time malihini residents have always known that Hawai’i is an immigrant welcoming state. For almost two centuries Native Hawaiians have welcomed newcomers. Some may say they did so with some reluctance but the fact is we have all become a part of each other’s lives through the places we work, play, study and worship and by marriage through our own families.

Our reading from The Gospel According to Matthew, challenges us “to think more deeply about what is meant by welcoming one another. It is only after doing so that we discover the reward that comes from the deep hospitality found in God’s welcome of us.” (Feasting on the Word, Year A, Volume 3, Bartlett & Taylor, Westminster/John Knox Press, Louisville, Kentucky, 2011, page 188)

The Rev. Dr. Emilie Townes is an American Baptist minister. She is currently serving as the Dean of Vanderbilt University Divinity School in Nashville, Tennessee. Of our gospel reading this morning, she said, “our . . . focus is on compassionate welcome or hospitality as a form of service to Christ.” (Ibid.)

Would we consider ourselves an “Immigrant Welcoming Congregation” in light of the readings from Leviticus and Matthew? Or would we think that would too political?

Would we consider ourselves an “Immigrant Welcoming Congregation” in light of our own mission statement – “e heahea akula me ke aloha i nā lahui a pau i ko mākou ʻohana – we welcome all, love all, and accept all into our ʻohana,” into our church family or would we think that was too political?