Alakaʻi Paleka is known as the Morning Goddess on KPOA 93.5 FM – Hawaiian Music, Maui Style. She is a member of Pāʻia First Hawaiian Protestant Church and a good and dear friend to many in our church family. All week long she has been reminding us that she will be broadcasting from Front Street in Lāhainā tomorrow - the only place on the island where there will be a Fourth of July fireworks celebration. I imagine many are probably thinking more about the fireworks this morning than about God’s continuing providence in our world. 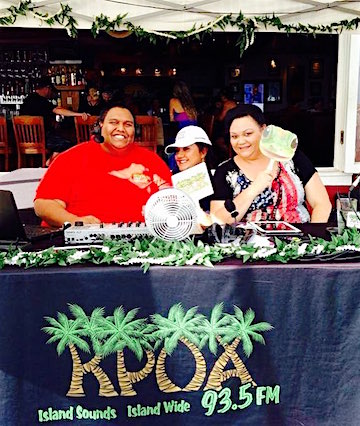 The Fourth of July was not designated as a federal holiday until 1941. Prior to that, the tradition goes back to the 18th century and the American Revolution (1775-1783).

On July 2, 1776 the Continental Congress representing the 13 colonies met. Two days later on July 4th, delegates voted to adopt the Declaration of Independence, a document that was drafted by Thomas Jefferson.

As Americans in the U.S., we tend to view the Fourth of July as an opportunity to equate our nationhood with the kingdom of God – “God and country” – and to view ourselves as God’s chosen people. Our reading from The First Book of Kings serves as an antidote to any patriotic zeal that may blind us from seeing a God for whom there are no borders.

You’ve heard of “Doctors Without Borders”, the international humanitarian organization established in 1971 known for its work in war-torn regions of the world and in developing countries facing endemic diseases. In 2015 alone, over 30,000 volunteers provided medical aid and care in over 70 countries.

As human beings our inclination is to find comfort and security in our tribal loyalties. Our tendency to create nation states reflects, in part, those tribal loyalties. Yet in many ways they are often created at the exclusion of others who may be of a different “tribe.”

For me the story of the healing of Naaman, the Aramaen, could easily be dubbed “God Without Borders.” The story of Elisha’s healing of Naaman may seem straightforward and simple enough but the events that unfold occur on several different levels. (Preaching Through the Christian Year C, Craddock, Hayes, Holladay & Tucker, Trinity International Press, Harrisburg, Pennsylvania, 1994, page 321)

It begins in Syria and the main character is not Elisha but Naaman, a commander of a powerful army who is highly regarded by the king of Aram. Naaman is stricken with leprosy and appears to be at a loss about what to do.

A young girl captured in Israel on one of the army’s raids informs Naaman’s wife of a prophet in Samaria who would cure him of his leprosy. When Naaman tells his king what the young girl said, the king sends him off to Israel with a letter of introduction and silver, gold and other items as a payment to the prophet.

Naaman presents the letter to the king of Israel. The Israelite king is suspicious and fearful that the Syrian king has made a request of him that will be impossible to fulfill. He is convinced that the Syrian king is intent on seeking a pretext for war. (2 Kings 14:5b-7)

It is then that Elisha receives word that the king of Israel has basically become unhinged. Elisha intervenes and messages go back and forth. He tells the king to send Naaman to him.

Naaman arrives with his horses and chariots. Elisha does not meet him. Instead, he sends a messenger with instructions for Naaman to wash himself in river Jordan seven times.

To say that Elisha’s action and instruction infuriates Naaman would be an understatement. Naaman expects something more. He tells Elisha’s messenger, “I thought that for me he would surely come out, and stand and call on the name of the Lord his God, and would wave his hand over the spot, and cure the leprosy.” (2 Kings 5:11)

It would seem that we are not unlike Naaman. We expect the same whenever we yearn for our own healing. We want God to have someone wave his or her hand “over the spot” and heal us.

Rather than heed Elisha’s instructions, Naaman becomes angry and goes away in a rage. He clearly misconceives God’s actions through Elisha, both on a personal level and a nationalistic level. He expects his wealth and power are reasons enough that he will be able obtain a cure. His pride then prevents him from seeing God’s providential acts conveyed by his own servant, by Elisha’s messenger, and by Elisha himself.

When the servant girl persuades him to do as Elisha instructed, Naaman is healed immediately. (2 Kings 5:14) In the end we see God’s providential care for all people and as a witness to Naaman that faith in God is not based on one’s national identity. (Op. cit., page 198)

Throughout much of history, Israel and Syria were enemies. It remains so to this day. Nationalistic pride reared its head when Naaman spoke disdainfully about the Jordan in contrast to the ‘rivers of Damascus.’ (Preaching Through the Christian Year C, Craddock, Hayes, Holladay & Tucker, Trinity International Press, Harrisburg, Pennsylvania, 1994, page 322) But, as we have seen, the Israelite prophet heals a foreign general. It is a point that will occur over and over again in the account of Jesus’ life when outsiders – tax collectors and sinners, foreigners including Roman soldiers come to him and he accepts them and heals them.

The story of Naaman is the story of a God who has the capacity to cross boundaries and borders to be inclusive of all. It is a story that Jesus told to those bent on rejecting others. He said, “There were also many lepers in Israel in the time of prophet Elisha, and none of them was cleansed except Naaman the Syrian.” (Luke 4:27)

Finally, the story of Naaman reminds us that faith in God knows no borders. Elisha reminds the Israelite king that what matters most is not his authority as a prophet or even his power to heal. What matters most is the response to what is God’s power at work in the world.

The miracle was not simply that Naaman was healed of his leprosy but that he returned to Elisha and stood before him and said, “Now I know that there is no God in all the earth except in Israel.” (2 Kings 5:15) It was a confession not only of a miraculous healing but a confession of faith in a “God Without Borders.” (Ibid.)

It is a confession of faith we make as we come to the table that has been set before us. Around this table, there are no borders.