I was due for a medical procedure the following day and was told by my physician to make certain that I did not eat anything the night before. It was okay to drink liquids, lots of liquids, but no food. 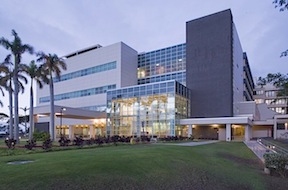 I went to bed at around 11:00 p.m. and over the course of the next hour discovered that I was not able to relieve myself as the night went on. I tried and tried and tried and as my condition grew more and more painful, I finally drove myself at 1:00 a.m. to the emergency room at the Maui Memorial Medical Center.

I described to the person checking me in how I was feeling. I was asked to take a seat and after what seemed like an interminable length of time, I changed out of my clothes and was asked to wait on a bed that was provided. The nurse drew a curtain around the bed and I was left alone for almost an hour.

During that time I developed a very, very, very active prayer life as I waited and waited and waited. A nurse finally came in and explained that he needed to apply a catheter and that the staff thought I would be more comfortable with a male nurse.

I will always remember my response. In the best pidgin English I could muster, I said, “Brah, I really no care. Just do whatever you need to do.”

To which I responded, “Just do it. It can’t be any worse than it is now.”

As soon as the catheter was inserted, it felt as though a miracle had occurred. The result was instant relief.

Now at the risk of sounding sacrilegious the only thing I could say was, “Thank you, Jesus!” As amusing as it may sound, I was deeply, deeply thankful.

I learned later that I had joined the club of aging men diagnosed with prostatitis and that the source of my distress would require further treatment and has ever since. For the moment, I was fortunate that all it took was a plastic tube and bag to relieve the immediate pain.

As human beings, our struggle with pain and suffering is grueling. “It taxes us when we learn of pain and suffering in the world, it exhausts us to witness the suffering of another, and it is acute when we suffer personally.” (Feasting on the Word, Year B, Volume 1, Bartlett & Taylor, Westminster/John Knox Press, Louisville, Kentucky, 2008, page 338)

And if we suffer over an extended period of time whether minutes, hours, days or years, relief is our sole desire. That is the case for Naaman, a general in the Syrian army who is afflicted with leprosy.

Naaman’s desire for relief prompts him to call upon the king of Aram for help. He learns from a young slave girl from Israel who attends to his wife that there is a prophet named Elisha, in Samaria, who could cure him of his leprosy. Naaman grows anxious.

It is his desire to control his suffering. In many ways we are not unlike Naaman. We also want to control our suffering. We rely on modern medicine to “examine, recognize, analyze and define” our diseases and illness.

In all fairness to Naaman it must be said it is laudable that he seeks to be in control of his own suffering, but there is something to be said about Naaman’s expectation of his healing journey and the manner in which it differs from God’s care. His desire to be in full control prevents him from seeing that the center of life and of wholeness and all healing is in Ke Akua’s providence.

The center of God’s care for Naaman comes from the voice of an anonymous girl and the simple act of a healing wash. It is the girl who offers a witness of her faith when she says to Naaman’s wife, “If only my Lord were with the prophet who is in Samaria! He would cure him of his leprosy.” (2 Kings 5:3)

Even after learning of the prophet, Naaman does not set out to find Elisha. Instead he ignores the words of the young slave girl and takes with him a letter from the king of Aram to the king of Israel. He also takes with him ten talents of silver and six thousand shekels of gold and ten sets of garments as payment.

Naaman is determined to be in control and in that way we are not unlike him. We see in him our own propensity to control when and in what ways relief comes to us.

With all of his money and power in tow, Naaman arrives with his horses and chariots at Elisha’s home. He is astounded and angered when Elisha sends a messenger to him telling him to “go, wash in the Jordan seven times, and your flesh shall be restored and you shall be clean.” (2 Kings 5:10) 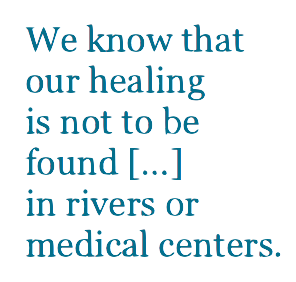 With all his money and power, with all of his fame and prestige as a commander of a great army, Naaman expects that Elisha would come out and stand and call on the name of his God, wave his hand over him, and cure his leprosy immediately. But Elisha does not do that. Enraged, Naaman turns away.

But his servants remind him that if Elisha asked him to do something difficult, would he not do it? What harm is there in washing? So Naaman heeds the words of his servants and immerses himself in the Jordan seven times. He is healed and made clean.

Naaman’s struggle to be in control of his own pain and suffering is our struggle. Like Naaman, we again seek to control when and in what ways relief comes to us but we know that our healing is not to be found simply in kings or doctors, wealth or money, protocols or procedures, rivers or medical centers.

Instead our healing comes from God’s providence through the words of a young slave girl and a lowly prophet, the encouragement of servants and the simple act of washing. As I sat in the emergency room that morning over five years ago, I had time enough to close my eyes, to take deep breaths and to be in prayer.

There was no one there to offer any words of encouragement. There was nothing I could do except remind myself that “for Naaman and for all of us, God’s providence constitutes the center of all life, wholeness and, ultimately, all healing.” (Church Dogmatics, IV/3.2, Karl Barth, G.W. Bromley & T.F. Torrance, Editors, T. & T. Clark, 1957, page 886)