It would not be until years later that my mom and I would speak about what had happened.

“You were 3 years old when grandpa took you,” she said.

“Did he ask you if it was okay for him to take me?” I asked. 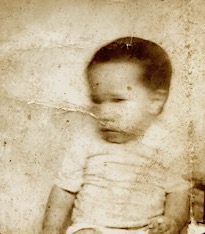 Almost forty years had passed when my mother and I had that conversation. Her health was in the decline and I thought it was time to put to rest some of the “skeletons” that inhabited our family closet.

My grandfather raised me from the age of 3 until I was 13 years old. Somewhere along the way he went through the process of legally adopting me. After he died, my mother became my legal guardian again. (Ed.: photo to the right—or above, if you're reading this on a mobile device—is of Kahu at 2 and 1/2 years old.)

Looking back over the years I realize now that the psychological distance my mother and I had grown with the passing of the years. But as we grew older some of that distance diminished as we found our way back to each other.

It occurred to me the first three years of my life with my mother were the critical years of my own development as a child – emotionally and cognitively and in terms the development my motor and language skills.

I grew up in a blended family. My mother and father never married. Eventually, she did marry but later divorced and then remarried. From both marriages I have three brothers and a sister.

We carry between the five of us the names of three branches of our family tree – Alika, Evangelista and Hiraishi. I also count my father’s two daughters and son as my siblings. So Kitsuki is the fourth branch of that tree.

It took a bit of mental gymnastics for me make sense of my family tree. Sometimes, it felt as though it was not simply a family tree but a family forest. I always thought that one of the primary reasons I was able to find my way through that forest was the fact that at least for the first three years of my life, there was the stability of my relationship with my mother.

Last Sunday, I asked our keiki, our children if any of them had seen the Walt Disney movie “Lilo & Stitch.” Half of them raised their hands.

“Do you remember what the movie was about?” I asked.

“It was about family,” someone responded. “‘Ohana means family. Family means nobody gets left behind or forgotten.”

As confusing as my life within a blended family may have seemed to others, no one was left behind or forgotten. Many of you know that I continue to look upon the “zero tolerance” policy on immigration that led to the separation of children from their parents along the U.S./Mexico border in April and May as inhumane and reprehensible and deeply personal. I know some believe that the separations were justified in light of those who are convinced that an “invasion” and “infestation” is sure to come if we do not stop the horde of refugees and immigrants at the southern border of the country.

An American television network host had the audacity to say, “As more illegal immigrants are rushing the border, more kids are being separated from their parents and temporarily housed at what are essentially summer camps” (Laura Ingraham, June 19, 2018). Nothing was said about those who were legally seeking asylum.

While the number of children who were separated was initially reported at around 2,300, we are now hearing it was upwards of 3,000 children. According to Robert Guadian, an Immigration & Customs Enforcement (ICE) official, children under the age of 5 were taken to 23 facilities in 13 states. Alex Azar, U.S. Secretary of Department of Health & Human Services, reported last Thursday, July 5, 2018 that of the 3,000 under his department, at least 100 are under the age of 5. The latest report is that at least half of the children under the age of 5, thankfully, have been reunited with their parents.

But sadly, the damage may have been done, especially for children under the age of 3. Numerous assessments have been made by pediatricians, psychologists, social workers, and others about the trauma such separations have caused.

The children are the collateral damage of an action guided by a policy that was apparently meant to deter immigrants from crossing the border at the expense of the lives of thousands of children. I know that there are those who will excuse the action that was taken by pointing out that it was quickly rescinded by an executive order. But we know now that there was no clear plan of what was to happen once the families were separated.

If, as some have said, being separated and detained is like going to “summer camp” - or as someone else added, “It is like going to boarding school” - if that is the case, if you are a parent or a grandparent, then why not consider sending your child or grandchild to such a “camp.”

It would be impossible not to consider the effect such a separation would have on our own children.

“Oh,” some protest, “We are not illegal immigrants. We do not need to send our children away to such a camp.”

True. But a summer camp? How could it hurt? I ask you. Make a deal with the government to have your baby or child placed under the care at one of these “wonderful” facilities where they will get three meals a day, attend school, have play time and where they will be able to call and speak with you at least once a week.

How can it hurt?

Lilo reminded Stitch, “‘Ohana means family. Family means nobody gets left behind or forgotten.” Then she added, “But if you want to leave, you can. I’ll remember you though.”

Family means nobody gets left behind or forgotten. Nobody is separated. So we cannot, we must not forget the children.

Much may be said about today’s reading from The Gospel According to Mark including Jesus’ rejection at Nazareth and the subsequent call of the twelve disciples to do what he had been doing himself: preaching repentance, casting out demons, and healing others (Mark 1:14-15; 1:32-39; 3:7-12). But what struck me about Jesus’ rejection in Nazareth was the resentment leveled at him in relationship to his own family.

“Is not this the carpenter, the son of Mary and brother of James and Joses and Judas and Simon and are not his sisters here with him?” (Mark 6:3). Those who rejected Jesus’ authority to teach and to heal took offense and focused their disdain and resentment on his family.

What would Jesus do (WWJD) if he were to look upon the plight of immigrant and refugee children seeking entry in the U.S.? “What would Jesus say (WWJS) to the children of the world at the borders between Syria and Jordan, between Israel and Palestine, between Myanmar and Bangladesh, between Eritrea and Ethiopia, between the U.S. and Mexico.

Perhaps, the wiser question would be, “What would Jesus teach? (WWJT). Matthew records the following teaching:

“Then little children were being brought to [Jesus] in order that he might lay his hands on them and pray. The disciples spoke sternly to those who brought them; but Jesus said, ‘Let the little children come to me, and do not stop them; for it is to such as these that the kingdom of heaven belongs.’ And he laid his hands on them and went on his way” (Matthew 19:13-15)

Some would argue that Jesus was not teaching the people about any public policy on the treatment of children. I agree.

But Jesus was teaching the people about compassion. The lesson was and is moral, not political. It is a lesson that is at the heart of the faith we proclaim. Would any of us count ourselves among the twelve who were sent out preaching repentance, casting out demons and healing those in need of healing?

“‘Ohana means family.” No one gets left behind or forgotten.